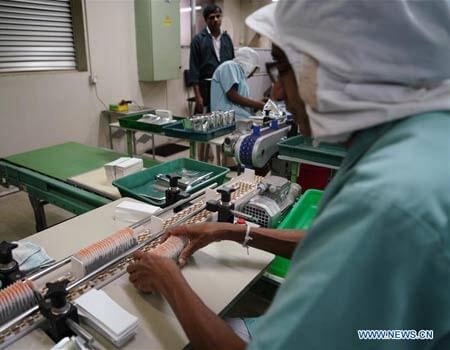 Staff members work on the production line of organic teas at Stassen Exports Private Limited in Colombo, Sri Lanka, Oct. 28, 2019. One of Sri Lanka's biggest tea producers is aiming to promote organic Ceylon Tea in the Chinese market as the island country has the world's first certified organic tea garden in the Central highlands, an official from the company said here Thursday. (Xinhua/Tang Lu)

COLOMBO, Oct. 31 (Xinhua) -- One of Sri Lanka's biggest tea producers is aiming to promote organic Ceylon Tea in the Chinese market as the island country has the world's first certified organic tea garden in the Central highlands, an official from the company said here Thursday.

Alex David, manager of the Tea Department at Stassen Exports Private Limited, told Xinhua that Stassen owned the world's first certified organic tea garden in Haputale, and in recent years there has been an increased demand in such type of Ceylon Tea globally.

David explained that in this tea garden, only organic fertilizers are allowed to be used and currently all their organic tea productions had been sold off.

"We established this organic tea garden in 1984 as our chairman had a strong vision to go organic. Today we are proud to say that we are the pioneer producers of organic teas in the world," David said.

So far, Stassen has produced an estimated 200 to 300 metric tons of organic tea which comes in flavors of black tea, green tea and organic hand made tea.

David explained that all stocks had been sold off as there was good potential in markets such as Europe, China, Japan and the United States for organic tea.

As the China International Import Expo (CIIE) to be held next month, David said they hoped to promote their organic tea and other brands of Ceylon Tea further into the Chinese market, in order to increase exports as the Chinese market held great potential.

"We really appreciate China giving us a platform such as the CIIE to promote Ceylon Tea as there is very good potential in the Chinese market. When we started 30 years ago, our export market to China was very small and now it is growing immensely, especially due to our popular flavors such as Jasmine Green Tea, Black tea, Lemon Green Tea, Passion Tea etc," David said.

Stassen Exports Private Limited that produces 10 percent of Sri Lanka's total tea production participated in the CIIE last year and will attend the event this year.

Annually, Sri Lanka produces an estimated 330 million kg of tea out of which 30 million kg is produced and exported by the Stassen group into several international markets including China.

David explained that this year, at the CIIE, they hoped to educate the Chinese customers on how to brew Ceylon Tea as many international customers were unaware of how to extract the perfect taste.

"It takes a while for us to educate our international customers on how to brew Ceylon Tea so this time at the CIIE we hope to have an educational session as well. In the recent past there is a growth for leafy teas especially among the Chinese youngsters. They also have a liking for our flavored teas such as Passion Fruit, Peach, Jasmine etc. So we need to create awareness on how it has to be made to extract the maximum flavor," David said.

Sri Lanka's tea exporting is one of the largest foreign exchange earners in the country with exports hitting the 1 billion U.S. dollar mark by September this year, data from the Forbes and Walker Tea Brokers showed recently.

Tea export volumes in the first nine months of this year increased by 4.15 percent to over 200 million kg compared to last year.

Iraq emerged as the leading tea importer of Celyon Tea followed by Turkey and Russia. Other noteworthy markets were Libya, China, Azerbaijan, Syria and the United Arab Emirates.