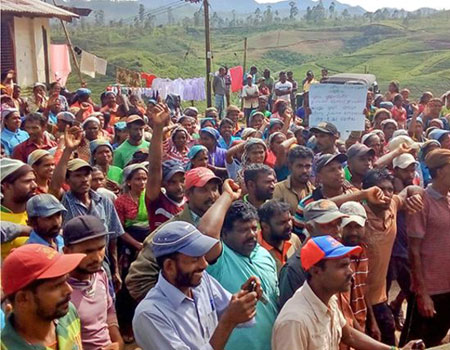 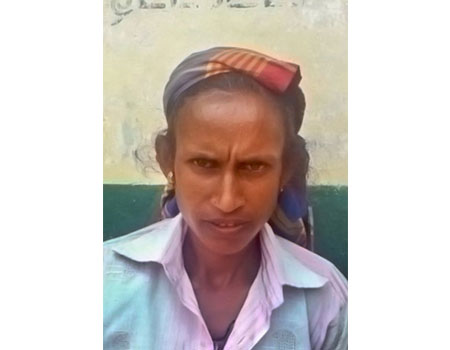 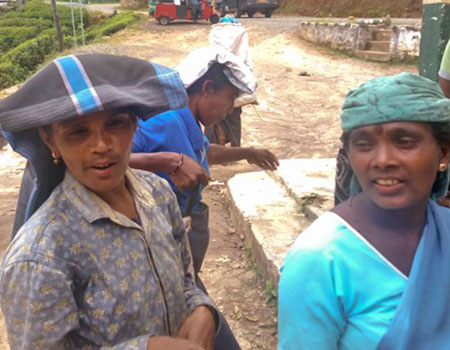 Plantation workers in Sri Lanka’s Nuwara Eliya district are intensifying calls for a 100 percent wage rise as the spending power of their poverty-level wages is eroded by the rapidly rising cost of living.

Early this month more than 1,000 workers from Brunswick and Murray plantations and nearly 600 workers from the Mocha and Gartmore plantations in Maskeliya protested near their estate factories. They held placards demanding that their wages be increased from 500 rupees ($US2.94) per day to 1,000 rupees.

The protests were initiated by the National Union of Workers (NUW), following a demonstration and meeting at Talawakelle involving seven unions, including the NUW, on September 23. The unions organised these protests out of fear that they could lose control of estate workers’ growing demands.

Many estate union leaders, including P. Digambaram who heads the NUW, are ministers in the Sirisena-Wickremesinghe government and endorse its social austerity program and cuts to workers’ conditions.

The collective agreement between the unions and the Regional Plantation Companies (RPC) expires this month. While plantation workers are demanding a 1,000-rupee wage, the unions have called for a “reasonable increase”—i.e., an increase that will protect company profits.

Planters Association of Ceylon chairman Sunil Poholiyadde recently told the Daily Mirror that the peak body has proposed a miserable 10 percent or 50-rupee wage rise. The association, he emphasised, however, wanted “a different model based on productivity and share of revenue.”

Addressing the association’s annual general meeting on October 5, Poholiyadde praised the unions over last agreement, pointing out that they supported “a productivity-based wage structure” and agreed “to look into a revenue share model.” The revenue sharing system, he stressed, needs “to be aggressively pursued for the sustainability of the industry” and hoped that the unions would support and implement this program “aggressively.”

Under the estate revenue share (share-cropping) system, around 1,000 tea bushes are allocated to a workers’ family, who must tend the crop and sell the produce to the estate. The company deducts expenses for the tools, fertilisers and other inputs it provides and then claims its profit rate. The remaining portion is given to the worker.

While the union bureaucrats make demagogic speeches at protest rallies about defending workers’ living standards, behind the scenes they are preparing to sign a collective agreement that would ruthlessly implement the companies’ demands.

Mocha Estate workers spoke with World Socialist Web Site reporters about the difficult hardships they confront, voicing anger against the unions, the companies and the government.

One worker said: “The government and plantation companies have refused to increase our wage. Why does the government treat us as second-class citizens? Without a fight we won’t be able to even get a small wage increase. In 2016 we struck for 10 days but the trade unions betrayed our struggle and subordinated us to a 50-rupee increase per day.”

Another worker explained that the unions had supported increases in productivity. “If we cannot reach our target of 16 kilos of tea leaves per day we don’t get the 140-rupee allowance,” he said. “Last month, most workers only got only 4,000 rupees, after deductions. When we complained to the unions they said the agreement was based on those conditions. The unions secretly negotiate with companies without consulting us and we don’t know what they are discussing.”

In the 2016 wage deal, the unions agreed to implement the revenue share system but this has met enormous resistance from plantation workers, so only a handful of companies have been able to implement it. While it has been introduced at Tillary estate, Battalgala estate of the Kelani Valley Plantation and some other plantations, workers have started to reject the system.

At Tillary estate in Dickoya, 80 workers have handed back plots they were allocated and are now working under the previous wage system. A Tillary estate worker told WSWS reporters: “Under this revenue sharing system we will become debtors.”

The unions, however, continue to campaign for this socially regressive scheme, falsely claiming workers will benefit from revenue sharing.

During the Brunswick workers’ protest, NUW organiser K.Thyagarajah demagogically declared: “If the plantation companies refuse to give a reasonable wage increase then we have to demand that they divide up the estates and give it to the workers to manage.” A. Raveendrarajah, a member of the NUW local council in Maskeliya, justified the revenue share system, claiming that workers “will increase their income under this system.”

K. Theresa, a Mocha Estate worker and mother of three children, told the WSWS: “We can’t tolerate this cost of living. Our wage is not even enough to buy the food we need and we don’t have enough money to pay for our children’s education. We are forced to borrow money. This time we can’t accept less than 1,000 rupees per day. We voted for this government but they forget us.”

Punithawathy, from same estate, said workers had to pluck 16 kilos of tea leaves per day just to get a wage of 730 rupees. “If we’re unable to do that they cut our pay. I got only 4,000 rupees last month and my husband also received the same. How can we live? We have four children and for their education we need at least 20,000 rupees a month. The trade unions are useless. They are not fighting for our rights.”

Wijeluxmi said housing conditions on her estate had worsened. “My house and the homes of seven workers were damaged in a recent landslide. We were displaced and had to take refuge in a school,” she said. “After returning, we are now living in the same damaged houses and nobody helps us to build or repair these houses.”

She said a trade union representative visited the workers after they were displaced, gave some rice and biscuits, and then vanished. “How can we spend money building houses when our wages are not even enough for food?” she asked, adding that workers must travel 15 kilometres to Maskeliya to purchase basic necessities, spending 80 rupees each time they made the trip.

Vadivel Ganeshan, a tea factory worker from Brunswick estate in Maskeliya, rejected union leaders’ claims about the revenue sharing system. “Under this system,” he said, “we will be compelled to make our children and elderly parents work. The companies will try and exploit whole families. All workers must come forward and oppose this system.

“The trade union leaders join with the government, get ministerial positions and then enjoy a life of luxury. During one election an NUW leader came to our estate and laid a foundation stone to build a bridge. It’s now nearly four years since then and nothing has been built. Hundreds of students have to use a risky bridge and in the rainy season it’s very dangerous.”

Ganeshan said some workers on his estate decided to stop paying their union dues and have established a separate committee to solve the problems they face.

WSWS reporters discussed this important political development with Ganeshan. They explained that estate workers could fight the government and employers’ attacks only by breaking from the unions, building action committees and uniting plantation and other workers on the basis of a socialist and internationalist program.