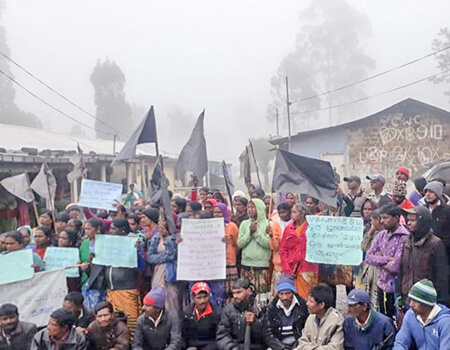 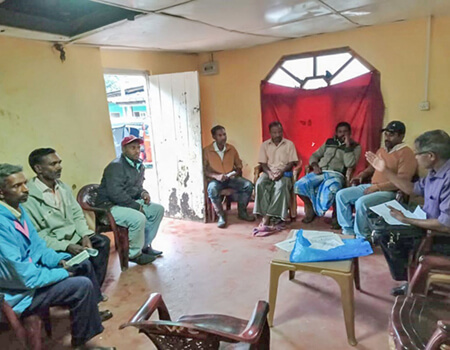 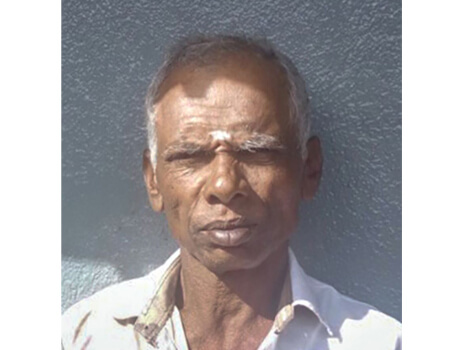 Hundreds of plantation workers at tea estates in Hatton, Maskeliya and Nanuoya in the Nuwara-Eliya district walked out on strike this month in protest against wage and allowance cuts and increased production targets imposed by Regional Plantation Companies.

Fearing that the strikes would rapidly spread throughout the plantations, senior CWC and NUW officials immediately moved to stop all industrial action. CWC leader Jeevan Thondaman, who is President Gotabaya Rajapakse’s current state minister for plantation housing and community infrastructure, and P. Digambaram, the leader of NUW and the previous government’s minister of plantation infrastructure, personally intervened to stop the strikes.

Both officials offered worthless promises to the plantation workers, claiming that they would resolve the issues by “discussing with plantation management.”

As well as cutting wages, plantation management is demanding even higher production rates. At the Uda Rathalla Estate, the daily tea plucking target is 18 kilos per worker, but as one female picker told the media, “if we pluck one kilo less than the daily target we are only paid a half day’s wages, that is 350 rupees [$US1.89].”

Another worker said, “We told the Assistant Labour Commissioner and the trade unions about these unjust work demands but nobody cares about that; they are all supporting estate management.”

Strathdon estate workers have to pluck 19 kilos per day but if they fail to pluck at least 12 kilos they only receive a half-day’s pay. Workers said that all the unions, including the CWC and NUW, held discussions with the Assistant Labour Commissioner at Hatton and the plantation companies, and agreed to the cuts at Strathdon and at Strathspey Estate, where the daily target is 18 kilos.

The 2018 collective agreement signed between the plantation unions and the companies included increased productivity demands and wage cuts, which have been systematically imposed by management over the past 18 months in the face of mounting opposition from workers.

The “revenue share” or out-grower system being proposed by plantation companies is another component of management demands for higher productivity in Sri Lanka. Under this exploitative scheme, a single family is given a piece of land with about 1,000–1,500 tea bushes.

Workers and their families have to maintain and harvest the tea. Although the company provides fertiliser and agricultural chemicals, this cost is deducted from the revenue earned from the tea harvest. All retirement benefits, such as the Employees Provident Fund (EPF) and Employees Trust Fund, are abolished under this system.

Not only that, but plantation companies are moving to evict the workers and their families from the estates and force them to live in “new estate villages.” This means that the provision of limited housing, healthcare and education facilities, under the existing arrangements, will end.

In December 2018, the plantation unions betrayed a struggle of 200,000 estate workers who walked out on strike to demand that their daily wage be increased from 500 to 1,000 rupees. In a crude attempt to win the votes of estate workers in the last general election, Gotabhaya Rajapakse and the CWC leadership made a series of bogus promises to grant workers’ demands for a 1,000-rupee daily wage.

Plantation workers told WSWS correspondents that the new work targets were extremely difficult because many of the estates produced less tea as a result of poor maintenance.

As one Strathspey estate worker explained, “Management is not interested in clearing the estate. The grass has grown and it’s difficult to walk among tea bushes and we are attacked by snakes and wasps. This year several workers died from wasp attacks. Fertiliser and anti-fungal chemicals, which are required for the healthy growth of the tea bushes, are not being used and there are fewer leaves. This means that the daily target cannot be achieved.”

Mohanraj, from Strathdon estate, said: “Forty hectares of this estate have been abandoned and not cultivated and another nine hectares have been granted to a private businessman. The remainder of the estate is too small. This means less leaves and less income, and wages so low that we can’t even buy essential items.

“Therefore, most of the workers from here go to Colombo in search of jobs and the women go to the Middle East. When we went on strike both [CWC leader] Jeevan Thondaman and [NUW leader] Digambaram came here and told us to stop the strike, but they provided no resolution to our demands. The unions all back the government and the companies, otherwise the companies could not act this way.”

Mohanraj said he supported the World Socialist Web Site’s call for workers’ to break from the unions and form action committees. “We ourselves have to organise the struggle to win our rights,” he said.

Bhavana, from Strathspey estate, said management’s daily production demands could not be reached, even if workers were on the job for eight hours without a break. “These targets cannot be met in the rainy and drought periods. When our wage is cut, both our EPF and bonuses are also cut,” she said.

While the Sri Lankan tea industry has faced a deep crisis since 2014, this has been exacerbated by the COVID-19 pandemic. Much of the country’s tea is purchased by Iran, Iraq, Turkey and Russia. In the first six months of 2019, 129 million tons were exported to these countries. This declined by 14.5 percent during the same period this year.

Under bogus plans to “rescue the tea industry,” the Rajapakse government is planning to intensify its attacks on plantation workers.

Earlier this month, President Rajapakse told a meeting of the Presidential Task Force for Economic Resurgence that 10 out of 20 RPCs have been deactivated and that these estates should be granted to small tea holders, a proposal endorsed by the CWC, NUW and DWC. The government also plans to auction off some estate land for gem mining. These socially destructive plans will see thousands of estate workers and their families lose their jobs and accommodation and face economic destitution.