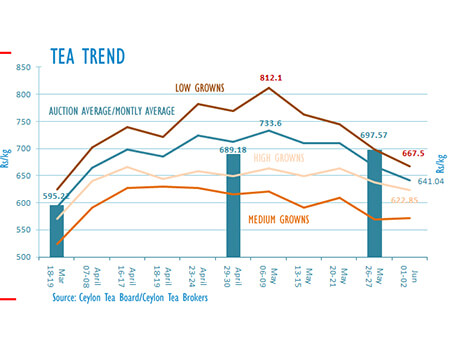 ECONOMYNEXT – Sri Lanka’s tea prices have fallen from Coronavirus driven highs seen in April and May as supply improved, and the rupee strengthened, but prices are still somewhat stronger than pre-Covid-19 levels, data show.

Sri Lanka’s tea auction prices shot up in April and May after auctions were halted in May amid Coronavirus curfews and buyers scrambled to build buffer stocks, the rupee also fell as auctions resumed in April.

At the previous auction on June 01 and 02, Sri Lanka sold 6 million kilograms of tea.

The auction average price on June 02 had fallen to 641.04 from 724.25 rupees in April 2020 and 733 rupees on May 09. As auctions were suddenly stopped in March due to Coronavirus curfews, many buyers were short, and China, a tea consumer, was also coming out of lockdown industry officials said.

“Added to that, there was a lot of panic within the exporters,” Johann De Zilwa, a tea trader at Van Rees Ceylon Ltd. said.

“The first e-auction started amidst a high uncertainty as to how they were going to secure quantity.

“Even in places like Russia, people who have their brands were very active and in fact, they were building a slight buffer stock too.”

Sri Lanka’s rupee also fell sharply after the central bank printed money and did not sell enough dollars to mop up excess cash in forex markets.

The rupee fell from around 182 to around to close to 200 to the US dollar at one time before the central bank intervened to sell dollars and mop up some of the rupees that were hitting forex markets after coming through the credit system.

But now the rupee is back at around 186 to the US dollar in June.

“This created a lot of pressure on price. However, since after, we have had favorable weather conditions and the crop has increased. ”

This week there was some interest in High Growns, De Zilwa said.

In the few exceptional teas where prices picked up, Low Grown OP/OPA and PEK teas showed gains of 15 rupees and PEK1 went up by 10 rupees.

Ex-Estate Best BP1’s showed a 10 rupee gain in price while OP1 was up by 20 rupees in this week’s auction with other teas declining for well over three weeks, according to historical data.

BOPF plainer teas were down 50-70 rupees while Nuwara Eliyas again saw next to no offerings and Uda Pusellawas sold around last week’s levels.

In Low Growns, FBOP/FBOP1 teas eased while Best, cleaner Below bests and cleaner teas at the bottom sold around last week’s levels

IN FBOPF/FBOPF1 categories, very tippy teas continued to attract good demand. Best together with cleaner below best were firm on last. Others were lower following quality.

Select the best and best FF1’s were easier. Best and cleaner below best maintained. Others were irregularly lower following quality.

High grown BP1 prices were firm while PFIs declined 20-40 rupees at the start of the auction which then picked up slightly as the sale progressed.

In Mid grown BP1s, better sorts were firm while the poorer sorts declined almost 30 rupees. Clean leaf and coloury PF1s gained by 10-20 rupees in the auction.

Low grown BP1s were irregular and barely steady in prices as PF1s declined up to 50 rupees a kilogram. (Colombo/Jun15/2020)