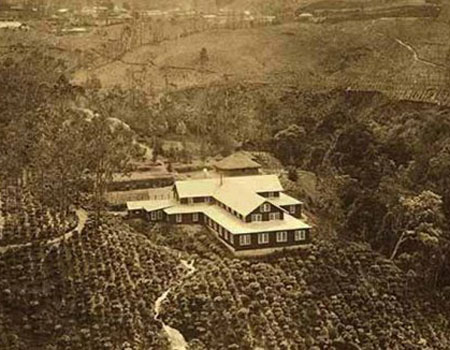 Sri Lanka is an island country that lies in the Bay of Bengal just below the southeastern tip of India. From 1815 until 1948, it was a British colony called Ceylon. In 1972, the once colony of Ceylon changed its name to reflect its independence. The name that didn’t change, however, was that of Ceylon Tea. What happened?

In this article, we will go back in time and explore the history of this much-loved beverage and why, as of 2019, the name “Sri Lanka Tea” still hasn’t caught on!

Where It All Began

Sri Lanka Tea was the product of failure. Specifically, the failure of Coffee. In 1820, the region of Kandy, the last indigenously-ruled area of the island, fell to the British. Though a victory for the British Empire, it came at a very literal cost. Maintaining the military presence and infrastructure necessary to secure it had led to economic woes.

Coffee quickly became the answer. In 1824, Colonial Governor Edward Barnes ordered the expansion of Sri Lanka’s Coffee Industry to further British interests. The plants originated from what is today the Central Province, but soon spread across the island.

Unfortunately for the British, it was short-lived. In 1869, the first signs of a plant-based disease called Coffee Rust took hold of a plantation in Madulsima. Over the next decade, the industry fell into turmoil. Britain, it seemed, had no way of stopping the forces of nature.

Years earlier, the potential for economic salvation had started not in the highlands of Sri Lanka but those of Scotland. In 1835, James Taylor, who would later become a Sri Lanka Tea planter, was born. He first arrived in the British colony in 1852 and was immediately inspired by his surroundings.

“You may think I write too much about the scenery,” said Taylor in a letter home to Scotland, “but if you could see it for yourself, you would understand why I write so.”

Before the outbreak of Coffee Rust, Taylor had already planted 19 acres of leaf Tea at his Loolecondera Estate in Kandy. In 1873, three years after the outbreak, Taylor established a fully equipped Sri Lanka Tea factory. That same year, he made his first sale of Sri Lanka Tea.

At the time, of course, Taylor had no idea of the significance of his endeavours. Soon after, however, desperate Coffee planters from all over the hill country started arriving at his estate en masse. They wanted to learn the art of growing and manufacturing Sri Lanka Tea.

Success did not come easily. More than 120,000 hectares (300,000 acres) of dying Coffee land stood in the way. Planters had no choice but to strip their estates of countless Coffee bushes to make way for Sri Lanka Tea. Their exploits didn’t go unnoticed.

Sir Arthur Conan Doyle, the author of the Sherlock Holmes stories, was particularly impressed. In his short story, “De Profundis”, he wrote:

“A Rotten fungus drove a whole community through years of despair to one of the greatest commercial victories which pluck and ingenuity ever won. The Tea-fields of Ceylon are as true a monument to courage as is the lion at Waterloo.”

The Second World War (1939-1945) changed the world in myriad ways. The age of colonial rule was coming to an end. In 1947, India declared independence from Britain. One year later, Sri Lanka followed suit, although, at the time, maintained its name “Ceylon”.

By 1962, the country was, albeit temporarily, the largest Tea exporter in the world. Despite being a momentous achievement, this fact posed a problem. In 1972, when the island's name officially changed from Ceylon to Sri Lanka, the Tea it produced had become world-famous. Most people, however, knew Sri Lanka Tea as “Ceylon Tea”.

Changing the name of one of their biggest exports, the government concluded, could create confusion. Confusion, in turn, could see a dip in sales. The answer was simple: change the name of the country, keep the name of the Tea.

And so, the term “Ceylon Tea” has stuck around. Nevertheless, it is, technically speaking, “Sri Lanka Tea”. Whatever you personally wish to call it, the name has no impact on the extraordinary taste or Black Tea benefits of this remarkable beverage.

Today, Sri Lanka's Estates cover an estimated 4% of the island’s landmass. Varying elevations and climatic conditions, meanwhile, contribute significantly to its versatility. Indeed, no two Sri Lanka Teas are the same. They differ dramatically from region to region.

Sri Lanka’s Central Province hosts some of the best-known Tea-growing regions. This includes Kandy, Nuwara Eliya and Dimbula. Other thriving areas exist in Uva Province. Here at The Kent and Sussex Tea and Coffee Company, we stock Sri Lanka Teas from across the country. Why not try a few and find your new favourite morning cuppa?