Sri Lanka tea exports down 8–pct in Sept, prices up 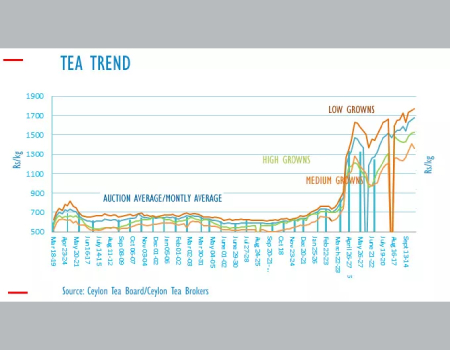 ECONOMYNEXT – Sri Lanka tea exports fell 8.02 percent from a year ago to 21.5 million kilograms in September 2022, but rupee and dollar incomes hit a record, Forbes and Walker, a Colombo-based tea brokerage said.

Sri Lanka’s tea sector has been hit by a ban on fertilizer and safe agrochemicals during the administration of President Gotabaya Rajapaksa.

Russia has secured second position with a total of 17.80 million kilograms, which is a 12 percent decrease against total imports recorded for January-September 2021, Forbes and Walkers said.

UAE sits in 3rd place with a total of 16.71 million kilograms followed by Türkiye, Iran, Libya and Azerbaijan during the period January-September 2022.