Sri Lanka tea exports down 10-pct in July; dollar and rupee earnings up 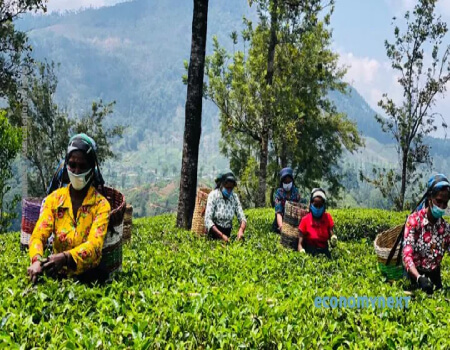 ECONOMYNEXT – Sri Lanka’s tea exports fell 10.91 percent from a year ago to 22.76 million kilograms in July 2022, though rupee and dollar earnings were up due to a currency collapse, industry data showed.

US dollar earnings were up 2 percent to 117.5 million dollars in July from a year ago, data from Ceylon Tea Brokers show.

The price of Tea in bulk per kilogram has increased to 1,610.35 rupees compared to 755.62 rupees in the same period last year.

In dollars terms, the total value of export from January to June is 702 million dollars, down 8.3 percent.

Sri Lanka’s tea sector had been hit by a fertiliser ban, apparently done to ‘save foreign exchange’ due to the operation of a soft-peg and also under the advice of the Government Medical Officers Association to increase the longevity of the population. (Colombo/Aug21/2022)