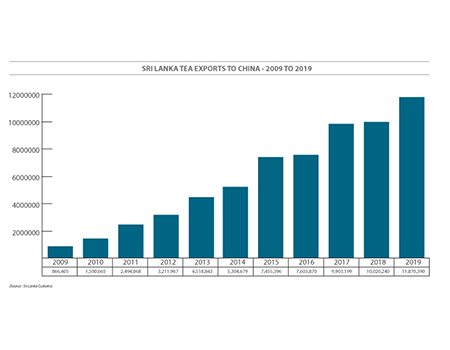 ECONOMYNEXT – Coronavirus is buffeting the short term demand for Sri Lanka’s Ceylon Tea with fears of second waves coming in while medium-term trends are driven by trends in some geographical regions, including China industry officials said.

Sri Lanka’s Tea Research Institute published some data citing a Taiwan study which said there may be some anti-viral properties in tea which may be helpful during the Coronavirus outbreak though it was not scientifically proven yet.

“In a recent study in Taiwan, the antiviral activity of traditional Chinese medicinal compounds were screened for SARS-CoV-2 (2) where they screened chemical structures of 64 compounds through a molecular docking study focusing on an important therapeutic target, namely the RNA- dependent RNA polymerase (RdRp), an important protease that catalyzes the replication of RNA from an RNA template,” the TRI said.

“If that can be blocked, by another molecule, SARS-CoV-2 would not multiply in the epithelial cells of the humans was the logic behind the experiment.

“Preliminary results suggest that out of the 64 compounds studied, Theaflavin was selected as the prime candidate for developing a SARS-CoV-2 inhibitor targeting RdRp.

“However, results are yet to be confirmed in vivo studies before they could be translated into clinical benefits.

“Theaflavins are antioxidant polyphenols that are formed during the enzymatic oxidation process in the manufacture of black tea. In the black tea manufacturing process this is commonly referred to as the “fermentation”.

“It is the black tea which is rich in Theaflavin in contrast to green tea due to the difference in the manufacturing process.”

An industry official said it was difficult to say whether hopes about supposed Coronavirus properties had any impact on the demand for Ceylon Tea.

“There was this new perception created along with the pandemic situation that tea is good for virus prevention,” Johann De Zilwa, a tea trader at Vanrees Ceylon Ltd, a Colombo-based export firm told EconomyNext.

“However, these are claims, and I would say that these perceptions would only influence consumption up to a certain extent and not a major shift.”

Sri Lanka tea price however soared in April and May when auctions re-started electronically due to health concerns, ending a 100-year tradition of manual auctions.

However, the price correction which followed kept the prices down for weeks after their initial pickup owing to economic factors in play.

But China, where Coronavirus originated, has seen a growing demand for Ceylon Tea in recent years. Earlier known for Green Tea consumption China is emerging as one of the top buyers of Ceylon Tea.

“Global demand for black tea has had a steady influence from China and is likely to show growth during the ensuing year as well, Forbes and Walker, a Colombo-based tea broker said in a market outlook for 2020.

“From a Sri Lankan perspective, exports to China have recorded a significant gain.”

A part of the reason may be growing domestic consumption in producer countries.

“Producer countries consumption is on the rise and consequently, lesser volumes of tea may be available for export which would augur well for prices of orthodox teas, in particular, with its limited supply,” the report said.

A trend that started with Chinese youth acquiring a taste for Sri Lanka’s black tea see in 2019 last year was seen during the lockdown period in 2020.

Meanwhile, China is on the verge of the second wave of Coronavirus as the Beijing market cluster was discovered and residents of risky areas locked down with travel restricted, foreign media reported.

For several years Sri Lanka’s strong-tasting low grown tea which is in demand in the Middle East and some Central Asian nations giving good revenues to small tea farmers, making the sector grow.

High Growns teas consumed in Western markets have are now the cheapest.

Sri Lanka’s high grown tea plantations had seen cost rise while prices have not kept pace, leading to losses whenever the commodity cycle turns or wages are hiked.

In the likes of a challenging pandemic situation and an inevitable global recession at hand, will a commodity like ‘Ceylon Tea’ survive?

“Cost of producing a kilo of tea in Sri Lanka is amongst the highest in the world. Rising input costs, declining productivity, uneconomic age profile in tea bushes, and high social costs have led to declining profits,” Forbes and Walker’s report stated further.

“Perhaps, higher productivity and cost reduction will have to be achieved for enhancing the
competitiveness of ‘Ceylon Teas’ in the world market in the medium to long term.”

Unlike in low grown sector where smallholders own their land freehold, there is heavy union and government interference in the larger plantations, which stops innovation or productivity gains, economic analysts say.

Uniform wages across geographical regions also stop labour from shifting to areas where there are shortages.

There are also other factors that may affect demand in the Western markets.

Most of Sri Lankan High Grown teas go into western countries in the form of teabags.

As of late, another growing trend has emerged leading some customers to stray from tea bags to loose leaf teas, industry officials say.

Researchers in Canada recently found out that some premium plastic tea bags leave ‘microplastic particles’ behind which might be harmful to health. (Colombo, June 23, 2020-sb)