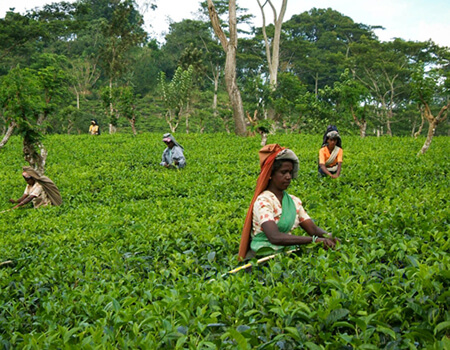 The Planters' Association of Ceylon, the lobby group for the RPCs, said it met with government and trade union leaders on 17 occasions to reach a deal, and is now calling for workers to produce two additional kilogrammes of tea a day or one additional kilo of rubber in return for the wage hike.

Trade unions have yet to agree on the proposed deal, the Planters' Association said.

Plantations and trade unions hold talks on changes to wage structures every two years, but the RPCs were forced to the negotiation table a year earlier on a presidential directive in January to pay a 1,000 rupee minimum wage from March 01, up from the existing 855 rupees.

The Planters' Association said alternative revenue-sharing or outgrower models which have been piloted have shown workers could earn 40,000-80,000 rupees a month as entrepreneurs who partner with RPCs, compared to the current 21,375 rupees or the proposed 25,000 rupees.

In low-country smallholder estates, 30 kilogrammes of tea is plucked daily, while in a 'Best Tea Plucker ' competition held recently, the winner plucked 19.4 kilogrammes in one hour, he said.

External conditions are currently not conducive for tea producing in Sri Lanka, with low prices at the tea auction in Colombo due to weak demand and high costs of production, Rajadurei said.

Weak oil prices and the coronavirus impact on the global economy is pushing demand for tea down in major markets in the Middle East and Russia, he said.

"Despite this, trade unions insist on sticking to such archaic wage models as the daily wage system which are rooted in a colonial past and best suited to the 1800s,"he said.

"This is an absurd position that does nothing for the workers themselves."

"As managers, we would like nothing better than to simply give 1,000 rupees a day or more, but given the fact that we are selling a product at a lower price than we are producing it, how could such a path possibly be sustained without throwing the entire industry, and the nation into further debt?"

"We are all experienced professionals who are legally bound to take decisions that will not result in our companies going into bankruptcy."

Rajadurai said the RPCs are asking for a marginal increase in productivity for the higher wage, but trade unions "are adamand that they want something for nothing, even if it collapses the industry."

He said given the impasse, RPCs are confident the government will intervene.

Plantations Industry Minister Romesh Pathirana has said that the Treasury would intervene if the two parties are unable to reach a compromise. (Colombo/Mar16/2020)