After a hiatus exceeding two decades, Sri Lanka is reviving bilateral trade with the second wealthiest economy in Gulf this week. 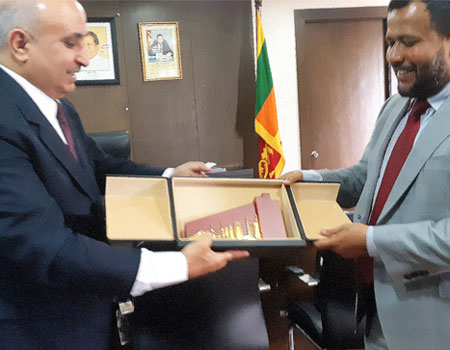 “We are reviving the Sri Lanka-Kuwait Joint Trade Committee after 21 years. This shall be a new turning point in the long-standing Kuwaiti-Sri Lanka relations” said the Minister of Industry and Commerce Rishad Bathiudeen on 4 October in Colombo. Minister Bathiudeen was addressing the Kuwaiti Ambassador to Sri Lanka (HE) Khalaf Bu Dhhair in Colombo during a preparatory discussion on the Second Session of Sri Lanka-Kuwait Joint Trade Committee that will open in Kuwait on 9 October.

Kuwait is the second wealthiest country (per capita at US $ 30,000) in the Gulf region after Qatar (IMF).

According to the Department of Commerce, an Agreement on Trade between Sri Lanka and Kuwait was signed in April 1994. The First Session of Sri Lanka - Kuwait Joint Committee Meeting was held in Colombo in March 1997.

“Kuwait is the 49th import partner of Sri Lanka while Sri Lanka is ranked as 82nd partner in Kuwaiti import basket by 2016. These data show there is great but unrealised bilateral trade potentials” Minister Bathiudeen said.

Sri Lanka’s total trade with Kuwait which was at US$ 46.68Mn in 2016 and has increased by 4% to US$ 48.56 Mn in 2017. Last year’s total Lankan exports to Kuwait were at US $33 Mn while imports totalled US $15 Mn. Overall trade between the two countries peaked to US $88 Mn in 2011 which drastically declined thereafter due to the drop in importation of petroleum oil from Kuwait. Sri Lanka’s leading exports to Kuwait this year so far have been Ceylon Tea, food preparations, fruits, nuts and other plant edibles, and Wood Fiberboard. Last year the top exports were Tea, edible preparations, desiccated coconut, wood and wood charcoal, and fish. Sri Lanka’s top imports from Kuwait this year so far have been mineral / chemical fertilizers, polymers (of ethylene), sodium hydroxide and petroleum oils, while 2017 top imports were plastics, organic chemicals, paper & paperboard, wood pulp and iron and steel. Petroleum has not been among imports (to Sri Lanka) from Kuwait till last year though this year (January-May) a very small volume of US$ 0.04 Mn has been imported after a long period of absence.

“This will be an important meet for both sides on trade and investment development. In fact this meeting with Sri Lanka is very important for us" said Bu Dhhair and added:"We are organising this meeting very well and in a big way with many important participants. The outcome of this meeting will be felt in the future. The Kuwait Chamber of Commerce and Industry (KCCI) and more importantly, the powerful, world’s fourth largest sovereign fund Kuwait Investment Authority (KIA) also will be there. There will be a focus on oil and gas industry too. Kuwait is not only an oil producer but is also a global distributor –we have more than 450 oil and gas stations across other countries -such as Belgium."