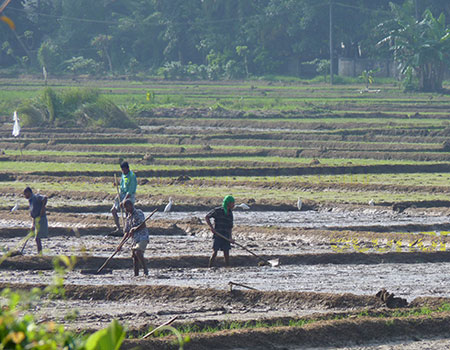 ECONOMYNEXT - Sri Lanka's economy grew 3.7 percent in the first quarter of 2019 from a year earlier, helped by the agriculture sector returning to normalcy, the state statistics office said.

The agriculture sector grew 5.5 percent from a year earlier, while the industrial sector grew 3 percent and services 4.1 expanded percent, the Department of Census and Statistics (DCS) said.

The implicit GDP price deflator was only 0.06 percent in the period, keeping nominal and real GDP almost the same.

Sri Lanka is recovering from a balance of payments crisis triggered by a soft-pegged exchange rate regime and weak demand has kept prices low, while agricultural prices have also fallen amid a production recovery. Inflation from the currency fall, tends to show up later as the economy recovers, analysts who study Sri Lanka's frequent balance of payments crises have said.

The highest growth in agriculture came from coconut, with the crop up up 35.6 percent from a year earlier.

There was low coconut supply in the first quarter of 2018, as crop growing was battered by the drought in 2017. Supply of coconuts returned to normal later in of 2018.

Meanwhile, paddy farming grew 13.1 percent in the first quarter of 2019, as it had shown some recovery a year earlier as well.

Fishing and tea growing recorded contractions during the quarter.

The industrial sector grew with manufacturing of coke and refined petroleum products rising 94.8 percent, as the country's sole refinery in Sapugaskanda had been closed for over a month a year earlier.

In services, telecommunications, and IT programming consultations and related activities expanded at 15.1 percent and 11.7 percent respectively, due to a growing IT/BPO industry.

Accommodation and food and beverage activities grew 4.5 percent, while wholesale and trade grew by 4.4 percent.

Analysts say that economic growth will fall sharply in the second quarter of 2019, as the country was hit by the Easter Sunday terror attack.