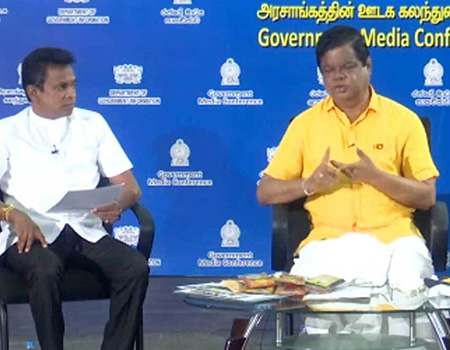 “If we make the country organic that is if we produce poison-free Agri products, we can double the current export revenue within the next two years at least,” Minister Gunewardene told reporters on July 21.

“Normally we have an annual export revenue between 10-12 billion dollars. If we make the country organic we can earn 20 billion US dollars in two years.”

Consumers in America, England, Japan, France, Sweden and Switzerland demand poison-free products (wusser wisen tho-rer) and are willing to pay more for such products, he said.

Sri Lanka President Gotabaya Rajapaksa has banned the import of chemical fertilizer from the next cultivation season and is encouraging the production of organic fertilizer, saying it cost 400 million dollars to import amid forex shortages and those agrochemicals also caused a kidney disease of unknown cause.

Farmers have protested shortages of chemical fertilizer in the current season and some agricultural analysts have warned that there may be sharp falls in some crops due to the lack of fertilizer of the right type and the right time.

Authorities have said farmers will be pay compensation for any crop losses from the lack of chemicals, with the funds now used to import subsidized fertilizer.

Sri Lanka has printed over 600 billion rupees in 2020 triggering a 2.3 billion US dollar balance of payments deficit in 2020 and a 900 billion BOP deficit up to April 2021. In addition to fertilizer and agrochemicals, a series of imports have been banned.

Sri Lanka has made a historic decision in banning fertilizer which could get higher prices including for traditional exports like tea Minister Gunewardene claimed.

“If we could export tea by not using chemical fertilizer or insecticides, then Sri Lanka Tea will get an unusual price,” he claimed.

“If we could make the country, a poison-free production country, then it is the greatest victory we can achieve in this century.”

State Minister of Development of Minor Crops including Sugarcane, Maize, Cashew, Pepper, Cinnamon, Cloves, Betel Related Industries and Export Promotion Janaka Wakkumbura said that chemical fertilizer is sparingly used in some spices and none at all in others.

Only about 50 per cent of cinnamon crops used fertilizer, while small amounts were used in Betel.

“Ninety-nine per cent of the pepper is grown without using chemical fertilizer,” Wakkumbura said. “So if we are able to get the organic certificate for pepper then we will get a high price for pepper in the world market.

“We don’t get the certificate because there is no recognition in our country as we use chemical fertilizer.” (Colombo/July21/2021)