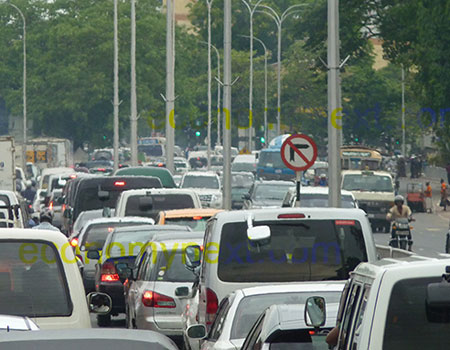 Import expenditure fell by 11 percent to 1.6 billion US dollars in April 2019 from a year ago while export growth rose only by 0.4 percent to 798 million dollars, a statement said.

Expenditure on merchandise imports declined by 11.0 percent to 1,596 million US dollars in April 2019 from a year ago, down for the sixth consecutive month.

“This decline was mainly due to lower imports of consumer goods and intermediate goods, particularly gold and fuel, despite an increase recorded in investment goods imports,” the statement said.

This was owing to the reduction in importation of motor cars with less than 1000 cc engine capacity, hybrid and electric motor vehicles reflecting the lag effect of policy measures introduced on importation of vehicles during the second half of 2018.

Sri Lanka's private credit had been flat or falling, which tends to reduce imports. In the absence of a credit collapse, if one good is discouraged (such as cars) money and credit will be diverted to other goods, to keep total imports up, especially if money is printed.

This is why Sri Lanka had balance of paymetns crisis in 2015 despite collapsing global oil prices.