Sri Lanka an island nation that is best savoured slowly 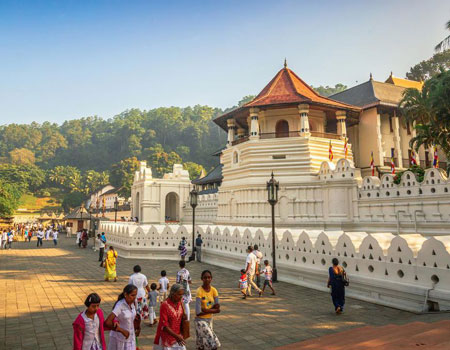 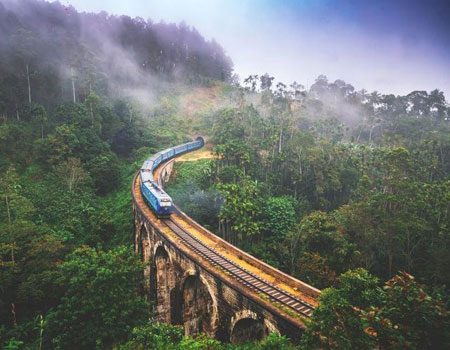 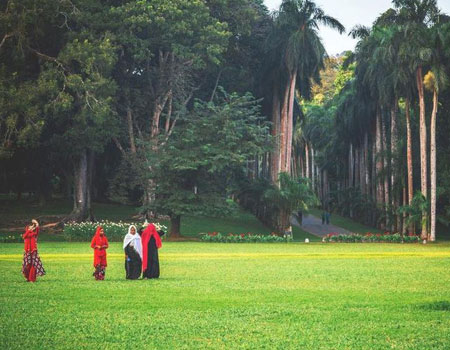 It’s common while travelling to be approached by locals trying to make a few bucks by offering to show you around. I typically respond with a polite “no,” but on this particular morning in Kandy, a city in the center of Sri Lanka, I was looking for someone to take me on a tour of the sights. Santha, a small, middle-aged man with a big smile, must have sensed it, because he made a beeline for me as I approached the small park near the Kandy Municipal Market on Sri Wickrama Rajasinghe Mawatha Street in the centre of town.

After a quick negotiation we were off, crammed into the back of a blue tuk-tuk, zooming down streets slick from the morning’s rain and smelling of wet leaves. Santha yelled to me over the loud buzz of the auto rickshaw’s engine: “I was born in Kandy, raised in Kandy and married in Kandy.” He added, “And I will die in Kandy!”

I could easily have spent months in Sri Lanka, the small island nation off the southern tip of India. Full of fantastic food, kind people and astonishing natural wonder, Sri Lanka is a place best seen slowly, even if you have only four days on the ground like I did. The train was my preferred means of transport (when I wasn’t in a tuk-tuk), winding from Colombo to Kandy, in the middle of the country, before taking another train down to Ella, on what was one of the most beautiful and scenic train rides I’ve ever experienced. And as far as cost goes, I was able to keep my expenses comfortably under control.

First, some logistics: A train trip in Sri Lanka requires planning. Many popular routes, including the one from Kandy to Ella, can sell out reserved seats weeks in advance. The Sri Lanka Railways website isn’t going to be much help here: You can reserve tickets only in person or through your local mobile phone. I consulted the website The Man in Seat 61 and eventually decided to place my trust in Visit Sri Lanka Tours to make my bookings.

My ticket in the observation car from Colombo to Kandy, with comfortable seats and a big picture window at the front of the compartment, cost 11 British pounds, or about $19 for the 2 1/2-hour ride. (The agency is based in Britain and charges in pounds, payable through PayPal.) I snagged the last reserved second-class seat on the Kandy-to-Ella route — this is with booking 20 days in advance — and paid 13 pounds for the more ponderous, nearly seven-hour jaunt through the green hills and tea plantations of central Sri Lanka.

The Airtel SIM card I purchased in India didn’t work when I landed at Bandaranaike International Airport on my SriLankan Airlines flight (about $240 for a one-way flight from Chennai, India). Luckily, I had bought an AIS travel SIM card for about $24 ahead of time, which is good for eight consecutive days of travel in more than a dozen Asian countries, including Sri Lanka. I can’t speak for service in the other countries on the list, but I had no trouble plugging it into my unlocked iPhone and using it over the next several days in Sri Lanka.

I picked up my ticket at Colombo’s Fort Railway Station and had just enough time to stop at the nearby Highland Milk Bar for a quick snack: a creamy chocolate milk from a glass bottle and a bag of chips cost me 120 Sri Lankan rupees, or about 90 cents. The first part of the ride heading east was unexceptional, but things changed around Rambukkana. Suddenly the air seemed heavier, and the vegetation became thicker and denser as we passed each successive train station, painted in muted pastels.

Pelting rain greeted us as we entered Kandy, once its own independent kingdom on the island until it fell victim to British colonial power in the early 19th century. I put on a poncho I’d brought for the occasion and walked down William Gopallawa Mawatha Street in search of my lodgings. “Gamage?” I asked passers-by, unsure how to pronounce the name of the family who was hosting me. Eventually, someone pointed me toward a fluorescent light inside a small grocery, and I sloshed toward it. A woman peered out the door and waved. “Peterson?” she yelled from across the street.

The lovely Gamage family (pronounced GAH-mah-gay), consisting of parents, children and extended family all under one roof, put me up for two nights in their home for about $13 per night, booked through the site Hotels.com. My room was basic but comfortable, and came with an outstanding breakfast spread every morning: curried mango, daal, beans, beets, rice, eggs and tea. Mrs. Gamage told me I could easily find someone in a tuk-tuk to show me around town.

When I found Santha the next day near the park (or rather, he found me), we quickly agreed on a price for a tour of the city: 2,000 rupees (a bit more than $15). “We have very good history here,” he said to me as the tuk-tuk labored uphill toward Sri Mahabodhi Maha Viharaya Buddhist temple, a little more than a mile from the town center. Sri Lanka is a majority Buddhist nation, and many of the culturally and historically significant places of worship are Buddhist.

After spending some time admiring the giant statue of Buddha that the temple is famous for (and paying the 250-rupee entrance fee), Santha, our driver and I made a few more stops in the area. Some were clearly an attempt to get me to buy something, but I didn’t mind: At the Pilimathalawa Tea Factory, for example, a quick and interesting tour of the grounds was followed by an elaborate tasting and sales pitch to try to get me to buy tea. When I bought a package of broken orange pekoe tea for 1,200 rupees — which I was going to buy anyway — the salesman immediately said that if I bought a second one, I’d get the third for free. He balked when I suggested he give me one package for 800 rupees, however, and I walked out with my single package of tasty, locally grown tea.

After a visit to a government-run medicinal garden and a stop for a quick beer (100 rupees buys you a local Anchor beer from the supermarket), we zoomed back toward town, Santha narrating as we went along. “Very dirty right now,” he said as we crossed a muddy-looking Mahaweli River. He asked me: Why would I choose to visit Sri Lanka now, during rainy season? I didn’t have a good answer.

The Royal Botanic Gardens was the final stop on our tour. Despite the relatively hefty entrance fee (1,500 rupees for foreigners, 60 for locals), I found the gardens a lovely respite from the traffic and hubbub of the area. They seem more like an arboretum than anything else, and I admired mazelike java fig trees, a towering smooth-barked kauri and a fascinating cannonball tree, which holds dozens of large, spherical fruits.

The food is wonderful in Sri Lanka; bright flavours, sharp spices and complex curries usually eaten with rice as the centerpiece. I thoroughly enjoyed the Flavors of Sri Lanka cooking class I booked as an Airbnb experience (about $30), with the friendly Chitra taking the lead and her daughter Hasara assisting. Learning about the different spices and produce was a delicious and elucidating education, like gotu kola, an herb, and goraka, a small, sharply acidic fruit that’s commonly dried and used to flavour meat and fish.

A 400-rupee tuk-tuk ride from Chitra’s house on the western side of town took me to Sri Dalada Maligawa, or Temple of the Sacred Tooth Relic (1,500 rupees admission) just in time for the 6:30 p.m. puja, or worship ceremony. Hundreds of people packed into the temple, fragrant with flowers and ringing with the rhythm of drums beaten by men in traditional dress. After the puja, I wandered north along a narrow moat until I came to a man standing in front of an old, regal-looking building. He introduced himself as Vipula, and we chatted about the building, which was the residence of Kandy’s king until the British seized the kingdom in 1815. The king, Vipula said sadly, was betrayed by his own people.

After an early breakfast the next morning, I boarded a bright blue train to Ella, a town southeast of Kandy. Travelling by train is one of my favourite ways to get to know a place: While allowing one to truly have a sense of moving from one place to another, it also creates a sense of community and shared experience with others aboard. From my second-class seat (about $22, again booked through Visit Sri Lanka Tours), I could enjoy the percussive clacking of the train as it wound through the intensely lush, hilly terrain, with row after row of perfectly manicured tea plants dotting every slope.

With tourists and locals hanging out of the doors and windows — some to get a good selfie, others to get some air — we pulled into Ella station. I made the short walk to the Sunnyside Holiday Bungalow, where I had booked a room for about $40 per night. The owners are kind and the property, with gardens and a big shaded porch, is beautiful. The one downside is that there seems to be a trash processing facility across the road, which can be slightly irksome when the wind blows the wrong way.

Ella’s downtown is geared to tourists and backpackers — think Western-style coffee shops, bars and souvenir stores — so I didn’t spend much time there. My first morning in Ella, I set out to find the Nine Arch Bridge, a gorgeous old colonial-era railway bridge that has, as you might expect, nine big arches. I was fortunate to arrive just as a big red and green engine with a few cars behind it came barrelling around the bend.

After a morning of walking around, it started to pour. I ducked into the restaurant at the 98 Acres Resort & Spa, which sits atop a hill and provides an awesome view of the surrounding countryside, even in the rain. I sipped a cappuccino (400 rupees) and lamented the weather.

But an hour or so later, I had my chance. The downpour had eased to a light smattering, and I set out to hike Little Adam’s Peak, a slightly rigorous but very doable trek to the south. It was a bit more difficult after the rain, but the trade-off is that I had it all to myself; I didn’t meet a soul on the way up.

Nor was there anyone at the summit. I approached a small shrine that had a covered golden Buddha statue and multicoloured prayer flags fluttering lightly, and admired the vista of low-lying clouds resting gently on what seemed like an endless series of rolling, green hills. Even through the rain, it was a spectacular sight.