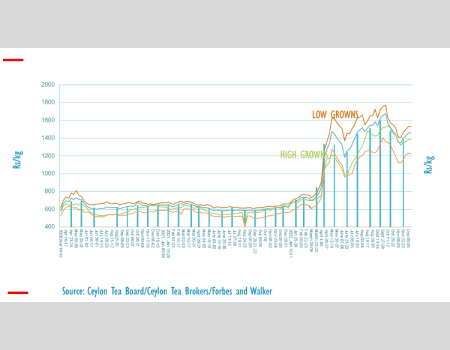 ECONOMYNEXT – Sri Lanka’s High Grown Teas fell around 100 rupees a kilogram at the auction on December 14th while some mid and low grown varieties moved up, with 4.5 million kilograms sold, brokers said.

“Overall quality of teas continued to be relatively uninteresting, consequently, the better Westerns BOP/BOPF’s, where quality was maintained, mostly sold around last week’s levels, whilst the others declined by 50 rupees per kg and more following quality,”

“Uda Pussellawas’ were mostly impacted following price declines of 100 rupees per kg and Uva BOP’s were barely maintained, whilst the corresponding BOPF’s declined up to 100 rupees per kg.”

Low Growns OP/OPA were up by 50 rupees, this week while OP 1 was up about 60 rupees, Ceylon Tea breakers said.

“Well-made FBOPs were firm, cleaner Below Best and cleaner Teas at the bottom too were sold on last levels. BOPs, in general, were firm.”

Large Leaf teas continued to sell well, whilst the others were irregular.

BOPF Best available were up to 50 rupees per kg lower, whilst the others were firm.

Well-made OP/OPA’s were firm or gained to 50 rupees per kg, whilst others together with the teas at the lower end were firm on last.

Well-made PEK/PEK1’s together with below best sorts were dearer 50-100 rupees per kg. Others at the lower end too were fully firm to dearer.