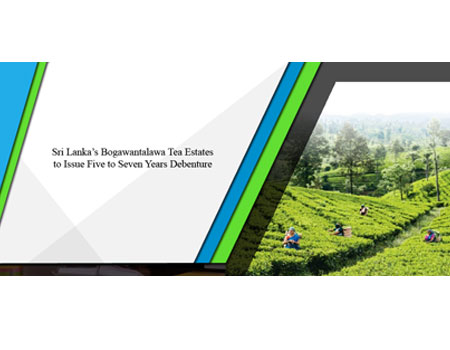 The local media has announced that the issue is scheduled to open on July 18, 2019.

Over the last five years, the total agriculture sector has contributed, on average a 7.32% to the Sri Lankan GDP, where the tea sector unfailingly emerged as a foremost contributor each year. Given such significance to the country’s economy, the sector participants have very little exposure to other funding mechanisms, other than perhaps the traditional forms, such as shareholder funding and bank loan financing, the state owned English daily has reported.

However, it was apparent that the non-linear cash generation of plantation specific companies, require tailor-made, innovative, hybrid solutions, unlike the finance sector companies, who enjoy constant, linear cash flow patterns, which make them easy targets to offer varying funding fusions, the report has further noted.

Therefore having conducted over a year of extensive research on the plantation sector, the Managers to the Issue, Areva Investments (Pvt) Ltd., has reportedly identified an accessible solution for these plantation companies, yet to be explored in Sri Lanka.

Accordingly, a long-term debenture issue with a more plantation specific structure, which aims to mirror the cash flow patterns of a plantation sector company has been considered and initially to be offered to BTE, a well established, matured player in the industry.