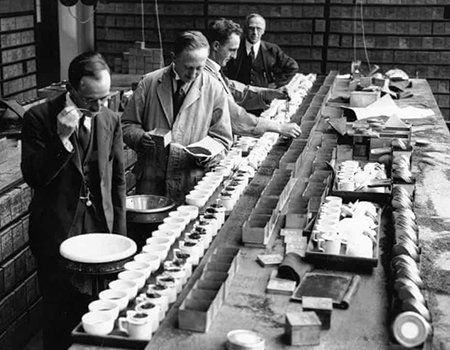 17 March 1924 ‘I was born with the gift of a rare and delicate palate. That is my principal tool’: a tea-taster at work

I work in a well-ventilated room which has a north light. My “bench” is a waist-high structure about thirty feet long, and on it there are a number of containers holding tea, of which there are about fifty kinds.

All day long I am testing tea, for each chest has to undergo an analytical scrutiny. We will take container No. 1. A few spoonfuls of this tea is put into a strainer, which is allowed to stand in a basin of hot water for ten minutes. I then taste the tea – not by drinking it, but by allowing the merest sip to touch my tongue. That is sufficient for me, but no food may be in my mouth at the time. I mark my observations on a label underneath the container.

And so I taste perhaps twenty other varieties of tea. The basins holding the poorest qualities I push back a few inches against a ledge, and I may thus find myself eventually with three outstanding basins, representing the best of that day’s teas. I will then judge between these three and decide which is the best. It is upon my judgement that the pricings take place.

But there are other tests. Some teas appear and taste very well when they are blank, but look rather mud coloured when milk is introduced, and cause the housewife to blame the “watery milk.” These teas need very careful blending.

I am now and again called upon to taste and test the tea of a big rival firm of tea dealers, although, so that my judgement may be unprejudiced, I am not informed of the fact until after my report is made. This tea is tested by me not so that my employers may introduce into their own wares the best essentials of a rival’s product but to guard themselves against deceit, for I get a number of packets of bad tea returned to me for analysis, so I must know someone is trying to foist a rival’s weak tea as the product of my employers.

Choosing the right leaf is but a minor part in grading and selling tea. The whole art of making a good tea is blending. Messrs — may sell good Ceylon tea, and so may Messrs —. But the latter, because of a better blend, have a greater market. Tea is blended in certain proportions in huge revolving drums which mix and at the same time cleanse of impurities. The drums contain a number of magnets, which withdraw from the tea any nails or wiring which may have fallen in during the opening of a chest.

My calling is not one which can be taught. Perhaps a youngster could have the art grafted upon him, but then only in rare cases. I was born with the gift of a rare and delicate palate. That is my principal tool.