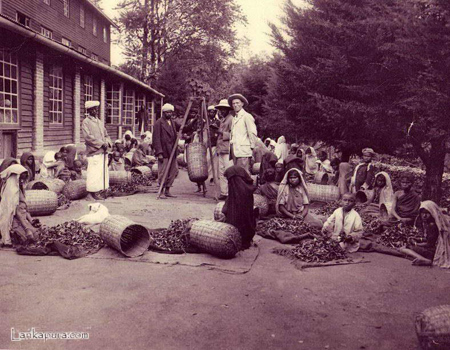 A major part of Ceylon's history in the first half of the 20th.Century before independence, was the struggle of Sinhalese nationalists to limit the immigration of plantation workers from India.

According W.T.Jayasinghe, former Sri Lankan Foreign and Defense Secretary, the coming of Indian labor to work in the island's coffee, rubber and tea plantations in mid-19th century, was epoch making. "No other event in the island's recent history has had such an impact on the polity of Sri Lanka," he says in his 2002 book: 'The Indo-Ceylon Problem: The Politics of Indian Immigrant Labor.'

When the British turned Ceylon into a major coffee and tea producer, they needed a high volume of labor. But that amount of labor was not available locally. Besides, as Jayasinghe notes, most British Governors and planters dubbed the indigenous Sinhalese as being "innately prone to laziness."

But Jayasinghe's argues that the British were unfair in their description of the Sinhalese. The Sinhalese peasant's status as an independent cultivator, and his self-esteem, prevented him from taking up wage labor, he points out. A.E. Goonesinghe, a leading trade unionist of the 1930s and 1940s, pointed out that no Sinhalese would work for the pittance that the Indian estate laborer was paid. Even in the 1930s, the wage was only half a Ceylonese Rupee per day. The British were also looking for a pliant and captive labor force, and the indigenous Sinhalese were not pliant, as the 1848 rebellion showed.

According to Jayasinghe, the first signs of a conflict with the indigenous Sinhalese appeared in 1848. A British parliamentary committee, which went into the 1848 Sinhalese rebellion, reported: 'The introduction of Malabar (Tamil) laborers has given the Kandyan much offense."

By the 1920s, Sinhalese nationalism had come to the fore in Ceylonese politics. Budding Sinhalese politicians started opposing the continuous import of Indian labor, though export of tea was the primary source of foreign exchange. In 1925, D.S. Senanayake of the Ceylon National Congress (CNC) alleged that Indian immigrant labor was being pampered while the indigenous Sinhalese were jobless. In 1929-30, crop failures in the Sinhalese hinterland led to increased tension between the Sinhalese and the Indian immigrants.

Nationalists pointed out that only 5% of the immigrant Indian labor was permanently settled in the island and that these were essentially birds of passage with no feeling for Ceylon.

However, the Donoughmore Commission of 1928, said that 40 to 50% of the estate population was permanently settled in the island. The Planters' Association put it even higher at 70 to 80%. The Planters Association also felt that in case there was no restriction on production, Ceylon would need 800,000 workers. There was therefore a potential shortage of Indian labor, it pointed out.

The E.Jackson Commission which went into the issue, reported that 400,000 might be considered to be permanently settled, and that this was half the maximum requirement of labor for the plantation sector. Jackson's conclusion was: "The time is certainly not yet in sight when immigration will have produced a permanently settled population of estate workers sufficient to supply all needs for labor on estates and when immigration for that purpose can accordingly cease."

Unlike the Sinhalese nationalists, Jackson did not consider Indian labor as a burden on Ceylon because they tended to come into the island when work was available, and leave if there was no work. He also underlined the fact that Indian immigrant labor contributed to Ceylon's prosperity. But Sinhalese nationalists trashed the Jackson report

Not Against Permanent Settlers

Jayasinghe's book makes one thing clear: This is that the Sinhalese nationalists were never against 'permanent settlers of Indian or any other foreign origin.' They were only against the transient population which ran into lakhs.

In 1931, the State Council laid down the criteria for voting rights, but these were not put into effect because of the opposition of the British rulers. According to the 1931 proposal, to qualify as a voter, an immigrant should have a Domicile of Origin or Choice, or have a Certificate of Permanent Settlement or have the required literacy and property qualifications.

It said that Indians already resident in Ceylon would be considered as having a Domicile of Origin in Ceylon if they were born in Ceylon and either of their parents were also born here. It was proposed that a child born outside Ceylon would have the same status if the mother had been born in Sri Lanka and the birth took place during the temporary absence of the mother.

"This took care of the fact that often, the wife of the estate laborer would go to her home in India for the first confinement," Jayasinghe notes.

About acquisition of a Domicile of Choice, it was proposed that an immigrant, after five years of residence, should make an application to a court of law which would be guided by English law in this respect.

However, the qualification for the obtaining a Certificate of Permanent Settlement was made more stringent. The period of residence for being eligible for this certificate was to be increased from five to seven years in the case of married persons and ten years in the case of others. And married persons should have their wives and children ordinarily resident with them in Ceylon. Continuous absence for more than one year would constitute a break in the required period of residence.

Importantly, there was to be no discrimination between those with a Domicile or a Permanent Settlement Certificate and the indigenous people.

In 1933, due to SWRD's efforts, the State Council passed a motion saying: "In view of the serious and increasing unemployment among Ceylonese workers, steps should be taken for the restriction and effective control of immigration into Ceylon of workers of other countries."

Jayasinghe quotes, H.W Amarasuriya, a planter politician, to say that the number of non-estate worker immigrants had grown from 39,579 in 1911 to 118,465 in 1935. Indians were a sizeable chunk among employees in the Public Works Department (PWD), Railways and the municipalities. Most of them were unskilled workers. Out of the 230,000 non-estate immigrants, 184,000 were laborers.

In 1934, the State Council unanimously passed a resolution that in employment, preference should be given to Ceylonese and that outsiders should be recruited only when qualified Ceylonese were not available. It was pointed out there were 30,000 registered unemployed in Colombo alone.

In 1939, a political storm arose when 800 non-Ceylonese daily wage labor in Colombo port and the Railways were sacked by the government. The Government of India which had an interest in the India immigrants demanded talks on the issue, even as it refused to have bilateral talks on trade. India also stopped all immigration to Ceylon, perhaps with the intention of hitting the money spinning plantation industry.

In 1939, Congress leader Jawaharlal Nehru came to Ceylon and said that the Ceylon government should have consulted India prior to the retrenchment. Nehru said that the Indian labor had contributed to the wealth of Ceylon which made John Kotelawala retort: " What is the net result of having that wealth produced? You have driven the people of this country, who occupied those lands, away from those lands."

In 1940, J.R. Jayewardene started a dialogue with the Indian National Congress on this issue. He submitted a memorandum to the INC at the latter's plenary in Ramgarh in 1940. This was perhaps the last bid before independence, to settle the matter through negotiations.