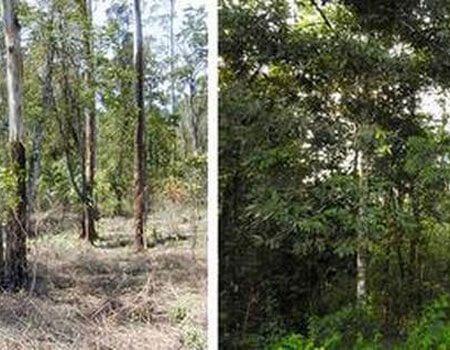 A two-decade long study carried out by ecologists from Nature Conservation Foundation and University of Columbia finds that active restoration can promote recovery of tropical rainforest fragments with seven to 15 years of effort.

The recovery included improvement in forest structure and composition as well as carbon storage. Further, the study finds that such a restoration effort would be more effective in fragmented forest patches. For example, those found in the middle of plantations, rather than in areas where the forest is contiguous but degraded. The results of the study are published in the open-access journal Ecosphere.

The study, which began in 2002, focused on rainforests fragments in Anamalai Hills, in the Western Ghats, and the ecological restoration involved clearing the chosen areas of invasive weeds and planting a diverse mix of native species. “We planted more than 150 native rainforest tree species overall. Depending on size of the plot, we planted between 27 and 82 native species carefully selected as appropriate for the site,” says T. R. Shankar Raman, from NCF and an author of the paper.

The group studied 25 pairs of plots within degraded forest fragments. In one of the pair of plots, they carried out active restoration which included first removing non-native weeds and then planting saplings belonging to a variety of native tree species.

The other plot was left to regenerate naturally. Finally, the results of the effort on the two sets of plots were compared with 17 benchmark areas that were relatively free of human disturbance in a few decades.

“A key challenge we faced was in identifying suitable pairs of sites such that actively restored and naturally regenerating plots were similar to each other in all respects (for instance, slope, topography, past disturbance), except for that one was restored and the other was not,” says Anand Osuri from The Earth Institute, Columbia University, and first author of the paper, in an email to The Hindu. “We achieved this by conducting detailed site surveys before the main study, comparing old photographs of the sites pre-restoration, and through discussions with our field staff who were involved in the restoration efforts.”

The team found that the actively restored areas improved in comparison with the passively restored ones in a way that matched the benchmarks to a good percentage. From seven to 15 years after restoration, these degraded forests recovered significantly in terms of numbers of trees, 49% in the number of tree species and 47% in the amount of carbon stored for a given area, compared to degraded forests left to recover naturally, according to figures presented in the paper.

“First, don’t assume that planting trees is the best way to restore an ecosystem. Trees should not be planted in ecosystems such as grasslands, deserts, or wetlands that did not have any forests to begin with.” says Divya Mudappa, another author of the paper and from NCF.

According to her, the best way to go about ecological restoration would be to identify critical areas that would benefit from restoration effort — this would include sites far away from larger, contiguous tracts of forests or those that would be critical as animal or plant movement corridors. “Ecological restoration should use a diverse set of local, native species. We need to plan long-term as most of the native plants can be slow-growing and sometimes even difficult to grow,” Dr. Mudappa explains.

With regard to degraded forests that are not isolated, Dr. Shankar Raman says, “If degraded forests adjoin or are near larger tracts of relatively intact forests, it may be better to just protect them and leave them to regenerate naturally as that would be cost-effective.”

Some of the fragments that the team studied were located within tea and coffee plantations. “We were fortunate that tea and coffee plantation companies extended their support. They engaged in partnerships with us, recognised these forest patches as ‘biodiversity plots’ within their estates and provided in-kind support such as labour and space for nursery,” says Dr. Shankar Raman.