Home>Publications & Articles>Articles>Media Articles>Save the brew: Tourism will help Darjeeling, but the world-renowned tea shouldn't be flushed down in the process

Save the brew: Tourism will help Darjeeling, but the world-renowned tea shouldn't be flushed down in the process 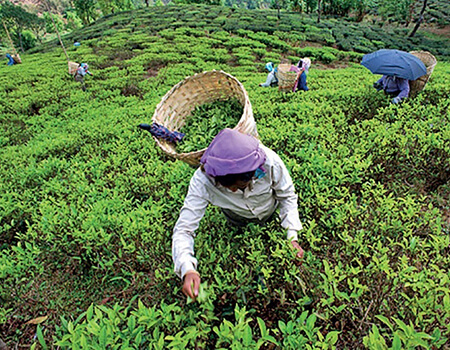 The Covid-19 lockdown hit Darjeeling at one of the worst possible times. The first lockdown on March 24 came as tea plantations were just starting to pick the first flush, the earliest harvest of leaves. This has a fresh, floral and only slightly astringent flavour, which is much prized in the international markets that value orthodox Darjeeling tea. The first flush accounts for around 40% of the annual revenue of Darjeeling tea.

There was a good case to continue picking. Plantations are small worlds in themselves, with workers staying on them. It should have been easy to argue that they could be well-guarded from the virus, with regulated entry and sanitised supplies. And, at that stage, there were as yet few cases in the Northeast. But Darjeeling has little clout now, caught in an endless political football game between West Bengal and the Centre. And the slow decline of the tea industry seems to have left it apathetic and unable to lobby effectively.

Darjeeling shut down and most of the first flush was lost. It has opened again to pick the summer flush, the most prized harvest and the one that best defines the classical Darjeeling style with an elusive, almost winey taste. Except that now, returning migrants have brought the virus to the hills and cases are rising. At least 29 people have died in Siliguri, forcing the Gorkhaland Territorial Administration to reverse its earlier decision to open up for tourism, and to reimpose a lockdown.

But just the fact that tourism was considered, and may be allowed again at some point, while no attempt was made to save the first flush, shows where Darjeeling’s interests increasingly lie. Last year, the state government allowed 15% of land in tea gardens to be used for tourism, a decision that seems to be driven by some politically wellconnected plantation owners deciding that their future was probably more in tourism and not primarily tea. It is not impossible to imagine a future where tea gardens become just the backdrop to tourism, especially in a post-Covid era.

This matters because orthodox (full leaf ) Darjeeling tea is one internationally acclaimed high-quality food product made in India. And at a time when we are extolling self-reliance and domestic production, this should really count. For the nationalistic minded, an added benefit is that this is one product India took from China and made into something very special of our own. Assam has naturally occurring tea. But it was after seeing this, and realising tea could grow there, that the British brought Chinese plants which developed into Darjeeling tea.

The problem is that Indians have never really appreciated Darjeeling tea, partly because it was never made for them. The focus for the best Darjeeling was always customers in places like the UK, Germany and Japan, while Indians were sold CTC (cut, tear, curl), the granular looking, mass-produced style that gives a strong, but hardly subtle, cup of tea. It didn’t help that orthodox Darjeeling must be appreciated plain, while tea in India is really drunk as a flavouring for milk. CTC is ideal for chai, but it would be a waste to make orthodox tea that way.

The good news is that our extended lockdown is an excellent time to discover the value of orthodox Darjeeling, especially now that the monsoon has set in. Tea is an ideal commodity to buy online, light and long lasting, so worth buying in bulk. Online retailers, both general and tea specialists, generally have a good variety. The plantations that are serious about tea now offer the chance to buy directly, and at a good price. (And at least one courier is still operating from Darjeeling, so delivery will happen).

Orthodox tea prices can vary a lot depending on type and garden (though some of the best-known names are clearly no longer worth it). On an average, a decent orthodox tea costs about five times the regular CTC. Even without considering the huge difference in quality, orthodox tea is better in value than it seems because the same leaves can be reused, whereas CTC is for one-time use only. A quick first steeping gives the essential character of the tea, but a longer second steeping gives a more rounded taste. Orthodox leaves can even be used three times, especially if a third steeping is combined with extra flavourings. Herbs like mint, lemongrass and tulsi are obvious additions (but also think of variants like spearmint or lemon basil, which are easy to grow at home). Spices are another, with less common ones like star anise and mace (javitri) being interesting alternatives to the usual cardamom. An oddball approach is to use grains, like with Japanese genmaicha which adds popped rice for a wonderfully mellow, toasty taste. You simply need to dry roast rice or any other grain in a pan till it starts popping and then add that to the brewing tea.

There is also more to orthodox tea than first and second flush. While these are the best-known Darjeeling styles, there has always been the autumn flush, plucked at the end of the year and wonderfully mellow, but also cheaper because foreign buyers, who place their orders in time to get Christmas shipments, have always ignored it. Green tea tends to be consumed more for its health benefits, and accordingly many plantations simply supplied badly made teas that were either harsh or tasted of nothing. But some people who are truly committed to tea, like Rishi Saria at Gopaldhara, are now making green teas with the subtlety of Chinese styles. They are also making good oolongs, which are semi-fermented teas, halfway between unfermented greens and fully fermented blacks. Saria recently told me they have got a roaster to try making teas like the very smoky lapsang souchong, though the virus has come in the way of their plans for this year.

Darjeeling tea has still so much to offer, and it is so easily accessible. It would be a tragedy to see more plantations lost to the combined effect of viruses and tourism.