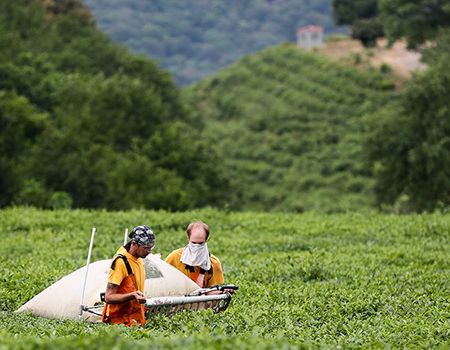 SOCHI, April 9. / TASS /. The leaf-collecting areas of the tea plantations of the Matsesta tea company in Sochi are planned to be almost doubled in a few years - up to 170 hectares, the

area will be increased due to the reconstructed 80 hectares of land, the press secretary of the company Irina Novikova told TASS on Friday.

"Over the past 4 years, about 80 hectares of tea plantations have been reconstructed. In a few years, these areas will be put into agricultural circulation and the volume of gross harvest will increase," Novikova said, adding that this work could take about five years. The new space has already been cleared, and rejuvenated tea is starting to grow there. The tea will be ready for picking in three years. In another two years, it will be possible to start mechanical leaf picking.

Last year, the Matsesta Tea Factory installed new modern equipment in the tea leaf processing workshop, which made it possible to fully automate the process of cleaning tea semi-finished products. In the future, the company intends to modernize small-scale mechanization equipment for collecting tea leaves. "Since our industry is unique, such equipment is not produced in Russia, so we buy for foreign currency," the company explained. As the regional Ministry of Agriculture told TASS due to the general growth in the area of tea plantations in 2020, almost 350 tonnes of tea were harvested, which was 116% compared to 2019. Despite the fact that last year there were spring frosts and summer drought. The press service clarified that in 2021, 7.2 mln rubles are provided for support in the development of tea growing.

The Matsesta Chai company produces more than 100 types of tea products, its plantations are located in the Matsesta Valley among the mountain ranges of the Caucasian ridge. The company is engaged in the revival of plantations that fell into disrepair in the 1990s. The enterprise has a full production cycle - from growing and processing tea leaves to producing finished products. The Matsesta Tea Factory is the only Russian tea exporter, in 2020 it made the first delivery to Serbia. Also, products are sent to private stores in Japan and the UK. The company has plans to sign export agreements with a number of other countries in the near future.