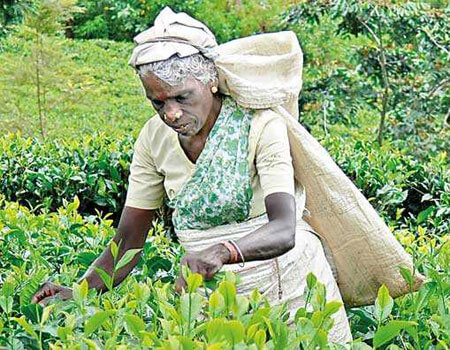 As demand for further increases in the plantation workers wage continues, Regional Plantation Companies (RPCs) have called for a new wage structure focusing on a revenue share model that could have sweeping productivity-focused reforms in the entire industry.

“When we signed the collective agreement on the new wages we informed all stakeholders including the Plantation Minister and the Labour Minister who were both present at the meeting that we want to go for a new wage model. We will begin discussing the matter in a couple of months,” Planters’ Association Secretary General Lalith Obeyesekere told Daily FT.

The recent wage negotiations, which dragged on for over three months, resulted in a 40% increase in the basic wage to Rs. 700. However the wage model underwent a change, with incentives given for attendance and productivity being removed. While two out of three trade unions signed the agreement, the third signatory to the collective agreement did not sign protesting the removal of the incentives.

The over kilo rate was also increased to Rs. 40 on every kilo harvested above the estate norm from Rs. 28.75. However the Planters Association (PA) has maintained that further increases in the wage would not be sustainable noting that the wage model should be revised.

“The PA reiterates its support for delivering increased earnings to workers in a manner that is financially sustainable. With the previous collective agreement we had express commitments made from stakeholders to support a transition towards a revenue share model and we remain deeply concerned about the regression away from such a model in this latest agreement,” a statement issued by the PA said.

Noting the limitations imposed by the current model on workers capacity to earn due to its “traditional wage structure that is rooted deeply in the colonial past of this industry” the PA called for a shift towards a revenue share model.

“In order to ensure the long-term sustainability of the industry, he therefore reiterated the need for sweeping productivity-focused reforms across the entire industry” the statement issued by the PA said.

Trade unions which are signatories to the current collective agreement and other trade unions such as the Up Country People’s Front and Tamil Progressive Alliance have also called for reforms in the plantation wage sector.

“Every two years we have to engage in negotiations and strikes. It takes months to reach settlement. It is time to rethink the model and we have discussed this situation with some of the plantation companies already,” Ceylon Workers Congress Treasurer M. Ramesh told Daily FT.

Among different options, the out-grower model where the workers are allocated small plots of land to grow their own tea to sell to the factories is being favoured by trade unions.

“Then they won’t have a problem with productivity or daily wages, the workers can grow and will be paid based on output,” Ramesh said.

“We are planning to discuss this in the future.”

Minister of Plantation Industries, Navin Dissanayake also expressed the need to reform the sector at a meeting last week noting that RPCs will have to consider options like out-grower model going forward.

The PA noted that in RPC estates where a revenue share model has been successfully implemented, workers have recorded monthly earnings between Rs. 50,000 to Rs. 80,000.

However the PA noted that the current agreement is already in force and does not require any further action from any other stakeholders in order to proceed with the new wage among the RPC sector. Wages have already been paid to workers based on the new agreement.

At present, Sri Lanka remains the highest in the world in terms of its Cost of Production (COP) on tea which has already exceeded the RPC’s revenue generating ability. As at November 2018, the COP is Rs. 630 per kg as compared with an average sales price of Rs. 558 per kg. Notably, 70% of Sri Lanka’s COP is comprised solely of the cost of labour.