Replacing Coffee With Green Tea Affects Your Body In These 6 Ways, Experts Say 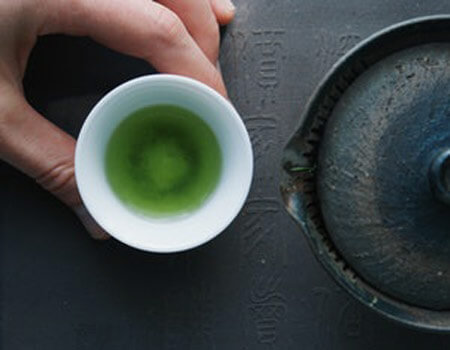 Coffee is one of America's favorite beverages — a survey published in 2018 found that 64% of the nation drinks at least one cup every day — and a hot steaming espresso in the morning can be one of life's greatest joys. However, coffee isn't your only choice for morning caffeine. Green teas, which are created by treating fresh tea leaves with steaming or gentle heating, have less caffeine in them than black teas or coffee, but enough to give you a boost. They also have a host of other health benefits. If you're looking for a way to perk up in the morning but are increasingly dissatisfied with coffee, switching from coffee to green tea might be a great option.

There isn't one uniform type of green tea; there are a lot of varieties, including those with added flavors like flowers or herbs. Smoky, roasted green teas like hojicha taste very different from steamed teas like sencha because of their method of production — and leaf teas taste much better than anything you get in a teabag. (Sorry, but it's true.) However, all green teas have particular ingredients and compounds that can affect your health. If you're interested in switching over from coffee to green tea in the mornings for your dose of caffeine, here's what might happen.

1. You'll Be Ingesting Less Caffeine — If You Don't Drink Matcha

The amount of caffeine you ingest from green tea depends on a lot of things: the variety you choose, whether it involves leaf tips or buds (which contain more caffeine), and whether it's powdered or uses whole leaves. Matcha, the popular powdered tea, has a much higher caffeine content than leaf green teas, because a single cup of it contains many more ground-up leaves than a cup of leaf tea. If you drink matcha in the mornings rather than coffee, you'll be ingesting more caffeine than you once did. If, however, you stick to the non-powdered varieties of green tea, your caffeine intake will drop, which can cause withdrawal symptoms.

"If you drink a lot of coffee, you may get headaches when you try to cut back," Paz says. Switching from coffee to green tea may not cause all the symptoms of caffeine withdrawal, because green tea still contains approximately 20 to 30 milligrams of caffeine per cup. If you're switching from very strong double espressos to one cup of green tea, though, you may experience headaches, irritability, difficulty concentrating, and lack of focus for a short time until your body adjusts.

Cutting back on caffeine levels by drinking green tea may help lower anxiety and improve sleep, particularly if you happen to be sensitive to caffeine. "The higher caffeine content of coffee may negatively impact people who are sensitive to caffeine," Ramzi Yacoub, the chief pharmacy officer at SingleCare, a prescriptions service, tells Bustle. "They may experience anxiety, insomnia, and heart effects like increased heart rate or blood pressure."

If this sounds familiar, it might be worth lowering your caffeine levels by switching over to green tea. The change could help decrease your body's anxiety response and reduce symptoms of caffeine over-stimulation — while still giving you enough of a caffeine boost to get going in the morning.

Green tea also contains various compounds and ingredients that can help our immune systems, fight off infection, and lower our risk of diseases. "Another benefit of tea is the amount of antioxidants it contains," Paz tells Bustle. "While coffee also has its fair share, tea typically has a higher concentration." Green tea in particular has a variety of antioxidants that have been shown to have health-boosting properties, and has a higher antioxidant content than coffee.

One of the most studied antioxidants in green tea are the catechins, a compound found abundantly in tea, cocoa, and berries. Catechins have been shown in studies to have antimicrobial properties, and a review of science published in 2010 found that they've also been shown to lower cardiovascular disease risk, help prevent degenerative diseases, and assist with kidney and liver function. Catechins have also been implicated as a possible way to lower the risk of breast and other cancers, but as with a lot of dietary science, the possibility that green tea is a cancer-buster is hugely individual. Just switching from coffee to green tea won't automatically change your cancer risk.

4. You May Reduce Inflammation

Inflammation, which is the immune system's response to threats and stress, is a key factor in keeping you healthy, but it's also a component in a lot of health conditions, particularly when it won't go away. Persistent low-grade inflammation has been linked to heart conditions, rheumatoid arthritis, asthma, degenerative illnesses and various cancers, according to research published in 2018.

5. It May Be Better For Your Oral Health

Switching from coffee to green tea may be an unexpected boost for your mouth. Coffee can heighten your risk for the gum infection periodontitis, according to a large study published in PLOS One in 2018, and it also increases your risk of tooth staining. Green tea, however, seems to have benefits. A study published in Oral Chemistry in 2016 found that its anti-microbial properties might reduce the risk of certain harmful bacteria building up in the mouth over time.

Switching over from coffee to green tea may also help the bacterial population in your mouth in general. We all have an oral microbiome; it's a collection of bacteria and other living things in our mouths that can help or hinder its health. A study published in Cancer Epidemiology, Biomarkers & Prevention in 2018 found that tea drinkers had a more varied microbiome in their mouths than coffee drinkers, complete with higher amounts of helpful bacteria. That could help prevent infections and general oral issues. Tea might change your mouth for the better.

Caffeine can have serious benefits, even in the small amounts you get from green tea. Scaling your caffeine intake down rather than going cold turkey means that you can still reap some of those benefits. "Caffeine is an effective stimulant to help improve physical performance and mental alertness," Yacoub tells Bustle. "In some studies, caffeine has also been shown to reduce type two diabetes." Harvard Medical School notes that in small doses caffeine has also been shown to help protect against neurodegenerative diseases like Alzheimer's. A little caffeine a day may prove to be helpful to your health in the long run.

If you're thinking of making the move from coffee to green tea, research indicates that you may be looking at improved health outcomes in the future. It's definitely worth considering swapping your espresso for a cup of sencha. Just don't pour boiling water over green tea leaves; it scorches them. Take it from a devotee.