Productivity of the Plantation Sector 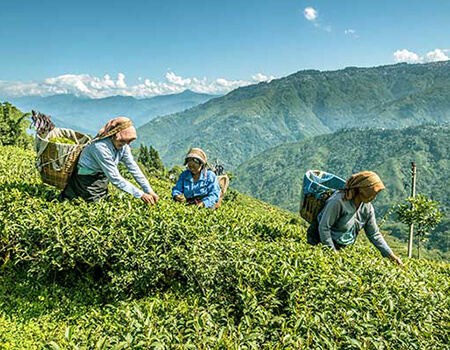 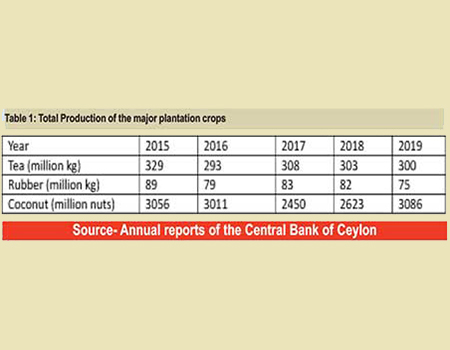 According to J. A. A. S. Ranasinghe, Productivity Specialist and Management Consultant, in his article titled ” Wage increase makes mockery of collective bargaining” in The Island of 9 March, Regional Plantation Companies (RPCs) would continue to incur heavy losses if the proposed daily minimum wage of Rs. 1,000/= is paid across the board.

The plantation sector, which includes mainly tea, rubber, and coconut, plays a very important role in the economy of the country. The extent under plantation crops is around 870 ,000 ha. Nearly 30% of the labour force is involved in this sector, which earns about 20% of export earnings. . Since the implementation of the Land Reform Law in 1972, the large estates of tea, rubber and coconut were nationalized and their management was given over to the State Plantations Corporation (SPC) and the Janatha Estates Development Board (JEDB). In the year 1992, a large number of these estates, nearly 300, were given on lease to Regional Plantation Companies (RPCs).

It is likely that the 20 RPCs, currently operating in the country, supervising 285 estates under them are making a desperate attempt to contain the high cost of production (Rs/kg) and there will be an inevitable impact, detrimental to the well-being of the industry, in the face of the enhanced wages approved by the Wages Board.

The average tea yields are considerably lower than the potential yields. It has been reported that some of the cultivars, developed by the Tea Research Institute of Sri Lanka, had been yielding around 8,000 kg/ha in South India under commercial conditions.. However, the average tea yield in Sri Lanka is much lower. Productivity of tea lands indicated by kg/ha/year has fluctuated around 1,600. In fact it has decreased from 1,736 kg/ha in 2014 to 1,602 kg/ha 2017 possibly due to undesirable weather, soil erosion leading to infertile soils, pests and diseases, etc. A study of the agricultural profile of the Corporate Tea sector was carried out a few years. According to the findings of this study, the productivity of tea estates, indicated by kg/ha/year, were less than 1500 in 183 estates. . It is necessary that RPCs implement an effective programme to increase the productivity of those estates giving low yields after a detail study to determine the reasons for the low yields so that appropriate action could be taken. Low per hectare yields could be due to a number of factors such age of the crop, water shortage, degraded soil, etc.

The productivity of the coconut sector indicated by nuts/ha/year does not show any substantial improvement. It had been fluctuating around 7500 nuts/ha. In fact, during the period 2015 to 2017 the average yield has decreased from 7,765 to 6,769. There appears to be no study of the agricultural profile of the coconut sector as done for the tea sector. It is necessary that RPCs implement an effective programme to increase the productivity of those estates giving low coconut yields after a detail study to determine the reasons for the low yields. Results of such a study will be of use in taking appropriate action.

The proposed studies to determine what factors cause the yields of tea, rubber and coconut to decline could be completed in a short time if the RPCs take an concerted effort to make use of the human and other resources available to them.

A number of factors can be attributed to decrease in the productivity of the plantation sector. Among these are Land degradation, and old age of crops

The present yield crisis in the plantation sector can be attributed to many factors among which is soil degradation mainly due to soil erosion, soil compaction, and nutrition depletion, loss of bio-diversity, etc. In view of the importance of this issue, the Ministry of Environment, in 2005, established an expert committee on Land Degradation. This committee comprised a number of experts in the field of land management and its main role was to advice the Ministry of Environment, on issues related to controlling land degradation. This committee has not met since Feb. 2013.

The participants of the first national symposium on Land Degradation held a few years ago, who were representing many land-related institutions in the country, were of the view that urgent action, such as implementation of proper land use planning and soil conservation and environment act etc. need to be taken by the relevant organizations to control land degradation. In view of these critical issues it is necessary that the authorities concerned, take necessary action to prevent further soil degradation.

There are many ministries, departments and other institutions which are expected to take appropriate measures to control land degradation. During the last few years a large number of seminars, and workshops have been held on this topic. In spite of all these, land degradation continues to take place, evident by the common occurrence of landslides, depleted top soil, siltation of tanks and reservoirs, decline in crop yields, etc. The Ministry of Environment (ME) needs to activate the already established Committee on Land Degradation which would make appropriate recommendations to reduce land degradation to be implemented by ME and other organizations. A land use policy has been formulated but is not effectively implemented to reduce land degradation which has serious repercussions on the productivity. The Land use policy need to be implemented as an integrated programme in increasing the productivity of the planation sector.

Inability to take relevant action to increase productivity of the plantation sector will exacerbate the financial and social problems we are facing.In view of these critical issues faced by the Plantation Sector it is necessary that the relevant authorities, lead by the Ministry of Plantation Industries, develop a holistic national plan to resurrect the planation industry . It is also important that the respective ministers get the service of scientists in managing the scientific organizations under them..

A Data base on the planation sector

A complete and updated data base on the corporate plantation sector would be extremely useful in our endeavours to increase the productivity of this sector. Such a data base will be of much use in planning, making policy decisions and management practices such as replanting, diversification and identify the development needs of the planation sector, and would enable the relevant authorities to channel investments to increase productivity of the sector.