In the Sri Lankan hills, preschool teachers run classes to prepare women for the practical and emotional realities of taking on migrant work in a foreign country and teach husbands how to do the job of raising the children. 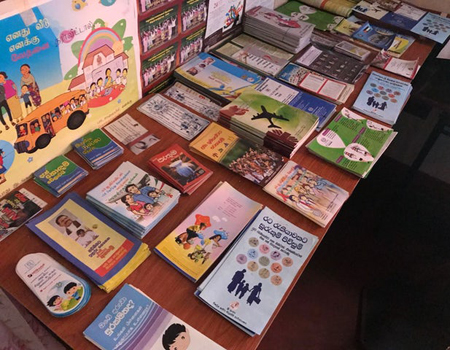 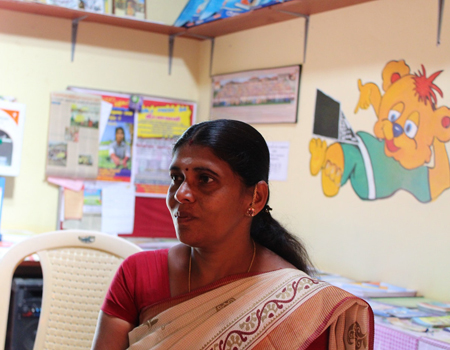 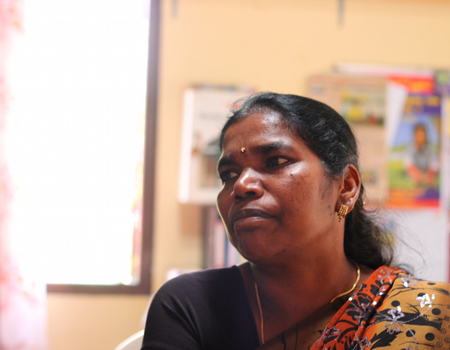 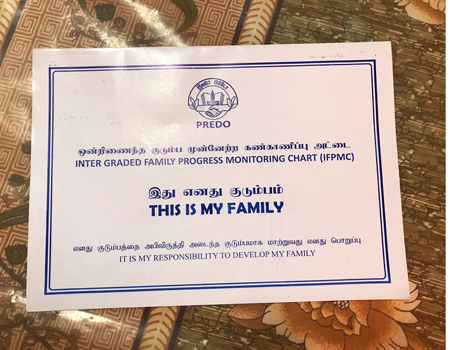 HATTON, SRI LANKA – By day, S. Sudha teaches 25 children counting, coloring and spelling in a bright classroom in the town of Hatton, nestled in the hills of Sri Lanka’s tea country. In the evening, she teaches their parents about things like finance, nutrition and children’s mental health.

The same way Sudha is preparing the children for their future careers, she helps parents adapt to the realities of migration. She is one of more than 200 preschool teachers who spend their evenings educating families in their community about leaving home to work in a foreign country, arming them with the skills and information they need before they leave and supporting them and their families while they are away.

Every year, tens of thousands of women migrate from Sri Lanka primarily to the Middle East for jobs as domestic workers. In 2016, according to the most recent data available from Sri Lanka’s Bureau of Foreign Employment, 65,127 women migrated from Sri Lanka to work as housemaids, a dip from the 73,226 women who did the same in 2015.

When women migrate to make money for their families, their husbands or parents often have to take on the role of primary caregiver. And whether the women leave for two or 10 years, those long absences put a strain on their relationships with their children, affecting the well-being of both mother and child.

To help local families cope, in 2010, the nonprofit organization Plantation Rural Education Development Organization (PREDO) started bringing in preschool teachers to prepare families where one parent is leaving the country for work. Mothers learn what to expect when they get to their new roles in a foreign country, and fathers are taught the basics of childcare. Today, PREDO runs these classes in 230 preschools across the region, reaching about 4,000 families.

“MANY WOMEN GOING OVERSEAS FOR DOMESTIC WORK INITIALLY PLAN TO BE AWAY FROM THEIR FAMILIES FOR JUST TWO YEARS WITH THE GOAL OF IMPROVING FAMILY PROSPERITY. VERY FEW, EITHER MALE OR FEMALE MIGRANT WORKERS, ACTUALLY MANAGE TO SUBSTANTIALLY SAVE MONEY WITHIN THEIR FIRST TWO-YEAR CONTRACT.”

“We decided the best thing is to educate the mothers on how to make the decision [to migrate] by showing the pros and cons of migration,” Michael Joachim, PREDO cofounder and director, says. “And to educate the father, because if the mother goes, the father… should take on all the responsibilities of the mother and father.”

A Long Time Away From Home

For some families, migration paves the way to better living conditions, better schools and the chance to own their own homes. But many others return having made little money, ending up back where they started or sometimes worse off.

“Many women going overseas for domestic work initially plan to be away from their families for just two years with the goal of improving family prosperity. Very few, either male or female migrant workers, actually manage to substantially save money within their first two-year contract,” Giuseppe Crocetti, Sri Lanka chief of mission for the International Organization for Migration, says.

Often times, most of the money they make in those first few years goes into paying costs they accrued before they even left. As a result, many end up extending their contracts, staying away from home for 10 years or more.

That’s what happened to Joseph Pushpamary, 45, who left Sri Lanka for Jordan in 2005, in hopes of earning enough as a domestic worker to build a house and educate her children. Pushpamary says her husband convinced her to go abroad for work, telling her, “If you go abroad for employment, we can solve our financial problems.”

But within months of Pushpamary’s move, her husband had left her and married another woman, leaving their children with relatives. She says her husband squandered the money she sent home for the house and schooling – their children never finished high school.

After about a decade working in Jordan and then Saudi Arabia, on a series of two-year contracts, Pushpamary returned to Sri Lanka in the summer of 2017. Since then, the preschool teachers at PREDO have advised her on how to get her finances back on track and helped her find a job at a tea plantation.

Teachers like Sudha help women set up bank accounts before they leave the country, visit families in their homes after the mothers have migrated, help women abroad set up phone calls with their children and check in regularly with fathers and grandparents about their responsibilities.

One of the tools they use is a chart that they give to carers to help them track the parental division of labor: things like buying nutritious food, paying monthly bills and attending meetings at school.

Every month, the teachers hold meetings with fathers to consult the charts and discuss how they are faring in their childcare duties. If a father isn’t checking off the appropriate boxes on the chart each month, the teacher spends more time advising him.

As she prepares each lesson for the families she teaches, Sudha first tests it on her own family. When she’s satisfied, she takes the lesson to the community.

“As this society’s awareness and knowledge is very lacking and poor, it’s my interest to serve society,” she says.

Someone to Turn To

In addition to safety and basic needs, the preschool teachers also help families navigate the emotional impact of a mother’s absence.

“The income earned by mothers abroad can ensure their children have access to a better education. However, there are reports of children struggling to form a close bond with their mother, or even older children resenting their mothers for being away for much of their adolescence,” says Max Tunon, labor migration specialist for South Asia at the International Labor Organization.

So teachers like Jayanthi and Sudha keep their doors open for the children of the families they help, even older children looking for advice. They also update mothers abroad on how things are going back home and coach fathers on how to talk to their daughters about issues they would normally share with their mothers.

With the dozens of families she advises, Sudha’s relationships can last years as mothers extend their time abroad.

She has watched these children grow up, and some have been turning to her for help on everything from what classes to take to disagreements with their parents.

“Now I feel like they’re my own children,” she says.