Regional Plantation Companies (RPCs) last week blamed the government’s ad-hoc policy decision for low productivity of their plantations, which is adding to the financial woes of the already reeling plantation companies. 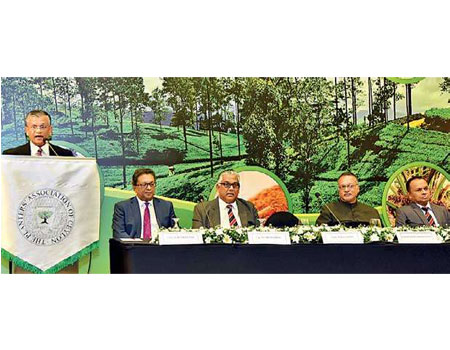 Addressing the 164th Annual General Meeting of the Planters’ Association of Ceylon (PA) last Friday in Colombo, its Chairman Sunil Poholiyadde identified the acquisition of high-yielding and profitable tea and rubber plantations by the government as a main reason for the low productivity of RPCs.

“Most lands lost in the plantation sector are the most high-yielding and profitable ones with easy access. We are aware that land is required for housing etc. But acquisition priority should be for bare land or lands with low productivity.

“I had an opportunity to attend a meeting at the Presidential Secretariat last week to discuss a strategic planning process for the tea industry. So many ideas came up as to whether Sri Lanka should be focused either on quantity or quality and there were many diverse views. Representing RPCs, I pointed out that it is mainly the fast diminishing extents due to the acquisitions of highly productive tea lands that are seriously affecting the industry,” Poholiyadde said.

He revealed that an estate of 500 hectares was taken over by the government for an industrial project. However, he pointed out that though it was taken over several months ago, the land is yet to be developed.

“Unfortunately, many months have lapsed since this land was taken over, but it has still not been put to use for the purpose indicated for the acquisition, while the benefit is being enjoyed by another organisation,” he said.

Poholiyadde further revealed that the government has already issued notices to RPCs to stating the need for several other plantation lands for industrial, housing and urbanisation development projects.

“We have a serious issue in protecting the current high yielding tea lands. All acquisitions are focused on these areas especially for housing, urbanisation etc., which has a drastic impact on our production.”

Poholiyadde also said that the ban on felling of trees over the 5000 feet elevation is also adversely impacting the tea plantation productivity while costs keep increasing.

“We are unable to even remove the excessive shade trees affecting the production. Many companies have invested in planting timber for fuel wood, but currently with the ban on felling trees at over 5000 feet elevation, the companies are unable to harvest the fuel wood available and also have to transport them from the low country areas at a considerable cost.

Poholiyadde asserted that it’s crucial to have a crop balance, which was why provisions were made when handing over RPCs to private sector in 1990’s, giving the companies a free hand concerning diversification.

However, he lamented the government’s ad-hoc decisions on oil palm cultivation, which have made RPCs to suffer a Rs.450 million loss.

“The plan was to expand oil palm cultivation to 20,000 hectares, already approved by the government. We have now reached 11,000 hectares. Unfortunately there are many obstacles in proceeding with the cultivation of this crop. Since of late, all seed importation for oil palm is done through the Coconut Research Institute.

“Having imported the seeds following the government procedure and raising the planting material, we are in a totally unfortunate situation where the companies have seedlings worth Rs.450 million in the nurseries but are unable to plant them out in the field due to a government-imposed ban,” he elaborated.

Speaking to Mirror Business, Poholiyadde said yesterday that neither PA nor the Palm Oil Industry Association was invited for the recent National Economic Council (NEC) meeting where the President had reportedly taken a decision to ban oil palm cultivation in Sri Lanka.

Hence, the decision, he said, which is yet to be officially announced, was taken without consulting the stakeholders.

“We were waiting for an invitation to attend the NEC meeting which we didn’t get. However, we had a meeting with one of the President’s advisors prior to the NEC meeting,” he said.

He questioned as to who would be responsible for the loss in the end, while acknowledging that the industry remains optimistic that the Plantation Industries Ministry’s effort to implement the programme of planting up to 20,000 hectares would be successful.

“We are aware of the steps taken by the ministry and its officials to implement the programme of planting up to 20,000 hectares. And are hopeful that they would be successful and would be of national interest besides being of a great financial relief to the companies concerned,” he said.

Speaking about the earlier ad-hoc decision of the government to ban on glyphosate, where Sri Lankan teas were almost kicked out of the Japanese market, Poholiyadde noted that the planters remain hopeful the first consignment of glyphosate would come into the country for the first time after lifting the ban, in mid-October.

He noted that the traces of the MCPA chemical, which is not recognised in Japan, still can be found on tea, which is a major concern for tea exports to Japan.