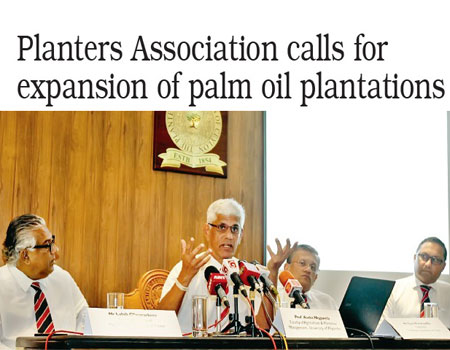 To diversify the agricultural industry in times of changing climate and fluctuations in commodity markets, the Planters Association of Ceylon is calling for the expansion of palm oil plantations from the existing 11,000 hectares (ha) up to 20,000 ha.

The Association convened a Media conference at the Association premises in Colombo yesterday (24), Chairman of the Association, Sunil Poholiyadde said the expansion was approved by the previous regime and various other authorities, with the seeds imported and Rs 400 million worth of palms grown in nurseries, however, whenever we attempted to plant these crops, there has been agitation.

The Association was unclear as to who was really behind this disruption, but pointed to policymakers, Non Governmental Organisations and the public.

They insist that mixing crops through this diversification was needed to sustain our agricultural sector, and that palm oil would be a good addition as we could reduce the reliance on oil imports which is currently valued at Rs 30 billion.

Prof. Asoka Nugamela of the Faculty of Agriculture and Plantation Management at the University of Wayamba explained that although palm oil plantations was a controversial issue, these issues are not relevant to Sri Lanka, insisting that there are fewer environmental impacts than one would believe due to the specific circumstances of these plantations.

This includes how cultivation will be limited to 20,000 ha of exclusively arable land, he noted.

While the import of any more seeds has not been approved, existing oil palms in nurseries have now begun to flower and are overgrown and in urgent need of being cultivated, which requires an immediate decision.

Thus the Association hopes to sway the public in favour of these plantations, in an attempt to dissuade protests and obstruction of its cultivation.