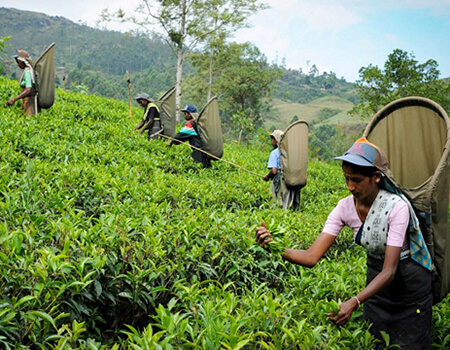 There was a time when Sri Lanka took pride in its plantation sector, and the massive foreign revenue it generated was essential to the country’s economy. Almost every citizen knew what Sri Lanka’s three main export crops were.

Sri Lankan tea, among other export crops, is one of the staple export crops, and Sri Lanka has in fact become famous for its tea due to its quality. However, the world changes, times change, and so does the economy. In recent times Sri Lanka’s tea industry has faced a multitude of issues due to various reasons, and the plantation sector workers’ wage issues take a special place among them.

Despite the hard work put in by Sri Lanka’s plantation sector workers, they are generally seen as one of the lowest paid sectors of the country’s workforce.

Scottish tea planter James Taylor started commercial tea planting in Sri Lanka (then Ceylon) in 1867. After the privatisation of the tea industry, the industry went through a number of changes, and the structure and management of the plantation sector also changed. While the State management had suffered losses despite the government’s efforts to avoid it, different parties had various opinions about the privatisation.

The Tea Planters’ Association of Sri Lanka, quoting the Presidential Commission on the Tea Industry and Trade in 1995, said that if privatisation had not taken place, losses incurred by the Government would have amounted to almost Rs 36.48 billion in today’s rupees. It added that when privatised, 35% of Sri Lanka’s tea land producing 25% of green leaf would go to regional plantation companies (RPCs), 63% to tea stall holders who now produce 75% of green leaf, and the rest would remain with the Government. It added that over the past few years, Sri Lanka’s tea industry has been burdened with high costs of production and low productivity, and that from 1992 to 2019, cost of production has risen from Rs. 78 to Rs. 615 per kilogramme. It also added that over the years, plantation sector workers wages per day have increased from Rs. 115 in 1998 to Rs. 750 in 2019.

The Association claimed that RPC employees are paid higher than many other sectors in the country, but agreed that a wage reform is necessary, and that the plantation sector companies will call for a productivity-linked earning model, i.e. paying workers for the amount of tea leaves they harvest. It further said that if plantation sector workers are paid productivity-linked wages, their monthly earnings will rise by at least Rs 6,250.

“Some of the best harvesters have plucking averages between 30-40 kilogrammes, meaning that earnings can now be expanded to over Rs 40,000-60,000 per month,” it added.

Meanwhile, the RPCs have recently submitted a revised wage proposal to pay plantation sector workers up to Rs. 1,108 on the request of the Minister of Labour Nimal Siripala de Silva.

According to the Planters’ Association of Ceylon, the daily wage of Rs. 1,108 consists of a basic daily wage of Rs. 725, price share supplement of Rs 50, Employees’ Provident Fund (EPF) and Employees’ Trust Fund (ETF) payment of Rs. 108, and an attendance and productivity incentive of Rs. 225.

They said that the proposal in question proposed a fixed daily wage model applicable for three days a week, and that on the remaining days, employees will be remunerated based on one of the two productivity-linked earning models, i.e. paying employees Rs. 50 for every kilogramme of tea leaves plucked, or the revenue share model.

They also urged the plantation sector trade unions to consider their proposal in the interests of the plantation sector workers, looking beyond political interests, adding that: “The trade unions have drawn a line in the sand, and now claim that what is best for our employees is a Rs. 1,000 basic wage without any productivity incentives or even the need to report to work regularly. In the process, they have rejected multiple offers, each of which delivers a fixed daily wage well in the excess of Rs. 1,000.”

They added that after the implementation of productivity models, plantation sector workers will have the benefit of flexible working hours and improved worker mobility where other family members can also contribute towards the earning process. Secretary General of the Planters’ Association of Ceylon said that the workers will have a say in when and how they work, and that this move will drastically improve their earnings in the process.

Meanwhile, Media Spokesperson and Former Chairman of the Planters’ Association of Ceylon Dr Roshan Rajadurai, speaking at a virtual press briefing recently, said that the people are their own agents and that they cannot have a colonial plantation model in the current context.

He added that the current wage model should be changed just like many other planting economics, and that what his organisation is proposing is a model where the plantation sector workers become self-managed and entrepreneurial, instead of the archaic, colonial-era attendance-based model.

He went on to say that the model they have offered easily enables plantation sector workers to earn more than Rs 1,000, and that a productivity-based wage model would make it possible.

“The problem in Sri Lanka’s plantation industry is that when estate workers go to the field, according to studies, they pluck (tea leaves) only 40% of the actual time spent in the field. Wherever they have operated a productivity-based, entrepreneurial, self-managed model in estates, workers are motivated, encouraged, and pluck well over 30-40 kilos (a day). As a result, they have a feeling the more they pluck, the larger share of the gain they will retain.”

A spokesperson for the Ministry of Plantation, on condition of anonymity, told The Morning that the Ministry of Labour has submitted a Cabinet paper in connection with the daily wage hike, according to his knowledge.

He further added that certain trade unions and workers have expressed willingness to pull out of the Collective Agreement in order to have the plantation sector workers’ daily wages increased to Rs 1,000.

He went on to say: “The Collective Agreement does not concern only the plantation sector workers’ salary, it also involves a number of perks and other matters concerning their jobs such as transfers and leaves. In addition, this agreement specifies when the wages should be increased and by how much.”

He told The Morning that the Ministry of Plantation would like it if it is possible to increase the daily wages of plantation sector workers.

He raised concerns that even though increasing the daily wage of plantation sector workers is of great importance, the trade unions have expressed willingness to withdraw from it on the basis of the daily wage issue, which is just one factor, and that it offers a number of other privileges as well.

Even though The Morning tried to contact the Minister of Labour Nimal Siripala de Silva, and the Minister of Plantation Industries Dr Ramesh Pathirana, they were not reachable.

Wages and perks under Collective Agreement

Convener of the Thousand Movement Chinthaka Rajapakshe, told The Morning that the idea of plantation sector trade unions and plantation sector companies pulling out of the Collective Agreement in a bid to resolve the daily wage issue is alarming, as that would cause adverse impacts. The main reason, according to Rajapakshe, is that the Collective Agreement specifies a number of perks for the plantation sector workers such as their retirement age, amount of work required to do per day, health benefits, leaves, and transfers.

Rajapakshe also raised concerns about the plantation sector companies’ claim that they might withdraw from the Collective Agreement in the process of increasing the daily wages, as in the event it happens, a problematic situation would arise concerning the working conditions of the plantation sector workers, including the number of working days, about which no agreement has been reached thus far. He also stated that the Wages Board, which is scheduled to meet on 19 February, is in a position to include such rights in the agreement, even though so far no decision has been taken in that connection.

“There is a problematic situation as to whether those rights will be protected and how,” he stressed.

He also said giving plantation sector workers Rs. 1,000 a day had been discussed for a long time, and that the EPF and ETF payments were initially planned to be calculated based on a daily wage of Rs. 1,000.

Speaking of the feasibility of the daily wage hike, Rajapakshe went on to allege that there is a mafia in the plantation sector.

He pointed out that currently, there are 22 RPCs in Sri Lanka, and that after 464 estates were privatised in 1995, their own auctions were held. He went to say that certain plantation sector companies have partner companies that engage in auctioning and exporting tea. He added that the production price in 2019 was approximately Rs. 416, while it was sold at Rs. 820. He alleged that these companies’ profit margins are hidden in this process, and that they attempted to get the Government to pay an allowance to the plantation sector workers saying that they would not pay it.

The Morning attempted to contact several plantation sector trade unions in a bid to get their stance regarding withdrawing from the Collective Agreement and whether they are satisfied with the ongoing discussions, but to no avail.

The plantation sector, especially the tea industry, is Sri Lanka’s single largest employer, and provides jobs for around two million people. Despite countless discussions and protests, the activists claim that the plantation sector workers’ daily wage issue has not been resolved yet, and that even if the daily wage was increased to Rs. 1,000, there are other issues as well that need the authorities’ attention.

While the public feels that a daily wage of Rs. 1,000 should not be considered a luxury taking into account the increasing cost of living, the plantation sector companies also claim that a pay hike is not as simple as it seems.

Now that the Government has actively become involved in this debate, can the workers actually expect a pay hike without losing their other perks?