Perfect little storm in a teacup 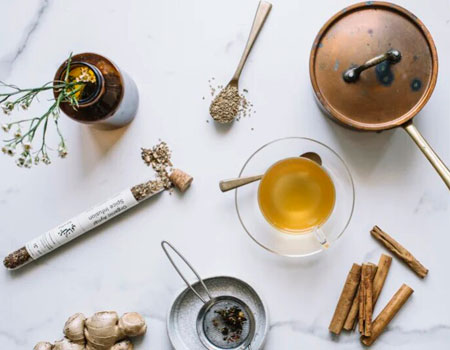 Before the first T2 store opened in Fitzroy in 1996, a cup of tea in Melbourne – or anywhere in Australia for that matter – was probably a black variety made by the likes of Lipton or Bushells. If you could find somewhere serving afternoon tea, it may have been difficult to muster any companions beside grandma for anything so dowdy.

Opening a shop dedicated to tea and teaware was “a really, really brave thing to do ... amidst this coffee explosion that was taking place in Melbourne at the time”, says T2’s current CEO, Nicole Sparshott. “The intention was to turn the world of tea on its head, to present this beverage that had been commoditised the world over, and to show people that you could blend it with the craziest ingredients imaginable.”

The world of tea still hadn’t moved far in 1998 when naturopath Lisa Hilbert started her Tea Tonic business. It was still “very unfashionable”, she recalls. “My family thought I was quite mad.” She focused on herbal blends for health and wellbeing, starting with her first product, Complexion, which is still made with red clover, nettle, dandelion leaf, calendula and burdock. “All the different teas that have evolved over the years have a different purpose,” says Hilbert.

Meanwhile, T2 slowly made a name for itself blending tea with everything from flowers to chocolate, as well as tea-free fruity infusions, and other tea businesses emerged around the country at an exponential rate. The Australian tea market is now worth $324 million. Fifty per cent of us aged 14 and above drink at least one cup per week according to a 2016 Roy Morgan study, with an average weekly consumption of 9.5 cups per person. Coffee is only slightly more popular.

Tea’s renaissance has been inspired by several factors, not least of which is a sense of fun that T2 helped cultivate, and which is also evident in Asian bubble tea’s rise and the revival of afternoon tea, now glorified as high tea. So many venues around Victoria offer this once-again-fashionable repast that there are almost enough for a different one every week of the year.

Growing interest in health and wellbeing has also seen tea embraced because of its antioxidant properties and low caffeine compared with coffee, plus the more specific benefits of herbal blends. The nation’s increasingly gourmet tastes have helped things along too.

“It’s a perfect little storm which is leading people to seek out better beverages and different beverages across the board,” says Renee Creer, co-founder of Tea Festivals Australia and Perfect South, which sells Victorian-grown green tea. “We are riding that wave in the tea category.”

After realising there were numerous events for lovers of other drinks, including coffee and wine, but nothing for tea-fanciers like herself, Creer started the Sydney Tea Festival in 2014. “I knew there would be dozens of people like me wanting something,” she says. In fact there were thousands: 5000 attended that first one-day festival, then 10,000 the following year. The festival expanded to Melbourne in 2016.

The annual event is “like Christmas for tea lovers”, says Creer. “There’s no other time of the year where people can come to the one place and drink dozens and dozens of teas and really find out what they like.”

The 2019 Melbourne Tea Festival’s 45 mostly tea-related stalls (there are also some food ones) reflect what Creer describes as an explosion of new tea enterprises in recent years, particularly in Sydney and Melbourne.

They’re “doing really creative and interesting things”, she says, highlighting stallholders such as Gulbarn, the company named for a northern Australian plant in the myrtle family, and Cobram Estate, the olive-oil business that has branched out into olive-leaf tea.

Other innovative small businesses coming to this year’s festival include: tea subscription services such as Tea Tasters; East Forged, makers of nitrogen-infused, cold-brewed tea in flavours such as yuzu and black tea; and Literary Tea Co, which makes blends inspired by authors such as Jane Austen and Hunter S. Thompson. They are available in book-shaped boxes, as well as monthly tea-and-book subscriptions.

There will also be numerous educational sessions, including the Melbourne festival’s first masterclasses. They are led by experts such as Impala + Peacock tea company co-founder Ruan de Witt, who will guide participants in blending their own tea, and Thibaut Chuzeville, tea sommelier at fine-dining restaurant Vue de Monde.

The fact that Chuzeville’s role exists shows how much has changed. Hospitality businesses are “realising that they just can’t have standard teabags any more, people are expecting better quality”, says Creer.

According to Sparshott at T2, which is now an international operation with 110 stores, consumers “are prepared to pay more for a cup of tea than they used to … People are starting to see the value in [tea’s production process] in the way they see the value in a good cup of coffee.”

That’s particularly evident at Harvest Index, a Collingwood shop dedicated to Japanese teas that opened in February (and is also represented at the Melbourne Tea Festival). In a space that’s part minimalist modern Japanese design, part science lab, one black and five green teas are available, some in up to four grades determined by the four annual harvests. It’s all grown on one farm in the Kyoto prefecture’s Uji region.

According to Harvest Index co-owner Lachlan Sinclair, “it’s quite a revered farm” in part because it was a pioneer of organic certification in Japan. He and his business partner visited the farm multiple times before choosing the six types of tea they now sell. “We just loved these particular varieties,” says Sinclair. They each “tell a unique story of Japanese tea”.

The different stories are about varied cultivation and processing, which influence features such as flavour and caffeine levels, plus the way each is prepared, including water temperature and steeping time. Harvest Index offers free 30-minute sessions with in-house tea master Rie Ohnuki, who guides customers through the variations.

“What we love about Japanese tea is it’s really about encouraging people to take time for themselves,” says Sinclair. “It can have as traditional a process as you like with specific weight, time and equipment, but it’s more about finding the time to create something and enjoy it.”

With green, specialty black, herbal and premium teas in general being the strongest categories in Australia’s growing tea market, Harvest Index would seem to have arrived at the right time.

Where do your tastes tend? Here are some pointers about the teas Victorians enjoy most, from various incarnations of the tea shrub Camellia sinensis to blends of other botanicals such as herbs and fruits – which, unless combined with tea, aren’t technically teas but rather infusions or tisanes.

Between picking and heating, tea leaves become increasingly dark due to oxidisation, so this is minimised for green-tea production. Although many kinds are manufactured and consumed in China, Japanese green teas are most common in Australia, especially sencha. Genmaicha, essentially sencha mixed with toasted rice puffs, and matcha, a powdered tea whisked with hot water – most notably in Japanese tea ceremonies – are also readily available.

Harvest Index is the best option for quality green tea, including the less common hojicha and mizudashicha styles.

The most common variety not only in Australia but also worldwide, black tea is allowed to fully oxidise before heating. Most comes from China (especially the Fujian and Yunnan provinces), India (particularly Assam and West Bengal, where Darjeeling tea is made) and Sri Lanka (also known as Ceylon tea). As with green tea, styles vary depending on factors such as growing conditions and processing methods. For example, Chinese lapsang souchong’s smoky flavour is achieved by drying tea leaves over burning pine.

Oolong is semi-oxidised tea that can be brewed several times – in fact it’s often best at the third or fourth steeping. In the southern Chinese Gongfu tea ceremony, the first filling of the clay teapot is ritually discarded. Pu’erh, also spelt pu’er, is tea from Yunnan that may or may not be oxidised before being compacted into discs, balls or bricks and allowed to ferment. Highly fermented pu’erh is “ripe” while partially fermented is “raw”, and more prized because it ages better, developing richer, more complex flavours over months or even years.

Most tea shops with a wide range offer at least a couple of oolongs. Festival stallholder Cloud Nine Teas also has a good selection of oolong and pu’erh, but new North Melbourne shop and festival attendee Kuura specialises in the latter.

This can be as commonplace as black tea and bergamot orange for Earl Grey, but other options abound. T2 has long led the charge with blends such as French Earl Grey. A mix of black tea, sunflower and rose petals, mallow flowers and hibiscus, it’s their most popular tea worldwide: apparently 22 million cups are drunk annually. Another favourite is Melbourne Breakfast’s black tea and vanilla blend, with 18 million cups consumed each year, but combinations can be as unexpected as green tea and strawberries (Gorgeous Geisha) or cocoa, beetroot, chicory, orange and black tea (Jaffalicious).

A flavourful blend so distinct it deserves its own category, India’s favourite drink is black tea and spices simmered together in milk. The traditional version is masala chai, whose spice combination is green cardamom, cinnamon, cloves, ginger and black peppercorns, but there are many variations.

The Original Chai Co sells two authentic chai blends. In addition to their Queen Victoria Market van, they will be at the festival alongside another quality chai purveyor, Calmer Sutra.

Around the world, countless plants besides Camellia sinensis are steeped in hot water to make drinks. Herbs such as peppermint and camomile are most common, but many other botanicals including flowers, fruits and spices are also used. Quite apart from being caffeine-free, they are often blended and consumed with health in mind.

T2 has an extensive range, with a particular flair for playful, flavourful blends, as well as teaware both pretty and on-the-go practical. Various locations, t2tea.com.

Kuura opened in 2018 specialising in high quality raw and ripe pu’erh tea, including premium products that can only be tasted by appointment. 104B Errol St, North Melbourne, kuura.co.

Lupicia has a wide range of tea and accessories, with a refined approach to presentation and labelling. QV, 14-16 Artemis Ln, Melbourne, 9662 9988, lupicia.com.au.

Tealeaves is a long-established shop with a large selection of teas and tea-making equipment, including novelty teapots. 380 Mount Dandenong Tourist Rd, Sassafras, 9764 2000, tealeaves.com.au.