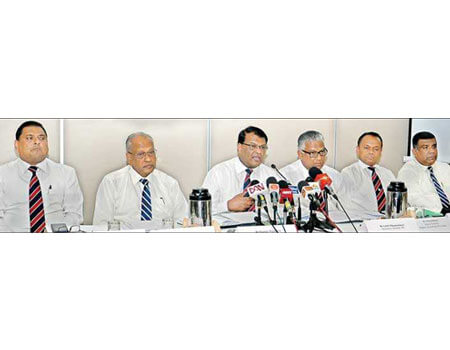 Amidst political paralysis in the country, the plantation industry is battling their own crisis over what it described as an “unfair” wage hike demand by unions, who have struck work causing nearly Rs. 2 billion in losses in a week, with more damage to follow if there is no solution.

The unions are on strike, demanding a 100% hike in basic wage to Rs. 1,000 per day, whereas the industry has offered a 20% increase to Rs. 600 per day. The Plantations Association revealed that with attendance and productivity incentives and price share supplement, the daily wage will be Rs. 940 per day, and if 22 kilos are plucked per day, the workers stand to get Rs. 1,055 per day which is higher than unions demand.

Even at the lower pay level of Rs. 940 per day, the annual wage bill for the industry will be a staggering Rs. 27 billion, apart from Rs. 16 billion in gratuity.

The strike action comes when the industry is tipped to miss the $ 1.6 billion export target for 2018, and production is likely to be 40 million kilos less.

“Given the current and future challenges, granting a basic wage hike of 100% to Rs. 1,000 per day is completely beyond our ability,” Employers Federation of Ceylon (EFC) Plantation Services Group Chairman and former Planters Association of Ceylon Chief Roshan Rajadurai told journalists yesterday.

“We are constrained with conditions beyond our control. Over 95% of Ceylon Tea is exported and those prices are determined not by us, but the world market. So we, as business people, can only pay the workers from the revenue we earn from selling tea and rubber. Even the current Rs. 940 we have offered based on the tea market average price, which should be around Rs.740 per kilo whereas it is Rs. 569, down by 6% from last year. This is the challenge that the plantation association is facing,” he explained.

In this challenging scenario, he said the RPCs have been brave enough to offer Rs. 940, which is a great risk.

“Considering the present circumstances of the industry, we have offered a very valid and a reasonable wage package - an increase of 20% on the basic, and a substantial increase working out to Rs. 3,375 per month. I believe it is a very fair increase, and I can’t see any reason why unions should reject such a good offer. We really have offered alternative schemes to encourage and reward productive people who are keen to earn more,” Rajadurai emphasised.

He pointed out that over the past 25 years, whenever the RPCs have signed the collective agreement, irrespective of the challenging market conditions, they have always paid the wages on the right days.

He also said that the RPCs are willing to pay Rs. 46 from the first kilo onwards, compared to Rs. 30 offered to the tea smallholders who now contribute to 75% of national production.

“Our offer is even far superior to tea smallholders, and in addition to the traditional facilities they are entitled to. We encourage people to be their own masters, rather than being shackled to this daily wage system, where they are expected to manage the harvest to the norm just to survive,” Rajadurai added.

“We are fast losing our world market share as a result of the continued strike. We will end up missing the usual export target of $1.5 billion, and fall below 300 million kilograms to about 280 million kilograms this year. Whatever negotiation or correction we will make now, it will still impact all our future endeavours negatively,” he added.

He cautioned that the country was fast losing the global market share, particularly the premium markets like Japan, while there is already pressure in the Middle East and Russian markets.

“As a result of the current market conditions globally, we have lost about 35% of the premium market like Japan, and already there is pressure in the Middle East and Russian market. There is going to be a huge impact to us. So if we do not retain our market share of good quality tea, and if locally the market is not sustainable, we are fast going to lose that position,” he cautioned.

Pointing out that Sri Lanka is only producing 6% of the global tea supply, he said that other tea-growing economies like Kenya, India, and Indonesia are fast catching up the world market share, with larger volumes of supply.

Elaborating on the unfortunate situation of the tea prices in the current condition, he said tea prices are slipping from last year to this year. “It has declined about Rs. 60 and it continues to slip every week Rs. 10 to Rs. 20. What is more alarming is that about 30% to 35% of our teas are unsold,” he added.

The current industrial dispute will have a major impact on the one million people depending on this industry, where only 16% of them are working in the RPC, while others are looked after by them for health, housing, welfare, education and many more.