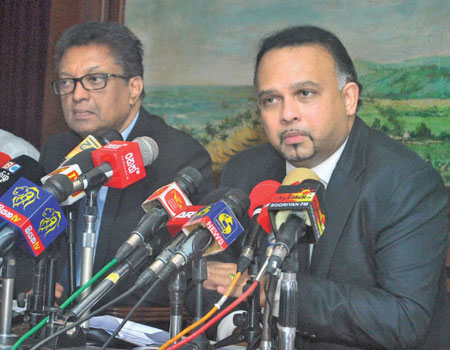 The Minister said that though Regional Plantation Companies (RPC) account to 73% of management of tea estates, he was not happy in the manner in which most of the RPCs were operating. “There is a drop in production as well.”

The RPCs were only given to manage the estates (in 1992 by then President R. Premadasa) and one must remember that they are not the owners of them but only administrators.

“We are closely following them (RPC) and they should also look at some of the problems that erupted in the plantation sector with a more humanitarian angle. It is to overcome some of the issues that we are proposing an out grower model”.

Dissanayake also said that the though there was an issue for higher wages, it is the Sri Lankan tea industry that pays the highest returns which is around Rs. 800 per day plus EPF, ETF, and gratuity for estate workers. “In contrast in Vietnam and Kenya average wage is around US$ one per day”.

Despite this Kenya now accounts the highest tea exports averaging around 800 million Kilos last year as against 303 million Kg from Sri Lanka.

He said that while the workers expects high returns they should also contribute to increase in productivity and help to increase cash flows of RPCs.

He said that they are egging on the Tea smallholders with high replanting subsidies and fertilizer subsidies as more green leaf is needed. The current buying price of a kilo (Rs. 80) is very attractive. The Minister also said that labour too is a major issue for the plantation sector but ruled out the importation of workers.

Iraq emerged as the no. 1 buyer of Ceylon Tea during the year 2018 with 38.5 m. kgs. followed by Turkey, Russia and Iran. The war situation in Iraq has been controlled to a great extent which is facilitating a better environment for business.

The continuing economic sanctions against Iran by the UN and the tougher sanctions imposed by USA after November 5, 2018 made it even more difficult for Ceylon Tea to reach Iranian territory.

The Minister said that this is still a gray area due to sanctions imported by Iran.

“However eight countries have got the green light to do trade with Iran and diplomatic efforts are on for Sri Lanka to be nominated as the ninth country”. The new year has commenced with optimism where a friendlier climate for tea is anticipated, a strictly monitored application of Glyphosate allowed and the Trade Unions in the tea plantation sector reaching agreement for the wage hike. “Therefore, a production volume of around 315 m. kgs. a 5% growth is projected for 2019”.

The Minister said several meaningful steps were taken to enhance Sri Lanka tea which even included raids of estates with the assistance of STF. Sri Lanka Tea Board would implement green leaf enhancement programme which would improve the productivity and quality.