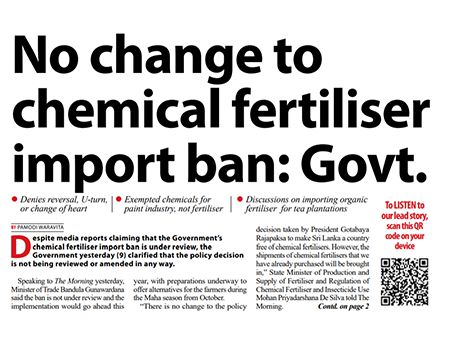 Despite media reports claiming that the Government’s chemical fertiliser import ban is under review, the Government yesterday (9) clarified that the policy decision is not being reviewed or amended in any way.

Speaking to The Morning yesterday, Minister of Trade Bandula Gunawardana said the ban is not under review and the implementation would go ahead this year, with preparations underway to offer alternatives for the farmers during the Maha season from October.

“There is no change to the policy decision taken by President Gotabaya Rajapaksa to make Sri Lanka a country free of chemical fertilisers. However, the shipments of chemical fertilisers that we have already purchased will be brought in,” State Minister of Production and Supply of Fertiliser and Regulation of Chemical Fertiliser and Insecticide Use Mohan Priyadarshana De Silva told The Morning.

However, the Department of Imports and Exports published the Gazette 2226/8, released last Thursday (6), which permits some items to still be brought into the country.

Commenting on the Gazette 2226/8, Treasury Secretary S.R. Attygalle told The Morning yesterday that this gazette only exempts certain chemicals from the import ban and that these chemicals would be used for other industries and not the fertiliser industry.

These statements confirm The Morning’s story last week which stated that approximately 116,000 metric tonnes (MT) of fertiliser are yet to arrive in the country from contracts that were signed prior to the ban.

Meanwhile, the Low Country Estate Labourers’ Union said in a press release last Saturday (8) that although the introduction of organic fertiliser to tea plantations is necessary, it is against hasty decisions that would harm the industry.

“If tea plantations are suddenly deprived of chemical fertiliser, it would cause a huge damage to the sector. We will be taking action if these decisions affect us unfairly,” the statement further said.

However, according to State Minister De Silva, discussions are underway to import a nitrogen-based organic fertiliser for the tea plantations sector.

Lanka Organic Agriculture Movement (LOAM) President Thilak Kariyawasam told The Morning last week that the Government’s hasty and inefficient implementation would only create a wrong and bad impression of what organic farming is as opposed to what it really could be.

Also raising concerns regarding the ban on multiple occasions, All Island Farmers’ Federation (AIFF) National Organiser Namal Karunaratne warned of both fertiliser hoarding and food supply shortages due to the ban.

On 29 April, the President said that Sri Lanka would become the first country in the world to take up the challenge to eliminate the use of chemical fertiliser, adding that necessary steps would be taken to facilitate the production of organic fertiliser at district levels.

The Cabinet of Ministers approved the proposal to ban all chemical fertilisers in Sri Lanka in the same week. The President’s Media Division (PMD) also noted that the Government incurs a huge healthcare expense in treating non-communicable diseases (NCDs) such as kidney diseases which arose as a use of chemical fertiliser and that this cost is increasing each year.