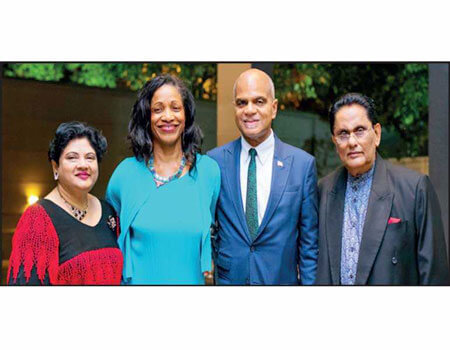 High Commissioner Dr. David Pollard of the Cooperative Republic of Guyana presented his credentials to President Maithripala Sirisena in early February this year. It is considered a significant and vital step to develop strong economic ties to South America, the furthest border of economic expansion

Ceylon Tea specially stand to gain, as well as gem stones. Sri Lanka is in a unique position to supply gem stones to Guyana which already has diamonds, gold and silver.

According to Honorary Consul Dayantha Laksiri Mendis, two such business initiatives are already underway and are being evaluated.

Recently, Guyana struck oil and is soon to become a high profile oil producer in Latin America, going into production with Exon Mobil. For Sri Lanka, this could mean an important source of fossil fuel, as an alternative to depending solely on the Middle East which holds risk.

Incidentally, Guyana is the only English speaking country in South America bordering on Brazil, Venezuela and Surinam.

Forbes Burnham, first Prime Minister of Guyana (1966) and later the first Executive President of the Cooperative Republic of Guyana (1980), was a founding member of the Caribbean Integration Movement.

Although separated by continents thousands of miles apart, we share many similarities. Both countries became British Colonies on the same day, and have similar constitutions with executive presidency and declare that sovereignty lies with the people. Both countries are endowed with many natural resources.

Guyana has gold, diamonds and other minerals. The famous mythical city El Dorado, where people were adorned with gold, was deemed to be in Guyana, close to the Brazilian border. Prior to British rule, both countries were Dutch colonies and still continue to apply Roman-Dutch law in certain areas.

Sri Lanka and Guyana have enjoyed friendly relations as members of the Non-Aligned Group.

In 1974, Sirimavo Bandaranaike visited Guyana and met Prime Minister Forbes Burnham in regard to 1976 Non-Aligned Summit in Sri Lanka. She was given rousing welcome by the Government of Guyana and school children were lined up on streets waving Sri Lankan Flags.