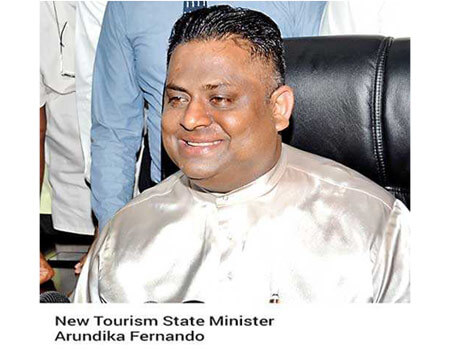 New Tourism State Minister Arundika Fernando last week promised to revive tourism as it has been made a thrust sector for economic development with new incentives.

“Tourism has been recognised as a thrust sector to rebuild the economy. Through the revival of the tourism industry, we can also uplift a number of sectors that are attached to it. It’s a challenging task, but we are confident of making this industry a key player in economic development,” Fernando said after assuming duties at the Ministry last Friday.

Fernando also pledged to support all stakeholders in the tourism industry, including young entrepreneurs and SMEs.

“There were many hotels, resorts and SMEs that went out of business post Easter Sunday attacks. President Gotabaya Rajapaksa and Prime Minister Mahinda Rajapaksa are keen on supporting them with the necessary financial assistance and will soon discuss with the banks to revive those businesses,” he said.

The State Minister also said that new measures will be introduced to promote Sri Lanka promptly in India, China and Europe, which are key source markets of the country.

“It was unfortunate that the national carrier stopped flying to some of our key source markets in Europe, and we hope to discuss with SriLankan Airlines to restart at least one route from Europe. It’s important to note that Germany has been a key partner in building our tourism industry. I also want to promote the Ramayana trail to attract a large number of Indian traffic to Sri Lanka,” Fernando added.

He said Sri Lanka Tourism expects to tie up with institutions such as the Sri Lanka Tea Board and Sri Lanka Cricket that are world-renowned to promote the destination worldwide. In addition, he said they hope to engage celebrities and professionals for promotional activities.

Noting that Sri Lanka was well-known as the pearl of the Indian Ocean, blessed with many natural resources in a compact island, he said it is an ideal destination that travellers look forward to for their getaways.

Reiterating the challenging the task ahead, the State Minister called on all officials of the four institutions under the Tourism Ministry to work efficiently to revive the industry and to uplift the living standards of all stakeholders engaged in it.