Myth and history blend at this British-era cemetery 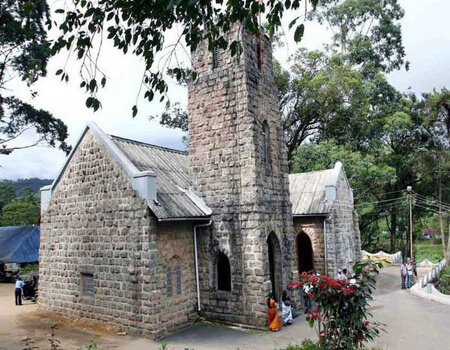 Cemetery near old Munnar turns 125 years, and has a love story behind it

On a small hill near Old Munnar stands a British-era church in Gothic style, a memorial of a love story of a British couple during the period of early tea plantations at Munnar. The British cemetery adjoining the church is observing its 125 anniversary.

The two Raj-era churches still beautifully kept in the district are the one at Old Munnar and the other at Pallikunnu, near Kuttikkanam. The two churches have British cemeteries and the Munnar church was built after a cemetery was established. Myth and history are interwoven in the Munnar cemetery, where 24-year-old Eleanor Isabel May, who died on December 23, 1894, was buried. According to available data, Ms. May was married to Henry Mansfield Knight, who was the general manager of a British tea company. They got married there in 1894 and she died the same year. It is said that the couple walked through the hills and valleys of Munnar every evening. One day when they reached the top of a hill, she told her husband that she should be buried there if she died. The next day she fell sick with cholera and died.

Though her relatives wanted her body to be brought to England, Mr. Knight wanted her last wish to be fulfilled and the body was buried on the hill. Afterwards, other Britshers too were buried here, and a church came up on the hill subsequently. The work on the present church was started by Mr. Knight and his friends in 1910 and it was completed the next year.

The grave of Isabel May is separated by a wall. Her name and the date of death are visible on the tomb.

Those visiting Munnar also visit the church and pay tributes to Ms. May. The hill provided a beautiful view of the valley of yore and the love story added to its charm, said Kiran Mathew, who has studied the Munnar plantation history. According to him, a British township existed on the bank of the Old Devikulam Lake.

A church official said there would be no special programme in connection with the 125th anniversary of the first cemetery. It will be a silent observance, according to the official.