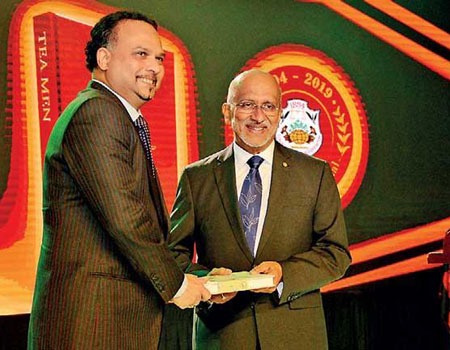 Sri Lanka’s top executive’s lack of knowledge in modern agriculture led to ad hoc decision-making in the plantations sector, threatening an entire industry, which brings in significant foreign exchange to the country, a top minister asserted.

“I say this boldly now. The executive doesn’t understand modern agriculture. I don’t want to fight this fact. Whether it’s the glyphosate issue or palm oil issue, the co-operation between the executive and my ministry has been very weak,” Plantation Industries Minister Navin Dissanayake said.

He made these remarks delivering the keynote address at the 125th anniversary celebration of the Colombo Tea Traders’ Association (CTTA), in Colombo, last Friday.

Dissanayake highlighted that lack of scientific approach to agriculture, farming and plantations has been a key failure during his current tenure as the Plantation Industries Minister.

Illustrating an example, he noted that the government made a policy decision to move ahead with the previous regime’s decision to allow the Regional Plantation Companies (RPCs) to plant palm oil in 20,000 hectares for the sustainability of the RPCs.

However, he pointed out that it has now come to a halt due to the lobbying of certain parties with vested interests.

“Certain parties with vested interests that have no idea about scientific farming and agriculture raised concerns about the adverse effects on the ecology by palm oil.

We have always stated emphatically that we, in the Plantation Industries Ministry, can tackle this issue by addressing the environmental concerns.

There can be a win-win situation for both palm oil producers and also for the environmental lobby,” he said.

Currently, the RPCs are awaiting the green light from President Maithripala Sirisena to plant Rs.400 million worth of palm oil plants, which are at their nurseries. The RPCs fear that these plants will be too mature to plant if the go ahead is delayed. They have already planted palm oil in 11,000 hectares.

Dissanayake also lamented on the nearly three-year ban on popular weedicide, glyphosate, which forced planters to shift to unrecognised weedicides such as MCPA that led Japan to temporarily suspend Sri Lankan tea exports.

“The glyphosate issue was a self-imposed problem that should have never risen. I always have taken the correct position that commercial agriculture requires weedicides despite the fact that it is not popular.

Meanwhile, ending his five-year tenure at the CTTA, Outgoing Chairman Anselm Perera said an “irrational ban” resulted in Ceylon Tea exports being replaced by the teas of other origins in the Japanese market.

He noted that the Lankan tea exporters are still struggling to recapture the lost market share in the Japanese market, as Ceylon Tea is replaced by cheap teas from countries such as Indonesia.

“Unfortunately, those in high office never listen to reason, until a major crisis develops. Japan switched buying to other origins; we lost businesses. The absence of Japan in the Colombo Tea Auction created a domino effect, resulting in lower prices overall,” Perera said.

Speaking of the future of the industry, Dissanayake emphasised that the currently underfunded industry research institutions need to be empowered with the involvement of the private sector.

We only spent about Rs.40-50 million in capital funding but a tremendous amount in recurrent expenditure. Actual reforms to the research institutes to make them market-oriented have been lagging. Therefore, lot of work has to be done,” he said.

Despite the challenging four years, he noted that macro-fundamentals for the Sri Lankan tea industry now remain strong, compared to 2014.

“There was a dark period when I assumed the office, where the prices were low at Rs.60 per kilo and our production was coming down to 240 million kilos.

However, the prices picked up and production also picked up. We were also able to resolve the wage negotiations very quickly, which dragged for one and half years,” he added.

Dissanayake shared that he doesn’t intend to continue as the Plantation Industries Minister, once his term ends next year.

“As I constantly change my team members, I also believe that the ministers also should change,” he said.

The Colombo Tea Traders’ Association (CTTA) last Friday held a workshop to develop a road map for the Lankan tea industry by setting several targets to be achieved by 2030.

CTTA past Chairman Michael de Soyza revealed that the industry targets to increase its exports to 350 million kilos, earning over US $ 3 billion foreign exchange by 2030.

According to him, former Sri Lanka Tea Board chairpersons Rohan Pethiyagoda and Janaki Kuruppu have made presentations during the workshop to provide the necessary initial guidance to the industry.

De Soyza emphasised that enhancing the quality of high grown tea to its former days and aggressive marketing and promotions would be crucial to achieve these targets.

“Branding and marketing should go hand in hand with production. Irrespective of the assertions and negative comments of the Auditor General, we must spend money on marketing and promotion, as it’s imperative to get a better price for the end product,” he said.

He stressed that the government must let the industry take charge of the promotion funds, which are collected from exporters.

“We need to control and drive the Ceylon Tea message without leaving it in the hands of bureaucrats to control,” he added.

He also emphasised that the government should provide assistance to the RPCs, similar to smallholders, while noting that the RPCs struggle with low productivity and high costs.

Further, he commented on the lack of measures taken by Sri Lanka’s plantation sector to become resilient for climate change.

“As far as I’m concerned, only Elpitiya Plantations has embattled these challenges by investing in sustainable measures such as rain water harvesting and solar power,” he said. De Soyza expects that the road map will result in doubling the real earnings for estate employees and smallholders, over the period.