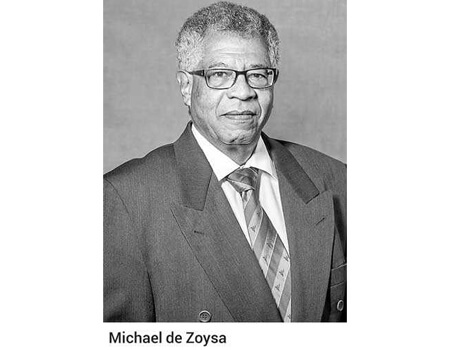 It is with profound sadness that the Colombo Tea Traders’ Association, the apex body of the country’s tea industry, announces the demise of Michael de Zoysa on 29 September 2019, just a day before his 73rd birthday. His mortal remains were interred at the General Cemetery Kanatte on 2 October 2019, in the presence of a large gathering.

The late de Zoysa, on completing his secondary education at S. Thomas’ College Mt. Lavinia, joined the multi-national tea company, Lipton, in 1966, as a trainee Executive, and retired, following an outstanding career, in the year 2000, as Managing Director of Unilever International Tea Division – Lipton/Brooke Bond.

After his retirement, he continued active association with the tea industry, as mentor and consultant to a number of tea-related organisations and events, and also played a dynamic role as Chairman of the Organising Committee in all but one of the Colombo International Tea Conventions, acknowledged globally as the preeminent forum on Tea, conducted by the Colombo Tea Traders’ Association every four years, from 1992 till the most recent in 2017, to commemorate the 150th Anniversary of Ceylon Tea.

He had the unique distinction of having held the office of Chairman of the Colombo Tea Traders’ Association for 14 tenures, considerably more than any other Chairman in the history of the Association, for 17 years from 1983 to 1999.

De Zoysa was bestowed the singular honour of Honorary Life Membership, conferred upon him by the Colombo Tea Traders’ Association, for his service and contribution to the Association and the Tea Industry.

In August this year, as a tribute to the admiration in which the Colombo Tea Traders’ Association held de Zoysa, he was invited as Guest of Honour at the iconic event of the 125th Annual General Meeting of the Association.

The Colombo Tea Traders’ Association offers its condolences to the bereaved family: his wife, Manique, and his daughters, Lara and Natasha.