Home>Publications & Articles>Articles>Media Articles>Meet a Tea Sommelier: She’ll Tell You You’re Most Likely Drinking Your Tea Wrong
Gabrielle Jammal will show you how to really drink tea.

Meet a Tea Sommelier: She’ll Tell You You’re Most Likely Drinking Your Tea Wrong
Gabrielle Jammal will show you how to really drink tea. 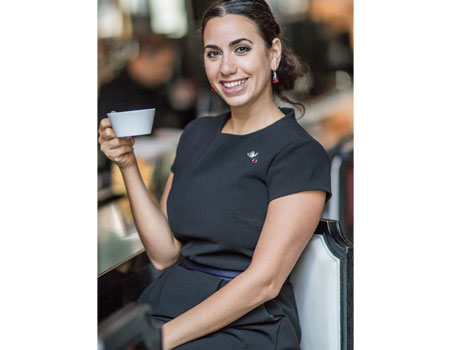 Gabrielle Jammal wants to change the world, one cup of tea at a time.

As a certified tea sommelier—yes, that’s a real job—she runs the afternoon tea program at the Baccarat Hotel in New York City. While delicious beverages and savory scones are part of the menu, her mission is to inspire guests to better understand tea.

“It has such a warm and fuzzy feeling for so many people,” says Jammal. “Everyone in the world drinks tea—men, women, children, people of different ages and walks of life. It gets me so excited.”

Tea does seem to transcend boundaries. It holds a special place in cultures around the world, from Great Britain to Japan. But in the United States, it’s still largely underappreciated. While afternoon tea has become a social gathering, especially at luxury hotels like the Baccarat, many guests still don’t understand the tradition. A common sight at any afternoon tea these days is a three-tiered server of petits fours and cucumber sandwiches, a phone cued up to Instagram, and guests unconsciously dumping cream and sugar into a teapot; there is little regard for the subtleties of the brewed beverage.

Some of that’s changing, Jammal admits, thanks to tea’s touted health benefits and foray into mainstream wellness. When it comes to actually drinking tea, though, there’s so much more to it than a packet of Lipton. As a tea sommelier, Jammal makes sure you know that.

For starters, Jammal treats her tea list like a wine list. If she showcases tea like alcohol, she says, people are motivated to think about it in the same way. “It helps people understand that tea has complexity of flavor,” she explains. The list is carefully curated to include traditional styles and regions, but it doesn’t stop there. It also includes herbal infusions—“herbal tea” is a misnomer since it’s not made from the tea plant—and newer styles from well-known regions. For example, India has recently started making white teas, historically crafted in China, as well as processing certain flushes of Darjeeling (a flush is a growing season) in more experimental fashions. You can find both on her menu. She likes to collaborate with small producers and local companies, like In Pursuit of Tea, a business based in Watertown, Mass., that sources teas from farmers around the world and sticks to natural ingredients. As many of today’s consumers want to know the faces behind the brands, she appreciates that her tea partners can provide that to the Baccarat guests.

As much as Jammal can nerd out on trends, hospitality is still at the core of being a tea sommelier. Not only does the Baccarat Hotel offer elaborate services named for the brand’s famed clients—the Tsar Nicholas II caviar tea for tea with a bottle of Krug Grande Cuvée Champagne will set you back $600, while the King Louis XV French-inspired spread is a more modest $65—but Jammal also recently introduced a vegan tea menu. It includes vegan versions of standbys like scones and also special nibbles like a white asparagus tart and black truffles on a blini. Her intimate pairing dinners feature tea and alcohol tastings that complement three-course meals—in case you thought tea was only for breakfast. The Baccarat plans to offer a highly authentic Japanese green tea experience, but that’s still in the works. (“The Japanese level of detail takes time to master,” Jammal says. “I want to do it justice.”)

All of this wouldn’t be possible without her extensive knowledge of everything tea. Jammal started drinking black tea as a young child with her British grandmother. Though treats came in the form of packaged biscuits and simple sandwiches, she still fell for the entire experience. Fast-forward to adulthood, and Jammal found herself in the hospitality industry.

As others focused on mixology and wine sommelier apprenticeships, Jammal was all about tea. She continued her education by working at Teavana Tea Company, studying with producers, and adding a collection of certifications to her name. One in particular, bestowed by the International Tea Masters Association, designated her a tea sommelier. “[At the time] I actually didn’t know that the job title existed,” Jammal says, who is one of only two on the East Coast today. “If you googled ‘tea sommelier,’ nothing came up. I just knew I wanted to share the love of tea, so I took a leap of faith.”

Jammal was familiar with a wine sommelier, and that’s why she approaches her job in much the same way. A lot of what Jammal does is education. At any given service, she tries to stop by every table to discuss tea. She encourages her staff to have a connection with certain teas so they can talk about them. And she constantly debunks myths. One misconception? That all teas should have milk and sugar.

“We, as a culture, have been so used to bad teas that people like to cover up the bad tea flavor with all the additives,” Jammal says of milk, sugar, and honey. “But they can change a profile completely. That is not something people think about.” She advises that guests always try the tea first and contemplate the taste before deciding on alternative ingredients. Jammal often answers questions about antioxidant and caffeine levels in tea, including that decaf does, in fact, have caffeine. While the responses are sometimes complicated, she appreciates that guests ask at all. It proves tea is becoming more approachable, and guests are less intimidated by a list that reaches far beyond Earl Grey.

“We want this awareness,” Jammal says. “One cup of tea can change people’s minds, and that can change your life.”