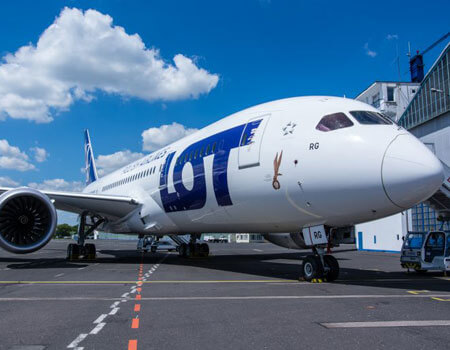 LOT Polish Airlines’ Boeing 787 Dreamliner landed in Colombo inaugurating LOT’s first regular, seasonal winter flights to Asia. The flight, during which the aeroplane flew 7,283 km lasted 9 hours. From now until March 28th flights to Ceylon Island will be operated three times a week. This way LOT boosts the tourism traffic from Poland and other European countries to Sri Lanka.

LOT Polish Airlines, a Star Alliance Member, has launched today regular seasonal flights between Warsaw and Colombo. Until March 28th Boeing B787-8 and B787-9 will be operating this route three times weekly according to the following schedule:

– Colombo is already the seventh LOT’s flight destination in Asia and the first launched regular seasonal winter flight to the region. We fully benefit from our modern and long-distance fleet and we select destinations that have the biggest potential. For many years, Southern Asia has been one of the most frequently chosen alternative to more traditional travel destinations during winter by the growing number of tourists. Almost two million passengers travel from Europe to Colombo annually. This winter, thanks to our offer, passengers will be able to travel to the paradise island of Ceylon, – says Rafał Milczarski, CEO of LOT Polish Airlines.

The schedule of flights between Warsaw and Colombo has been planned in a way that provides passengers with the shortest flight with one short transfer (50 minutes) at the Chopin Airport in Warsaw, from most of the cities using LOT services in Poland, Western Europe and Scandinavia, Baltic countries, Prague, Budapest or Zagreb.

Ceylon, which is located in the Indian Ocean, attracts tourists with its endless sandy beaches, rich fauna, ancient architecture and distinctive cuisine. The country itself is one of the largest supplier of tea in the world, which explains why its vast majority is covered with tea plantations. From November to March, the average temperature on Sri Lanka reaches 30 C, which makes it a perfect destination for those who long for the sun during winter.

–Thanks to the cooperation between LOT and travel agencies, every year, our Dreamliners fly to many exotic destinations which are chosen by our passengers as their holiday destinations. I am happy that we took a step forward by introducing the first regular seasonal flights to Asia. This will be also a great offer for Sri Lankans who plan to visit Europe or the US or Canada during winter,- Rafał Milczarski adds.

The newly introduced flights will be carried out with modern wide-body aircraft – Boeing 787-9 Dreamliner. Each will provide three classes: LOT Business Class with seats reclining to a position of a flatbed and a kitchen that could rival the best restaurants; LOT Premium Economy Class with larger individual space, comfortable seats with footrests and thighs support, cocktail tables and a rich menu, and LOT Economy Class with modern seats equipped with individual screens, USB ports as well as freshly prepared and diverse dishes from the region.

The introduction of flights between Warsaw and Colombo is an element of the profitable growth strategy which LOT has been implementing since 2016. Most of that strategy has been implemented ahead of time. Poland’s flag carrier is constantly developing its fleet. LOT just received its 15 Boeing 787 Dreamliner. Two additional and larger Dreamliners will be added in the spring of 2020.

Last year, over 8.9 million passengers chose LOT, which is 2 million more passengers than in the previous year. In December, the Polish air carrier plans to provide services to 10 million passengers. Currently, LOT uses 90 modern aircraft on a daily basis.

In its offer, the carrier provides over 110 flights, including 17 long-haul flights.