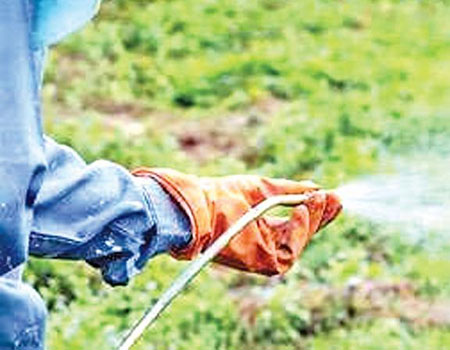 Releasing a statement on Friday, the Association said, “We are indeed happy that this disaster which was inflicted on the tea industry that created financial, commercial and reputational losses has come to an end."

The statement in full:

The Colombo Tea Traders' Association, the apex body of the country's tea industry, and all the industry stakeholders are deeply indebted to the President, for his keen perception and sound judgment, and to the Minister of Plantation Industries, for his unrelenting efforts and dynamic endeavours, in achieving a successful resolution to this long-outstanding issue.

The Colombo Tea Traders' Association and the entire Tea Industry convey their sincere gratitude to the President and the Minister of Plantation Industries, for the vital roles they played in rescinding the ban on Glyphosate imposed in 2015, which had created a serious crisis vis-à-vis the Japanese market, with imminent consequences of a total suspension of imports of Ceylon Tea to that country.

If this had transpired, it was inevitable that other countries which favour Ceylon Tea above all other producer nations would also have introduced regulatory measures, with catastrophic consequences

Of Japan's total tea imports of 29 million kgs per annum for its domestic consumption, 8 to 10 million kgs comprised primarily the best quality premium grades of Ceylon Tea, at a value of US$. 45 to 50 million.

The diminished competition caused by Japan's absence of participation at the Colombo Tea Auction would have adversely affected the prices realized on approximately 50 million kgs of tea offered through the auction, to an estimated extent of Rs.150 to 200 per kg, which would have accounted for an exponential loss of about US$. 50 to 65 million.

This would have seriously impacted the tea plantations, the small holders and over two million workers, directly and indirectly dependent for their livelihood on the tea industry, exacerbating the detriment to which the tea industry had already been subjected over the preceding three years.

The judicious application of Glyphosate on tea plantations, which had stood the test of time over a period in excess of 40 years without any inimical effect, was inexplicably halted by the ban of its use in 2015. Since there were no perfectly suitable alternatives to replace it, the Tea Industry was compelled to apply other available herbicides, weedicides and chemicals to control the proliferation of weeds in plantations, which was significantly affecting yields.

The drop in production cost the tea industry a loss of Rs.26 billion each year. Furthermore, since the maximum residue levels (MRLs) for these particular chemicals imposed by Japan on imports of tea were too low to accommodate adherence, Japan had already commenced rejecting substantial volumes of tea consignments from Sri Lanka for non-compliance with the prescribed MRLs which can otherwise only be achieved by using the world's most accepted herbicide in the international agricultural world.

Sri Lanka's competitors among all other producer countries were placed at a distinct advantage through the continued use of Glyphosate on their tea plantations as a weed eradicator. Consequently, in substitution, a large percentage of purchases of Tea usually procured from Sri Lanka were being obtained from other origins, adding to the already considerable losses being incurred by the tea industry and the country.”