After a struggle of over 20 years, Parliament last week enacted two key pieces of legislation that activists and academics believe will improve living conditions and development in one of the country’s most neglected sectors 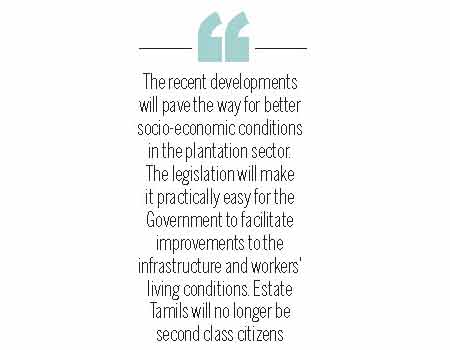 Two pieces of landmark legislation were enacted in Parliament last Wednesday to uplift living conditions and development indices for impoverished and marginalised plantation sector communities in the island.

The passage of the laws is a major victory for activists and communities in the plantation sector – historically one of the poorest segments of society in Sri Lanka – who have engaged in a decades’ long struggle to improve the quality of life for residents in the regions.

Over a million people live in Sri Lanka’s plantation or ‘estate’ sector in appalling conditions and are heir to a brutal colonial legacy of exploitation. These workers, originally shipped out to the island from India as labour in the British tea and rubber plantations, have struggled since before independence to be treated as equal citizens, be entitled to a living wage, and to live in healthier conditions. Every Government that comes to power in alliance with political representatives of the plantation communities pledge to make them land owners and upgrade poor living conditions. But decades in and decades out, the sector remains one of the most neglected.

The estates lag behind in social-development indices compared to rural and urban sectors of the country. The prevalence of malnutrition, especially among mothers and children under five, and low birth weight rates were high in the estate sector compared to other regions of the country according to World Bank studies. The estate community has been underserved and excluded from the development process for many years. They even lost franchise in 1948 through the Ceylon Citizenship Act and regained it only in 1964.

The two bills moved last Wednesday in Parliament had the unanimous consent of the House, and across the political divide all members who took the floor commended and embraced the proposals in a rare show of unity. The first Bill was to set up a new authority to develop new villages in the plantation region of Sri Lanka. The second Bill was to enable utilising Pradeshiya Sabha Funds for development activities in estate settlements in concurrence with the administrative authority of the relevant estate.

If implemented, the two laws could mark a turning point for people in living in the plantation sector, according to their elected representatives.

The Bill to set up an authority known as the ‘New Villages Development Authority for Plantation Region’ was moved in Parliament by Hill Country, New Villages, Infrastructure and Community Development Minister P. Digambaran. The minister expressed his confidence that the new Authority would help streamline and speed up the Government’s on-going programme to construct new houses in seven-perch alienated lands for plantation workers and their families.

Former Minister W.D.J. Seneviratne pointed out that the seven-perch proposal dated back to 1970s, while expressing his contentment that the proposal was gradually being implemented on the ground.

Going a further step ahead, the Government has started giving the Right of Possession (bukthiya) of those lands to the estate families.

The New Villages Development Authority for Plantation Region will coordinate the construction of the houses on these alienated lands for plantation workers. The new villages will replace the existing line room housing in estates with single houses and improved basic infrastructure facilities within those estates. The new Authority will cover all the plantation estates that fall under regional plantation companies, Sri Lanka State Plantation Corporation, Land Reform Commission and Janatha Estate Development Board.

The Authority will be responsible for coordinating the planning and implementation of development projects in the plantation region.

The Government said that with this move, it was aiming to include the plantation community into the social mainstream by socio, economic, cultural and infrastructure development in the plantation region. The new Authority will work in collaboration with other national, provincial, and district level implementing agencies in the plantation region. In other words, it will serve as a special vehicle to bring all the relevant line ministries and institutions together to work for the betterment of living conditions of estate people.

It will assist the youth in the estate sector to enter the tertiary and higher educational institutions to pursue education. It will also promote alternative livelihood opportunities and provide necessary guidance and inputs in respect of them to the estate communities. Land degradation is a major environmental issue in tea plantation areas in Sri Lanka. The new Authority has been tasked with strengthening conservation measures aimed at minimising physical degradation of land and water resources and eliminating environmental pollution in estate lands.

The Board of Management of the proposed Authority will consist of 13 members including seven ex-officio members. The ex-officio members are from seven Ministries namely the Plantation Industries, Finance, Public Enterprise Development, Provincial Councils and Local Government, Housing and Construction, Land and Hill Country, New Villages, Infrastructure and Community Development. One of the appointed members will be from the Planters’ Association of Ceylon to represent the plantation companies. Institute of Social Development (ISD) Executive Director P. Muthulingam pointed out that the two Bills were a result of continuous lobbying and striving by plantation workers and their representatives.

“I started lobbying for an amendment to the Pradeshiya Sabha Act way back in 1994. I pointed out the need to change the law to clear the bottlenecks that impede development in the estate sector. It gathered steam in 2005, but it took more than another decade to realise it,” Muthulingam explained. He said the law that previously prevailed had hindered elected members of Pradeshiya Sabhas from carrying out any development activity within estates. “It was in a way a deprivation of the plantation community of their right to development,” the ISD Executive Director remarked.

Speaking during the second reading debate of the Bill, JVP MP Vijitha Herath however pointed out that it is necessary to make similar amendments to the Urban Councils and Municipal Councils Ordinances too as all estates do not come under Pradeshiya Sabhas. Local Government and Provincial Councils Deputy Minister Shriyani Wijewickrema also reminded the House that changing the law alone would not help if Pradeshiya Sabhas are not given adequate funds. Muthulingam was however optimistic that the recent developments will pave the way for better socio-economic conditions in the plantation sector.

“The legislation will make it practically easy for the Government to facilitate improvements to the infrastructure and workers’ living conditions. Estate Tamils will no longer be second class citizens of this country,” he summed up.