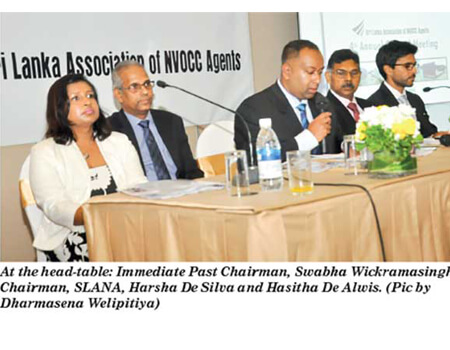 He said on his travels to many parts of the world, when asked where he was from, he replied ‘Sri Lanka’. However, people most didn’t recognize his origins, but when he said he was from the country that produced Ceylon Tea, they knew where he came from.

Speaking as the chief guest at the fourth Annual General Meeting of the Sri Lanka Association of Non Vessel Owning Container Carriers Agents (SLANA), he noted that the strength of the Ceylon Tea brand persisted throughout its 150 year history.

Despite the Covid-19 disruption to commercial activity, experienced worldwide, Sri Lanka’s tea industry continued in an atmosphere of ‘business as usual’, he said.

Apart from a two-week spell of recalibrating options, usual tea auctions resumed. Tea exports to routine destinations continued with no interruptions and the deserved continence of normality was swiftly restored. The cry–out system is now replaced by an electronic mode for bids for such consignments. The industry’s resilience to disruption was fully endorsed and even during the second world war, the tea industry in the country continued with no interruption, De Alwis further said.

Forex earned from tea amounted to around US$ 1.5 billion. The industry is directly responsible for the employment of about one million people. Additionally, those indirectly in employment and dependent on the industry also numbers about one million, In effect, two million persons, or about 10 percent of the population are dependent on tea, he outlined.

“Three hundred million kilos or 300,000 metric tons of tea are exported to these countries each year”, he elaborated.

Although, tea is not the main foreign exchange earner any more, its dependent factor to the economy is acknowledged and accepted as the net leading earner and the only indigenous commodity that is self-reliant generating valuable forex, de Alwis stressed.

Chairperson, SLANA, Harsha De Silva, in his annual address to members said although the Covid-19 pandemic adversely affected the economy over the past seven months, there is gradual recovery now.

The number of containers lying idle in the port runs into thousands. However, as requested by the authorities, members of SLANA were able to convince the respective Non Vessel Operator Common Carriers and principals to secure demurrage waivers, discounts in demurrage charges and increase the number of free days.

He said about 45 members of SLANA visited the Hambantota Terminal last year, which was well received.

He also referred to the salutary services rendered by Captain Rajendran.

Secretary, Swabha Wickramasinghe proposed the vote of thanks.