Is There Nicotine in Tea? Everything You Need to Know 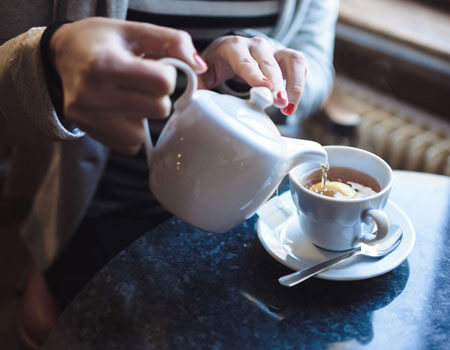 Tea is a popular beverage worldwide, but you may be surprised to learn that it contains nicotine.

Nicotine is an addictive substance naturally found in some plants, such as tobacco. Trace levels are also found in potatoes, tomatoes, and tea.

Despite being present in tea, it’s absorbed differently than the nicotine in cigarettes and poses very little risk to your health.

Still, you may wonder about its safety.

This article reviews nicotine in tea, including how it’s absorbed and whether it affects your health.

Tea leaves, alongside a few other fruits and vegetables like potatoes and tomatoes, contain nicotine — but only in small levels.

Studies note that black, green, and oolong teas, including instant varieties, may harbor up to 0.7 mcg of nicotine per 1/2 tablespoon (1 gram) of dry weight.

Furthermore, one study revealed that brewing tea for 5 minutes released only about half the amount of the nicotine in dry tea into the drink.

Nicotine in tea is absorbed differently

Nicotine in tea is absorbed differently than the nicotine in cigarettes and other inhaled tobacco products, making it less harmful and addictive.

The nicotine in liquid tea is broken down via your digestive tract. This process can last several hours depending on how much you drink, as it takes approximately 45 minutes for 1 cup (240 ml) of liquid to empty from your stomach into your small intestine.

Meanwhile, the nicotine in inhaled tobacco products like cigarettes is absorbed via your lungs. This pathway delivers nicotine to your brain almost instantaneously — within 10–20 seconds of taking a puff.

Because it’s present in trace amounts and absorbed via digestion, the nicotine in tea is not considered to be capable of producing the same immediate, addictive effects as nicotine that’s inhaled into your lungs.

Nicotine in tea is not addictive

Due to its extremely low levels and slow absorption rate, the nicotine in tea is not addictive.

It does not cause nicotine cravings or trigger nicotine addiction, nor will it cause any side effects. Thus, tea is safe for people who are trying to quit tobacco products.

In fact, emerging research in rats shows that the antioxidants in green tea may help treat nicotine toxicity, which is cellular damage to the heart, lungs, kidney, and liver caused by excessive nicotine intake.

However, as this research is ongoing, it’s unclear whether green tea would provide the same effects in humans.

You can rest assured that the trace amounts of nicotine in tea are not harmful or addictive.

As such, it’s perfectly safe to drink tea — whether you’re limiting your use of nicotine products or trying to quit them altogether.