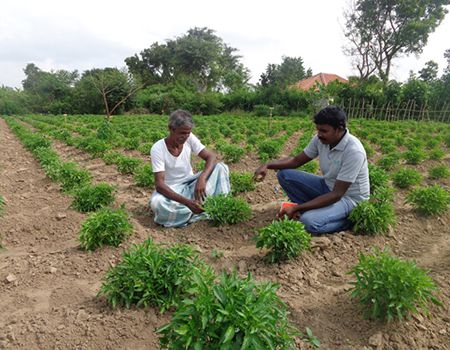 To applause from the audience that comprised high officials, the President determinedly declared that import of inorganic fertilisers will be “banned” in the near future to “protect” Sri Lankans from the adverse effects of such chemicals on the “health” of the larger population. That was on April 22. The Cabinet approved the proposal of the President to ban all imports of inorganic fertilisers and going one step further, agrochemicals, with immediate effect on April 26. The President reconfirmed the ban at another meeting April 29 and appointed a committee to carry out his decision.

He further stated that organic/carbonic fertilisers will be made available to the farming community under the fertiliser subsidy scheme and any crop losses by adopting organic agriculture will be monetarily compensated with the savings from the chemical fertiliser import ban estimated at Rs. 80 billion. Well said! On page 39 of the manifesto “Vistas of Prosperity and Splendor”, it was stated that the entire Sri Lankan agriculture will be promoted to use organic fertilisers during the next 10 years. It is now fast-tracked and a complete ban on import of inorganic fertilisers and agrochemicals is imposed with immediate effect. The first country in the world to do so and the President seems to be proud of this “achievement”!

What is organic agriculture?

“Organic agriculture is a holistic production management system which promotes and enhances agro-ecosystem health, including biodiversity, biological cycles, and soil biological activity. It emphasises the use of management practices in preference to the use of off-farm inputs, taking into account that regional conditions require locally adapted systems. This is accomplished by using, where possible, agronomic, biological, and mechanical methods, as opposed to using synthetic materials, to fulfil any specific function within the system.” (FAO/WHO Codex Alimentarius Commission, 1999).

Above is the definition of Organic Agriculture well-described by the UN’s Food and Agriculture Organisation.

IFOAM Organics International published in February 2020 that 71.5 million hectares of worldwide farmland are organic. This is a mere 1.5 per cent of global farmland. The countries with the largest organic share are Liechtenstein (38.5 per cent), a tiny 160 square km country with a population of less than 40,000 and a per capita GDP of US$ 98,500, Samoa (34.5 per cent), landmass of 2,842 square km with a population of little over 200,000 and a per capita GDP of nearly $6,000 and Austria (24.7 per cent), 83,879 square km country with nearly 9 million people and a per capita GDP of over $50,000. In 16 countries worldwide including the above three, 10 per cent or more of all agricultural land is organic. This is the result of the hard work done by those governments and organisations such as IFOAM in the past 3 to 4 decades. (IFOAM was established in 1972.) In the US, extent of organic farms is less than 1 per cent.

Can Sri Lanka with a population of nearly 22 million and a landmass of 65,000 square kms and a per capita GDP of less than $4,000 be 100 per cent organic overnight? A question to which the promoters of “Be Organic, Ban Chemical Fertilisers and Agrochemicals” campaign should provide an answer.

Organic agriculture and its overall impact on crop yields

In 2019, Prof. Holger Kirchmann of the Swedish University of Agricultural Sciences in Uppsala wrote in his paper “Why organic farming is not the way forward”, that yields of organically cropped legumes were 20 per cent and non-legumes 40 per cent lower than those of conventionally grown crops. Over all crops, the organic yield gap was 35 per cent. Based on Swedish statistical data, the condition to compensate for a 35 per cent yield gap would mean increasing the arable land by about 50 per cent. (His published paper can be found at https://journals.sagepub.com/doi/10.1177/0030727019831702.)

The above statistics are from a research conducted in Sweden, a temperate country where relative humidity and temperature are much lower than those of tropical Sri Lanka that provides a comfortable breeding ground for pests and diseases due to year-long high temperature and relative humidity. Unless the so-called organic crops are given a dose of inorganic fertilizers and agrochemicals “during the nights”, the overall impact on yield in Sri Lanka could be 50 per cent or more. Can Sri Lanka double the cultivated land extent of 2.3 million hectares to compensate for the loss of 50 per cent yield by going totally organic overnight? In contrast a pest attack can have devastating results of even a 100 per cent yield loss. As the President suggested, the farmers will be monetarily compensated for yield loss. But what about food security? Will the country have sufficient food to feed 22 million? Would the saved Rs. 80 billion be sufficient to import food and pay compensation to farmers? Professionals have predicted a bill of Rs. 800 billion to import food to meet the gap.

There is no doubt that the farmers are using excessive volumes of fertilisers due to two reasons; firstly, because it is given at a highly subsidised price and secondly because the supplied fertilisers are of very poor quality. This has pushed us to use 287.2 kg of fertiliser per hectare of cultivated land, the highest in the region. Problem lies here, not in the use of inorganic fertilisers.

In the case of agrochemicals, the environmental pollution due to excessive usage takes place due to lack of knowledge due to extremely poor agricultural extension service in the country. The farmer’s “extension agent” is the retailer of agrochemicals who either recommends a cocktail of products or sells the product that gives him the highest sales commission.

So called organic fertilisers are defined as organic manure due to their very low nutrient contents. A kilogram of urea contains 460 grams of nitrogen or 46 per cent whereas a kg of compost contains 30 grams of nitrogen unless the manufacturer “adds” urea solution during the manufacturing process. The farmer has to add 15 times more manure to obtain the same quantity of nitrogen that is given by urea. Moreover, only 3 per cent of the nitrogen applied by way of compost is readily available to the plant. The balance 97 per cent will have to be broken down by soil microorganisms and will be available within 12-18 months. The same scenario prevails with the other major nutrients, phosphorous and potassium. The best compost manure can have a NPK ratio of 3:2.5:1.5 unless inorganic fertilisers are added.

Can a farmer apply around 5 to 6 metric tons of organic manure to every hectare? Assuming it is done, the total annual requirement of organic manure in the country will be a massive 11.5 million metric tons. Can this be supplied? The State Ministry in charge of fertilisers assures to “import” organic manure in case of a shortfall. What about the pathogens coming along with imported organic manure? Yet another “disaster” in the making. Another pertinent question would be the inapplicability of organic manure in modern hi-tech such as protected agriculture, drip irrigation etc that were “promised” to be promoted through “Vistas of Prosperity and Splendor”.

A major portion of conventional fertilisers applied to crops is lost due to leaching, evaporation, runoff etc that pollutes the environment. In developed and many developing countries, the impact of inorganic fertilsers on the environment is arrested by introducing quality assured second and third generation fertilisers along with advanced technologies such as fertigation (fertilising through drip irrigation systems), using artificial intelligence and drone technology to spot pests diseases and deficiencies of crops to minimize the use of fertilisers and agrochemicals by spot applications.

Therefore, the solution to avert environmental impact and health hazards to the farming community and the general public from inorganic fertilisers and agrochemicals is not an arbitrary, sudden and mischievous ban but the introduction of high quality second and third generation fertilisers replacing the first generation fertilisers through the private and public sector organisations and streamlining the agricultural extension service to promote judicious use of agrochemicals, perhaps as a public private partnership with like-minded private sector companies and institutions.

The decision to immediately ban imports will have devastating repercussions and inevitable food security issues in a few seasons, perhaps leading to a famine in the country. Pundits who promoted this would not be there to answer the public when it happens, and the government will solely be answerable for its decision.