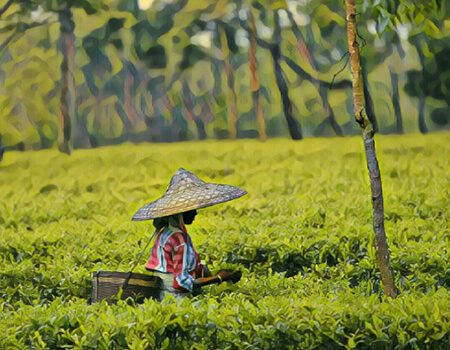 Pune: Researchers at the Institute of Advanced Study in Science and Technology (IASST), Guwahati, an autonomous institute under the Department of Science & Technology (DST), have found significant plant-growth-promoting and antifungal activities of endophytic Actinobacteria associated with the tea plant and related genera, Eurya, to find potent plant growth-promoting strains. The application of endophytic Actinobacteria could reduce chemical inputs in tea plantations.

With norms growing restrictive on pesticide use in many countries, tea exports are harmed in the process. Now Indian scientists have come up with a solution to reduce the use of such chemicals in tea plantations.

The team led by Dr Debajit Thakur from IASST isolated 46 endophytic Actinobacteria, predominantly free-living microorganisms found in diverse environments that lives within a plant for at least part of its life cycle without causing apparent disease associated with Tea plants and characterized through molecular techniques. Out of 46 isolates, 21 isolates inhibited the growth of at least one test fungal phytopathogens, and strains SA25 and SA29 exhibited broad-spectrum antifungal activity.

Most of the endophytic Actinobacteria isolates having antifungal activity showed presence of chitinase, NRPS (nonribosomal peptides synthetase) or PKS-1 (Polyketide Synthase) gene, suggesting the presence of distinctive mechanisms to inhibit the growth of pathogenic plant fungi. Actinobacterial strain SA1, T1LA3, and SA14 were further tested for their efficacy in promoting the growth of commercial tea clones namely, TV1, TV9, TV18, and TV22 in nursery conditions. All the endophytic isolates tested showed significant differences in terms of plant growth-promoting parameters in the treated plants compared to untreated control.

The research finding confirms that endophytic Actinobacteria have the potential to exhibit multiple growth-promoting traits such as IAA (indole acetic acid) production, phosphate solubilization, siderophore production and so on that positively influence tea growth and production and can hence be used in the management and sustainability of the tea crop.

Tea (Camellia sinensis) plays an important role in the Indian economy as a major portion of the tea produced is exported. However, in recent years, due to higher demand for chemical residue-free made tea by the importing countries has led to a decline in the export of tea. The present study attempts the use of endophyticactino bacteria having plant beneficial characteristics to reduce and replace the use of chemical inputs in the tea industry.

The study is publicised in the peer-reviewed scientific journal, Frontiers in Microbiology.