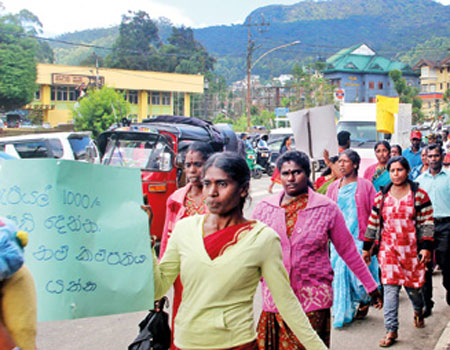 The indefinite strike launched by estate sector trade unions this week had a crippling effect on plantations, with work at most estates grinding to a complete halt by the weekend. The workers are demanding their basic daily wage be increased from Rs. 500 to Rs. 1000. With Regional Plantation Companies (RPC) again doubling down on their “final offer” of a basic wage increase of Rs 600, and with no possibility of a Government intervention, the issue threatens to drag on for weeks unless the two sides agree on a compromise.

The strike, launched on December 4, is costing approximately Rs 240 to Rs 250 million in losses each day in the tea and rubber industry, acknowledged the Planters’ Association of Ceylon, the collective body representing the RPCs.

Issuing a statement on Thursday, the association reiterated that its membership was firm in their stance that a 100% increase in daily basic wages, as demanded by the unions, simply cannot be sustained by the industry.

The statement drew a swift response from S. Arulsami, Vice President of the Ceylon Workers’ Congress (CWC), which is spearheading the indefinite strike. “If they are adamant, we also can be adamant,” Mr Arulsami told the Sunday Times, adding that a negotiated compromise was a give and take process. Mr Arulsami said unions had to hold several rounds of negotiations with the companies even to get them to agree on their so-called final offer, a 20 percent basic salary increase, which hiked the daily basic wage from Rs. 500 to Rs. 600. “They were treating us like beggars. We will not tolerate that,” he stressed.

He said if the companies came with a reasonable offer, they too are prepared to negotiate. Terming the ongoing strike a complete success, Mr Arulsami claimed several companies had privatelyreached out after the strike was launched, stating they were willing to increase the basic daily wage to Rs 700.

Three trade unions, the CWC, Lanka Jathika Estate Workers Union (LJEWU), and the Joint Plantation Trade Union Centre (JPTUC), are signatories to the current collective wage agreement with the plantation companies. LJEWU General Secretary, United National Party Parliamentarian Vadivel Suresh though, said, while they supported the strike, they were cautioning the workers about engaging in it given the political instability in the country. he said there was currently no Labour Minister or even a Government to intervene in the matter. “If the strike continues, the workers will lose their wages and January is a month where there are so many expenses to be met,” he noted, pointing out that the Thai Pongal festival falls in January, while the new school term also starts.

Mr Suresh too acknowledged that unions had to hold multiple rounds of discussions before companies even offered to hike the basic daily wage upto Rs 600. Under the circumstances, he said, the best course of action was to wait till the current political issues are sorted out in court and Parliament in the next few days. “We are confident we will be able to form a Government and (UNP Leader) Ranil Wickremesinghe has assured us that the estate workers’ wage issue will be given priority at its first Cabinet meeting.”

Mr Arulsami of the CWC however, insisted that there was no need for any Government intervention as this was a trade union issue between the employers and employees.

The latest offer by the Planters’ Association proposes a 20% increase in the basic wage from Rs. 500 to Rs. 600, a 33% increase in the Attendance Incentive up to Rs. 80 plus the Productivity Incentive and Price Share Supplement, totaling to Rs 940 per day, which the association claims will amount to an average increase of Rs 3375 a month per worker.

“Extreme demands for a 100% wage hike could only be sustained if the average sale price of Sri Lankan tea at the auction was to increase up to Rs. 850 per kg. As og November this year, the average sale price of tea stood at Rs. 558 per kg while the Cost Of Production (COP) is Rs. 630 per kg,” the Planters’ Association stressed meanwhile. The association further said plantation companies would have to absorb a staggering Rs 20 billion increase in wage and gratuity costs if the basic wage is to be increased by 100% to Rs 1000.

The association further observed that the price of Sri Lankan tea in international markets has been continuously dropping by approximately Rs 20 each week over the recent past while almost 35% of tea produced went unsold at the last auction. Meanwhile, the Rubber COP stands at approximately Rs. 360 per kg where the average selling price is just Rs. 230 per kg.

Plantation companies represented by the Planters’ Association continue to insist that the best solution is to move away from the daily wage model and go for a more modern, productivity based model. It claims that in estates where a revenue share model has been successfully implemented, workers are now earning between Rs.50, 000 to Rs.80, 000 a month.

Mr Arulsami however, disputed this. “The industry can’t impose such a model overnight. There needs to be wide ranging discussions on the subject before taking a decision,” he said.

The veteran trade unionist said if plantation companies came up with a “reasonable proposal,” there was still room for the matter to be resolved soon.

Any new wage formula for estate workers should have a higher component to incentivise attendance and productivity, the Sri Lanka Tea Factory Owners’ Association stated.

In an emailed statement, the association’s President Harith Ranasinghe pointed out that tea smallholders are responsible for 70% of tea produced in the country and a large portion of this is processed in the association’s member factories. “It is well known that less than 20% of tea smallholders manage their fields by use of family labour. The rest depends on hired workers,” Mr Ranasinghe noted.

According to Mr Ranasinghe, for non-corporate tea estates, a 20% increase in worker wages may lead to serious viability issues. This can have far reaching consequences on the industry.

He pointed out that Wages Board decisions on the tea growing and manufacturing sector often followed parallel to the decisions of the Collective Agreement between unions and employers. This may happen again, he noted. “Non- Corporate tea estates and tea processing factories, of which a majority are members of our association, are bound by the Wages Board decisions. Any unrealistic, unaffordable increase imposed on corporate sector will eventually filter down to unacceptable, unaffordable increases in wages in tea growing and manufacturing sector.” he warned.

The main problem faced by the tea factories, as far as workers are concerned, is the poor attendance of the workers to handle the fixed workload, he opined. “Therefore, we wish any new wage formula to have a higher component to incentivise attendance and productivity,” he added.