In eastern and western Himalayas, conflict between leopards, humans to increase as habitats overlap: Research 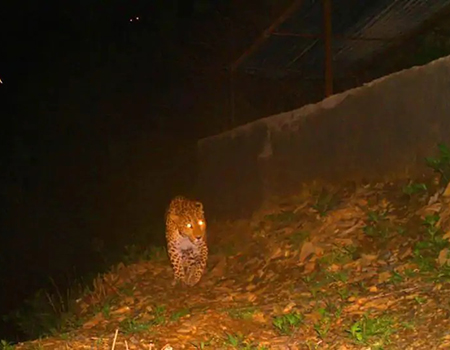 The research paper titled “Landscape predictors of human–leopard conflicts within multi-use areas of the Himalayan region” was published by scientists from Wildlife Institute of India.

With man-leopard conflict on the rise, a recent study by Dehradun based Wildlife Institute of India (WII) in eastern and the western Himalayas shows that leopard conflict will only increase in the future as leopard and human habitats are increasingly overlapping.

The research paper titled “Landscape predictors of human–leopard conflicts within multi-use areas of the Himalayan region” was published by scientists from WII.

In the paper, the researchers tried to identify the landscape features which increased the probability of man-leopard conflict in the context of the attack on cattle (livestock depredation) by leopards near human habitations.

The results from the study were used to map potential human–leopard conflict hotspots across parts of the Indian Himalayan region.

The study states, that with rapid loss of forest cover and anthropogenic (due to humans) impacts on their habitats, large carnivores are forced to occupy multiuse landscapes outside protected areas.

As part of the project, the researchers studied 857 attacks on livestock in eastern Himalaya (parts of North Bengal) and 375 attacks in western Himalaya (Pauri Garhwal district in Uttarakhand) by leopards between 2015 and 2018.

The experts found that the risk of a leopard killing livestock increased within a heterogeneous landscape matrix comprising of both closed and open habitats (very dense forests, moderate dense forests, open forests, scrubland and non-forests).

S Sathyakumar, senior scientist at WII said that landscape is very important when trying to understand the human-leopard conflict in the Himalayas.

“If you have a good forest, but several small patches of degraded forests, along with villages, then the matrix of the neighbouring forests do not have wild prey which a leopard can hunt and kill. Our studies have shown that forests outside protected areas whether big or small, do not support large densities of wild prey which can support leopards in turn inside the forests. Hence, leopards are surviving outside protected areas and in human habitations as there are many supervised cattle, then dogs, or small animals like chicken, rodent, deer which the animal can eat,” said Sathyakumar.

He added that unlike tigers, which need very good forest cover without any human disturbance, “leopards are not like that and can survive anywhere even with small patches of degraded forest cover, as long as there is enough cover to hide.”

“In the western Himalayas, be it Uttarakhand or Himachal Pradesh, farmlands which have been abandoned due to migration have become secondary scrubs or secondary forests, and act as a refuge for leopards. We piloted fox lights as part of the study, where we demonstrated that these kinds of new technologies can be used to reduce problem due to leopard in the areas of North Bengal and Pauri Garhwal, which are hotspots of human-leopard conflict in the Indian Himalayan region,” added Sathyakumar.

He said that these two areas were chosen as they have reported the maximum number of conflict cases, be it injury, attack, death as well as livestock killing in the past decade.

Speaking on findings of the research, Dipanjan Naha, the primary researcher in this project and first author of the paper, said that the common perception is that leopards attack livestock during night hours, but there is a pattern in the attacks.

“Bigger carnivores like lions or tigers mostly attack livestock near protected sites, but for leopards, it has been learnt that it can attack in any place where there is sufficient cover for the animal to hide, be it in tea gardens of North Bengal or abandoned land in Pauri Garhwal due to migration. The animal is not coming out of its habitat, but rather the habitat of humans and leopards are overlapping. Leopards have successfully adapted to human habitations also which can lead to more attacks in the future,” said Naha.

The research paper mentions that results suggest that awareness about high-risk areas, supervised grazing and removing vegetation cover around human settlements should be initiated to reduce predation by leopards.

What has led to the fragmentation of forests?

According to WII experts, the increasing human population, declines in wild prey and changes in land-use patterns have resulted in fragmented, heterogeneous resource-limited landscapes for carnivores. Such anthropogenic impacts on ecosystems have forced carnivores to frequent areas near human settlements, kill livestock. This, in turn, provokes local communities to retaliate through poisoning, shooting, snaring and electrocution. Livestock depredation has been identified as the stimuli for human-carnivore conflicts. Retaliation also affects the overall functioning of the ecosystem by removal of non-target species like avian predators, scavengers and larger predators within the shared landscapes, who feed on the poisoned carcasses.

Importance of conservation within shared landscapes

The research stressed that conservation within shared landscapes is challenging considering the socio-cultural, political problems where it is crucial to ensure the safety of human lives, property, livelihoods and well-being. In India, human-leopard interactions are especially intense within such shared landscapes where the size of protected areas is small, fragmented and comprise only 5% of the geographic extent of the country. Livestock and free-ranging domestic dogs comprise the primary prey for leopards outside of protected areas where crop fields, tea plantations provide cover.

Livestock are a direct representation for the agriculture-based society of rural India and loss to large carnivores represents a substantial threat to human welfare and livelihoods. Hence it is crucial to identify areas where leopards are more likely to attack livestock to plan management interventions and implement mitigation measures.