Idukki registered the highest growth rate of 38.89 per cent in the state than the previous year with around 2,48,052 tourists visiting the state in the first three months of the year. 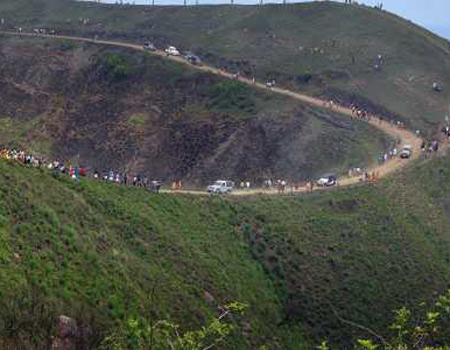 THIRUVANANTHAPURAM: It seems both domestic and international tourists who visit the Gods Own Country are more interested to date with the natural treasures in Idukki where the impeccable charm of valleys and mountains, green carpet of tea plantations, aroma of spices and tea wafting in the air, thick forests and thriving wildlife will make one fall in love with the place.

The statistics of first three months of the tourist inflow into the state in the current calender year reveals that Idukki is being emerged as one of the sought after destination in the state as it is leading in the tables in terms of robust growth rate and more number of tourists visiting to the famed hill station than the previous years.

On the domestic front, Idukki registered the highest growth rate of 38.89 per cent in the state than the previous year with around 2,48,052 tourists visiting the state in the first three months of the year against the 1,78,596 recorded during the same period in last year, followed by Alappuzha which registered 37.28 per cent growth.

On the international front, Idukki registered 60.91 per cent growth during this period whereas Alappzuha registered only 34.19 per cent during this period. However, Alappuzha handled more foreign tourists than Idukki as the backwaters in Alappuzha has been major attraction for the foreign tourists in the last couple of decades. But Idukki is being emerged as a strong contender for Alappuzha in terms of growth rate.

Another striking aspect in the analysis was the loss of Thiruvananthapuram as a major tourist attraction for foreigners. The capital city registered a negative growth (-4.51) with tourist footfall declining to 13,6547 from 14,3003 recorded a year ago during the same period. According to a senior Tourism officer, the decline in medical tourism arrival and drop in tourist arrival in Kovalam seems to be taking a toll on Thiruvananthapuram on international front

Whats is even more worrying is the fact that the data is pertaining to the first three months of the current year and the controversial murder of Latvian woman and Nipah outbreak happened in the second quarter of the year. And the tourism officials fear that the growth in the second quarter would be either negative or negligible positive growth, he said.

However, there the tourism industry as a whole has reasons o cheer in the first three months of the year as the foreign tourist international arrival has registered a growth of 12.13 per cent during this period and domestic tourist inflow to the state by 18.57 per cent, said Tourism Director P Bala Kiran, with Kochi continues to host the most number of tourists. Further, the Malabar region has also made some strides in the domestic tourism front.