How Many Calories Are in Tea? 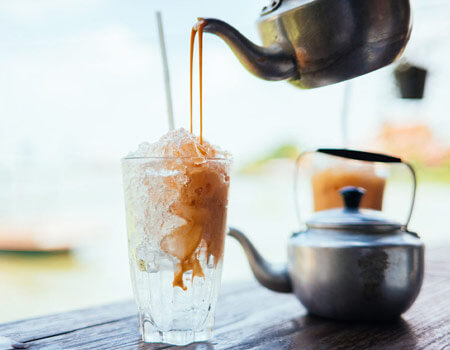 Tea is a commonplace drink consumed by two-thirds of the world’s population.

It’s made from Camellia sinensis, also known as the tea plant, which has been cultivated for thousands of years for its taste and medicinal properties..

This article examines how many calories are in various types of tea and provides tips on how to reduce your tea’s calorie count.

Tea is a minimally processed drink that’s generally prepared by pouring hot water over the leaves, buds, or stems of the Camellia sinensis plant, resulting in an aromatic infusion.

Since those parts of the plant contain only trace amounts of carbs, tea is virtually a calorie-free beverage.

For example, an 8-ounce cup (240 ml) of freshly brewed black tea offers barely 2 calories, which is considered negligible. The same goes for most infusions.

As such, plain tea makes an excellent substitute for sugar-sweetened beverages.

Calories in different types of tea

Although tea itself has almost no calories, popularly added ingredients like milk and sugar may considerably increase its calorie count.

Here are some widely consumed teas — along with their estimated number of calories.

These four teas come from the Camellia sinensis plant, with their main being the extent to which their leaves are fermented, if at all.

Green tea is non-fermented, while oolong and black teas are partly and fully fermented, respectively. White tea is considered a variety of green tea, as it’s minimally fermented.

When prepared only with hot water, their calorie count is as low as 2–3 calories per 8-ounce (240-ml) cup.

Yet, as sugar and honey are the most common ways to sweeten these teas, sprinkling in just 1 teaspoon (4 grams) of sugar adds 16 calories to your drink, while 1 tablespoon (21 grams) of honey adds 21 calories.

Herbal teas are infusions made by brewing herbs, dried fruit, leaves, flowers, or buds from plants other than Camellia sinensis.

Some popular herbal teas include chamomile, peppermint, lavender, rooibos, and hibiscus, which are renowned for their therapeutic properties.

Like traditional teas, their calorie contents are considered insignificant. Some, such as hibiscus tea, even boast no calories at all.

Still, if you add sweeteners or dairy, the number of calories increases.

Milk tea is prepared with a 1:1 ratio of tea to milk — usually whole milk for extra creaminess. It’s typically sweetened with sugar or honey, and some recipes include spices like salt, cinnamon, and cardamom as well.

While black tea is most commonly used, you can use any type of tea to prepare milk tea.

If you use 4 ounces (120 ml) of whole milk for an 8-ounce (240-ml) beverage, it will pack 75 calories from the milk alone. However, you can reduce the count to 42 calories by merely switching to skim milk.

Remember to consider your choice of sweetener, as some sugar substitutes can be used to sweeten without adding extra calories.

Tea latte is a variation of milk tea prepared at a 1:3 ratio of tea to milk. Therefore, its higher milk content packs more calories.

It has become very popular in tea shops and coffee chains, which tend to add flavored syrups as well. These additives further increase the calorie content of your drink.

As boba tea has gained popularity, some shops have started adding jelly, egg pudding, and fruit juice as well.

Its calorie content varies greatly, as you can add ingredients to your liking. All the same, it’s estimated that 16 ounces (480 ml) of bubble tea packs 200–450 calories.

Iced and sweet teas are cold versions of black tea that are usually flavored with lemon, peach, or mint. Their main difference is their added sugar content.

While they’re both American staples, sweet tea is more common in Southern states, while unsweetened iced tea is typically served in the North.

As its name suggests, sweet tea is sweetened with sugar — and its calorie content depends on the amount added. In contrast, unsweetened iced tea is consumed without it, and therefore doesn’t contain calories.

Remember that every teaspoon (4 grams) of sugar adds 16 calories to your tea.

Nonetheless, some popular brands don’t differentiate between iced and sweet tea and may sell their iced teas sweetened. In those cases, the total number of calories significantly increases. Therefore, it’s important to read the label to check for added sugar.

Thai tea is another version of milk tea that’s popular in Southeast Asia.

Served either hot or cold, it mixes black tea, sugar, and sweetened condensed milk and is topped with either coconut milk or whole milk.

These heavy ingredients give a single 8-ounce (240-ml) serving 160 calories.

This flavorful milky beverage is made from black tea, heavy cream, sugar, and a mix of spices — usually cardamom, ginger, cinnamon, pepper, and cloves.

Heavy cream is particularly high in fat. It boasts 100 calories per ounce (30 ml).

Chai tea may also be served hot or cold. Unlike regular milk tea, which is brewed in water first, chai is brewed directly in milk.

As chai recipes vary, so does the drink’s calorie content.

How to reduce your tea’s calorie count

There are multiple ways to reduce the calorie content of your favorite tea. Here are a few tips:

As tea is easy to make at home, you can exercise quite a bit of control over what added ingredients you use — if any.

Plain teas, such as green, black, oolong, and white, as well as herbal teas, are virtually calorie-free.

However, other popular varieties may include milk, sugar, syrup, and other high calorie ingredients. In fact, just 16 ounces (480 ml) of bubble tea can pack up to 450 calories.

Still, you can lower your tea’s calorie content by swapping out some of its ingredients or simply drinking it plain.