How Chai Arrived in India 170 Years Ago 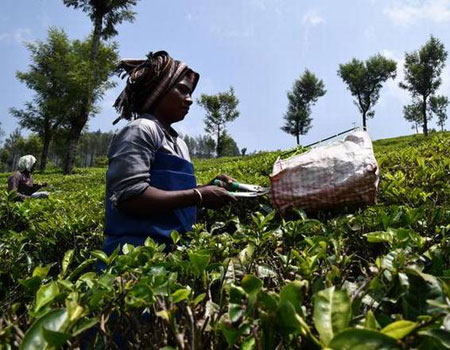 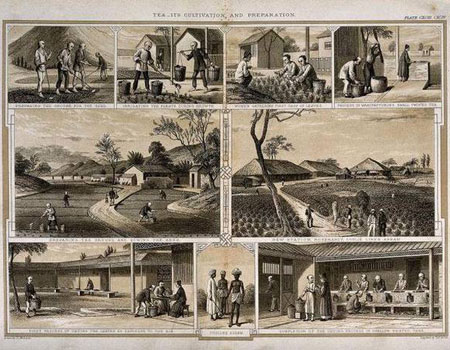 Britain’s first taste of tea was belated — the Chinese had been drinking it for 2,000 years. The English diarist, Samuel Pepys, mentions tea in his diary entry from September 25, 1600. “Tcha,” wrote Pepys, the “excellent and by all Physicians approved, China drink,” was sold in England from 1635, for prices as high as £6 to £10 per pound of the herb (£600 to £1,000, today). In 1662, when King Charles II married the Portuguese princess, Catherine of Braganza, her dowry constituted a chest of tea, and the island of Bombay for an annual lease of £10, equivalent then to the cost of a pound of tea in England. Catherine, who was used to drinking tea in the Portuguese court, had her first sip of the beverage in England in May 1662 — the month of her wedding — at Portsmouth.

In the 18th century, Dutch firm J.J. Voute & Sons ruthlessly exploited the incapacity of the English East India Company to supply tea to Britain’s thriving domestic elites and coffee houses, smuggling about eight million pounds of tea, annually. Yet, Dutch tea soon became a “name for all teas that are bad in quality and unfit for use.” Meanwhile, the English company began strengthening its commercial ties with China, as Bombay turned into the seed of British India’s commerce, escalating all other European — especially Portuguese and Dutch — operations.

However, with resources depleted due to the Anglo-Dutch wars, by the 18th century, the English were unable to afford the silver that China demanded for continuing trade with Britain. To counter smuggled tea, on the one hand, and the increasing Chinese demand for silver on the other, the British responded by growing opium in India — largely in Bengal, Patna, Benares and the Malwa plateau — and smuggling it into China, in exchange for their beloved beverage.

Still, British tea cultivators were extremely anxious to have Chinese tea and techniques brought to India. In 1788, The Royal Society of Arts began deliberating on the idea of transplanting saplings from China. Then, in 1824, tea saplings were discovered in Assam by Robert Bruce and Maniram Dewan. Tea plantations later expanded across Assam and Darjeeling. In a 19th century lecture to the Royal Society, it was noted that around this time, carpenters and shoemakers from Chinese settlements in Calcutta were being sent up to Darjeeling or Assam, “presumably on the belief that every Chinaman must be an expert in tea cultivation and manufacture,” although many of them had never even seen a tea sapling.

After the Charter Act of 1833, the East India Company lost its trade monopoly with China. The Tea Committee was established in 1834, under William Bentinck, the then Governor-General of India. Also in 1834, Charles Gutzlaff and George Gordon were commissioned by the firm, Jardine Matheson, to undertake an opium voyage to China. While there, they were also expected to extract tea seeds, techniques and resources from the Chinese. The mission was not quite successful.

A decade later, in 1843, Robert Fortune, a Scottish horticulturalist, independently travelled to China to study its tea plantations. His travels were funded by the Royal Horticultural Society that was eager to extract plant samples and botanical intelligence from China in the wake of the Treaty of Nanking, signed in 1842, that ended the First Opium War.

On his return to Britain, Fortune published Three Years’ Wandering in the Northern Provinces of China (1847). Enthused by his discoveries in the Celestial Kingdom, Dr. John Forbes Royle recruited Fortune, on behalf of the Company, as a scout. He was to perform the great British tea heist. A man of modest means, Fortune gladly accepted the £500 annuity from the East India Company, five times his previous earnings. Besides, he was given the commercial rights to any other horticultural specimen he might be able to smuggle out, thus opening up for him a lifetime opportunity to exploit the thriving market among the English elite for exotic botanical specimens and nurseries. Little was it known then that Fortune would soon change the fortunes of the tea industry in Britain.

In the autumn of 1848, Fortune entered China on a great espionage mission, accompanied by his servant Wang, whom he refers to in his account simply as ‘coolie’. It was suggested that Fortune shave his head, and don the disguise of a mandarin. The two headed to a factory in the hills of Wuyi Shan, thence travelling from Shanghai via Hangzhou to the tea plantations of Zhejiang and Anhui. It was an exhausting three-month expedition.

After inspecting the 2,000-year-old tea manufacturing process in the Chinese highlands, Fortune returned to Shanghai in 1849, from where he contacted his employers in London. “I have much pleasure in informing you,” he wrote, “that I have procured a large supply of seeds and young plants which I trust will get safely to India.”

He also relayed his discovery that the Chinese were given to doctoring their tea exports to Europe with ferric ferrocyanide (Prussian blue) and gypsum salts, in order to achieve the desired colour in green tea, which impressed the Europeans. “No wonder,” believed Fortune, “the Chinese consider the natives of the West to be a race of barbarians.” Inadvertently, China had been poisoning Europe. It was Fortune’s discovery, too, that black and green teas are essentially the same species of the shrub, Camellia sinensis, except that the former variety was cured or ‘fermented’ for a longer period.

Fortune pinched about 13,000 plant samples and 10,000 seeds, and managed to smuggle them out in glass bottles through Hong Kong and Calcutta. With these new plants, British planters were able to dig their feet firmly into the home-bred tea industry in eastern India. Firms and advertisers in London began branding the teas in tandem with sugar from the plantations in Caribbean slave colonies.

The story of Fortune’s robbery and the subsequent great surge in the Victorian tea industry has been remarkably well recorded by Sarah Rose in For All the Tea in China (2009). Besides tea saplings, Fortune also purloined samples of the poisonous tea dyes inside the folds of his cloak. Rose writes that these samples, displayed at the Great Exhibition in 1851, “marked the moment when tea, the national drink of Britain, came out of the shadows of myth and mystery and into the light of Western science and understanding.”

Even before Fortune’s adventure, Jardine Matheson had ensured that Assam tea was a merchandisable Indian product in London. Maintaining a steady flow of Chinese planters in India, and strong networks of opium smuggling in China, Matheson’s became the model for later Indian and Ceylonese tea companies to recruit Chinese planters, lasting well into the 1840s. Indian tea was first shipped to London in December 1838, and was auctioned at India House in January 1839 for 5 shillings to 34 shillings a pound, the highest variety selling at 34 times the price of its cultivation in an Indian tea estate.

In 1853, Fraser’s Magazine suggested that India and not China was the “natural home of the tea plant”. By 1888, Indian tea exports into Britain were over 86 million pounds, exceeding China’s 80 million pounds. Erika Rappaport, author of another fascinating tea-history, A Thirst for Empire (2017), writes that in the 1890s, the virtues of Indian tea and assiduous Indian planters were eulogised in Victorian London in order to advertise China’s backwardness and deceitfulness. Large volumes of adulterated Chinese tea were seized by the Customs and thrown into the Thames. Advertisements such as this one, from A Pure Indian Tea Supply Agency, flourished in Victorian London:

In the 1880s, Indian pedigrees of the beverage colonised London as well as Ireland, Scotland, many other parts of Europe and the United States. The Indian Tea Store came up on Oxford Street in 1881, followed quickly by many replicas. Tea grown in India or Ceylon was merchandised in ostentatious boxes, made of wood snaffled out of timber forests in Dehradun, Simla or Rangoon. It was impossible not to be seduced by tea in London, now a demystified Cleopatra cloned into hundreds and thousands of Darjeeling or Assam boxes.

Back in India, the Darjeeling Himalayan Railway, which opened in 1878, was symbiotically rooted to the growth of Indian tea. The first major experiment of the Indian Tea Association — founded in 1881 — for globalising Indian tea began on the Indian Railways. By 1901, India had grown into a massive market for tea, and in 1903, the Tea Cess Bill was passed, regulating cess on tea exports, which would then be used for tea promotion in India and globally.

It was after World War I that Indian and Eurasian vendors, equipped with stoves and kettles, began selling tea at the historic railway stations of Bengal, Punjab and the Frontier provinces.

The Tea Association prided itself that “a better cup of tea could in general be had at the platform tea stalls than in the first-class restaurant cars on the trains.” Large hoardings and posters for tea recipes were put up in Indian languages, on several railway platforms, quite a few of which are still to be found in the domestic and suburban railway network of Bengal, at stations like Ballygunge, Dum Dum, Naihati, Bangaon, Shantipur and Ranaghat.

Fortune’s stolen gift to the British empire turned into a hybrid beverage in India, as local vendors began to add large quantities of milk and sugar into their tea. By the 1930s, a nation of erstwhile ‘teetotallers’ became the factory as well as market for British-packaged tea. By the 21st century, India consumed over 70% of its crop. From small-town railway stations to first-class compartments, tea and its accoutrements — the earthen pots, the glass tumbler, and the chai-wallah — became the ubiquitous symbols of a typical train journey.

As historian Lizzie Collingham writes, “The chai-wallah is still the first thing a passenger hears on waking up in a train in northern India as he marches through the carriages, a metal kettle swinging in one hand and glasses in the other, calling out ‘chai-chai-chai’.” As a noisy tea-vendor hands over a cup of tea from the other side of the window, we are reasonably convinced of being a race of tea-drinkers since the age of the Mahabharata — blissfully oblivious to how much we owe that satisfaction to a few serendipitous discoveries in the Assam and Darjeeling valleys, and a sneaky Scottish mandarin who patiently trekked up the mountains north of the Fujian and Jiangxi provinces in China a 170 years ago.